Signs of a big riot in Western Uttar Pradesh: Motorbike riders’ terror; they are pointedly firing at Muslims

Noida (Agencies): Two motorcycle-borne persons were fired at and badly injured in Dadri area of Greater Noida in the night of 9 August. The attackers too were motorcycle-borne. This is a very intriguing matter since within the last one month motorcycle-riding criminals have fired at and injured fiver persons in the same style in this area. What is more intriguing is that all the five victims belong to the Muslim community. As a result of these continuing attacks, there is a terror in the air, especially among the minority people of the area. 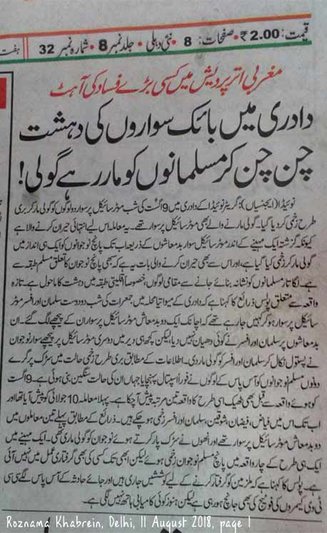 In the latest incident, according to Police sources, two persons identified as Salman and Afsar of Mewatia mohalla, were going somewhere last Thursday night by motorcycle. Two motorcycle-borne criminals started trailing them. Salman and Afsar did not give much importance to this until the pillion-rider of the trailing motorcycle shot at them. They fell injured on the ground and stayed there until some local people took them to a hospital where their condition remains serious.