Humra Quraishi 13 Sep 2018
Several years have passed by, yet till date there is no official closure on a grave matter concerning the unmarked graves of the Kashmir Valley.

Last weekend one news report hit to such an extent that I read it more than once and it also dragged along a significant offshoot.

And with this in the backdrop, I sat wondering what explanations we are coming out with, in the context of the unmarked graves scattered across the Kashmir Valley. It was almost a decade back, Dr Angana Chatterji, Professor of Anthropology at the California Institute of Integral Studies in San Francisco, and the co-convener of a rights watchdog, The International People’s Tribunal on Human Rights and Justice in Kashmir, had released a preliminary report in Srinagar: ‘Buried Evidence: Unknown, Unmarked, and Mass Graves.’ 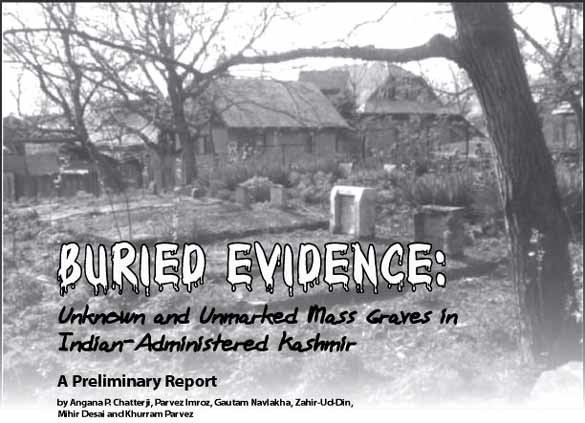 She had focused on the unmarked graves unearthed in and around the Kashmir Valley, after documenting the existence of 2,700 unknown and unmarked mass graves containing 2,943 bodies, across 55 villages in Bandipora, Baramulla, and Kupwara districts of Kashmir. …In fact, during the course of an interview given to me in 2009, she had come out with these details: “Of these, 87.9 percent were unnamed, 154 contained two bodies each and 23 contained between 3 to 17 bodies. Exhumation and identification have not occurred in sizeable cases.”

Several years have passed by, yet till date there is no official closure on a grave matter concerning the unmarked graves of the Kashmir Valley. This, when Chatterji’s findings were in depth. To quote her, “Grave-diggers and community members tell us that the bodies buried in these were routinely delivered at night, some bearing marks of torture and burns. In certain instances of fake encounter killings, where the bodies of victims have been identified, it was found that civilians resident in one geographic area in Kashmir were killed in another area. At times, these bodies were transferred to yet another area, then buried there. In one instance, we learned that the killings took place outside Kashmir, for example, in Gujarat….As an anthropologist I can say we were able to identify graves within selected districts and inquire into instances where photographic verifications and/or exhumations had taken place. Our findings do not include the forensic study of the exhumations. The graves, we were able to ascertain, hold bodies of men with few exceptions. Violence against civilian men has expanded spaces for enacting violence against women in Kashmir.”

Who all could be lying buried in these graves? “Mass graves may contain bodies of victims of political crimes and environmental disasters. In the context of massacre, gendercide, and crimes against humanity, mass graves contain more than one cadaver of persons whose physical and cultural characteristics are used to legitimise their death by the perpetrators. The intent of a mass grave is to perpetrate death with impunity with intent to kill more than one, and the graves in Bandipora, Baramulla and Kupwara are part of a landscape of mass burial.”

Around 2011, I had interviewed Meenakshi Ganguly, the South Asia Director at Human Rights Watch. She is also the author Everyone Lives in Fear, a report on the human rights situation in Jammu and Kashmir. Earlier, as a correspondent for Time Magazine, she has also reported on the conflict…And I had asked her to comment on the unmarked graves of the Kashmir Valley. And this is what she had to say: “These unmarked graves have existed in the Valley for years. Some presumably do hold bodies of unidentified militants as the government claims. But since ‘disappeared’ Kashmiri men have also been wrongly identified as foreign militants and buried, their bodies identified by family members when they recognized photographs of the killed person, we have long demanded that there be an investigation.”

Isn’t it time that we get to know who all lie buried in these unmarked graves of the Kashmir Valley? There is much speculation that the ‘missing’ men could lie buried. After all, all the missing couldn’t have crossed over to Pakistan! Not to be overlooked the vital fact that parents of the missing men have detailed that security agencies came knocking and took away their young sons. And with that, their sons were gone forever …disappeared! Fitted into the missing slot! There have been absolutely nerve-wrecking accounts of mothers who went looking for their sons in jails and detention centres of the Valley and even to the other cities and towns of the country, but couldn’t get to meet or even see them! Disappeared or dead! Probably the young men and boys couldn’t take the strain of the interrogation tactics. Mothers have told me that they had pleaded with the authorities to tell them the truth – that is, if their sons died during interrogation, then their dead bodies be handed over to the families but as expected their pleas went unheard. ..And half-widows of the Valley, whose husbands were picked up by security agencies and never got back, sit awaiting for their husbands’ return, but there’s that complete dead-end. Thousands of lives and families ruined for generations to come.