Hindutva twists the educational system to suit its sectarian agenda

Ruckus on the campus of the universities in Uttar Pradesh seems ongoing. The latest news reports of violence on the campus of the Allahabad University and before that in the Banares Hindu University and the Lucknow University speaks volumes of the political rot intruding into these once-upon-a-time great educational institutions. Alas no longer! Political mafia holding sway in the university departments, intruding right into the classrooms and hostels. Writ large is the fact that hired political goons are made to enter campuses to cause rifts and with that less of academics and more of a war like situation prevails there, complete with maar-kaat-dhar…Not to overlook the needless recent controversy that was made to erupt by vested political groups over an old, pre-Partition, portrait of Jinnah on the campus of the Aligarh Muslim University. 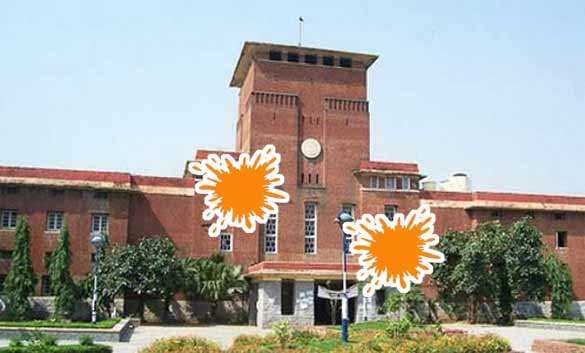 It’s simply shocking to see young students getting thrashed or rounded up or attacked. A complete failure of the system. In fact, in the last four years, the government of the day has caused tremendous damage to educational institutions and with that to the academic future of thousands of the youth of the country. Today, State tyranny has reached campuses where students are treated like criminals.

What had happened at the Hyderabad Central University campus and also on the campus of Jawaharlal Nehru University or even at the Delhi University were grim reminders of the level to which the State machinery could be used to crush young rebellious voices.Right-Wing’s intrusion was more than writ large after Rohith Vemula’s suicide on the campus of the Hyderabad Central University. It carried serious offshoots; students protesting outside the RSS headquarters in New Delhi were assaulted by not just the cops but also by the so-called ‘unidentified men’ -- goons with Right-Wing connections.

And exactly a year back goons had wreaked havoc on the campus of BHU, when girl students were molested. This, when the Yogi sarkar had flaunted the anti-Romeo squads or brigades they had set up to crush all possible Romeos. In the process, crushed were the hapless students. Academic mahaul wrecked, with sheer muscle power overtaking the campus.

Compounding the mess is the fact that there have been instances when students have been booked for speaking out or on the basis of morphed videos and images.No critical Facebook posts are tolerated by the political who’s who of this country. Several students were arrested for their comments on the rulers of the day. Are we living in a democracy or in the Raj or Raja days! I’m reminded of Professor Mushirul Hasan’s volume, he Avadh Punch: Wit and Humour in Colonial North India (Niyogi Books) where he writes of the Raj days when Indians could criticize the Brit rulers only through indirect and discreet ways - through cartoons and verse! The take off for the Lucknow published theAvadh Punch was to lampoon the Brit rulers through ‘safe’ ways. So heady was the outcome and response of the Avadh Punch that within a short span 70 Punches were published in several cities of this country. Don’t tell me we have reached that phase when the Avadh Punch or for that matter the Rajasthan or Madhya Pradesh Punch will have to be revived so that students can ‘safely’ relay their anger and disgust and hit out at the political rot.

Not to overlook another vital fact – the fact that Kashmiri students who have traveled all the way from the Valley to study in different universities and colleges of the country have been not just humiliated but even attacked by the so-called ‘outsiders’ who were allowed to enter the campuses to spread around violence. And in the last four years, instances of this hounding of Kashmiri students have gone up; perhaps, matching the communally-charged atmosphere prevailing in the country. Have we bothered to track and arrest the culprits or just about bypassed and overlooked are all these cases of sheer violence?

When the rulers of the day lace their speeches with words like ‘kashmiriyat’ and ‘insaniyat’ and ‘jamhooriyat’ do they ever put these words into practice and with that reach out to the Kashmiri students who are studying here and could be facing a harsh and hostile mahaul.

And no talk connected to students can be complete without the mention of the changes in the very syllabi right at the school levels. Blatantly dangerous onslaught on the very text. Changing of historical facts if not deleting chapters from the syllabi. Pointers to the fact that there is a well-planned strategy to change the very history. One news report after another of the Rajasthan government planning to remove an entire chapter from school textbooks, on the maker of modern India, Pandit Jawaharlal Nehru. Also, the Maharashtra government’s plans to remove particular history texts focusing on the Muslims rulers.And the RSS-affiliated Shiksha Sanskriti Utthan Nyas, headed by Dina Nath Batra, had sent a long list of recommendations to the National Council of Educational Research and Training (NCERT) demanding a host of changes in its textbooks: to remove English, Urdu, and Arabic words, a poem by the revolutionary poet Pash and a couplet by Mirza Ghalib, the thoughts of Rabindranath Tagore, extracts from painter MF Husain’s autobiography… Batra also wants references to the Mughal emperors as “benevolent”, the BJP as a “Hindu” party, the National Conference as “secular”, an apology tendered by former prime minister Manmohan Singh over the 1984 riots, and a sentence that “nearly 2,000 Muslims were killed in Gujarat in 2002” to be removed…Lurking in the background is the fact that the earlier demands of Nyas were fulfilled like the removal of AK Ramanujan’s essay “Three Hundred Ramayanas: Five Examples and Three Thoughts on Translation” from the undergraduate syllabus of the University of Delhi. Yes, Ramanujan’s essay was removed even from DU’s reading list.

I’m not being very original in stating that a sarkar that cannot take care of its young is damned. And this sarkar together with its offshoots in Uttar Pradesh is turning out to be nothing short of destroyers!