Ananth Kumar Hegde is known less as a Union minister and more for his communally-charged comments. Earlier it was this particular one-liner from him –“Till Islam is in the world, there can be no end to terrorism!” that was provocative enough and now comes more communal filth from him -- words along the strain that “hands that touch Hindu girls should be chopped off!”

Actually it would be prudent not to waste time and space and energy dwelling on his various poison-dripping communal comments which add to the political pollution around. Instead, it would be apt to give a shrill and loud cry for his ouster as a Minister! In fact, since he is talking so much about cutting and chopping limbs, so its best if he becomes a butcher! Yes, his next profession already lined out for him. 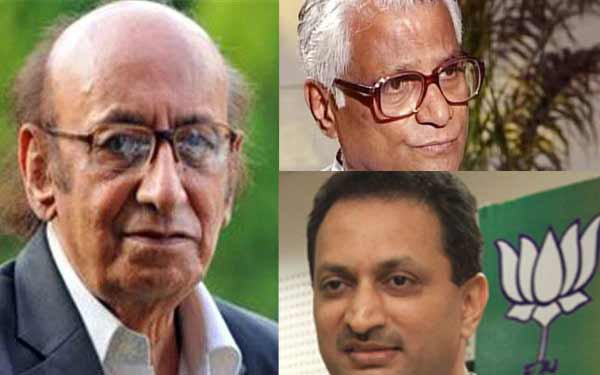 Though George Fernandes passed away this week, he had been battling Alzheimer’s disorder for the last several years…And as I have been writing all along, with AD destroying his memory cells, there remains nothing much to the affected person’s personality; affected is his or her very functioning. The AD-stricken could be technically alive but not really!

After all, AD is a degenerative disease or disorder that affects the memory cells. The memory cells start shrinking, fading, declining, deadening. And with that, affected is not just the memory but also the AD-stricken person’s entire personality. He or she finds it difficult to perform everyday tasks or even recognize his close relatives and family…and as it accelerates the speech and physical movements are greatly affected. In fact, patients start behaving like small children. Some withdraw into a shell, others turn aggressive and have to be handled with much care and sensitivity. And though till date there is no cure for AD but specialists stress on these very basics for the care givers – treat the AD-affected with much sensitivity and gentle handling. Also, avoid shifting the patients from his or her familiar home settings, as that could further aggravate their condition.

Nida Fazli passed away three years back but his verse continues to hold sway!

And as we near February 8, the day Nida Fazli passed away three years back in 2016, I’m sitting recollecting details to my two meetings with him in New Delhi, when he was here to attend mushiaras…I had asked him details to his poetic journey. And with that unfolded a rather tragic tale to Nida’s life ... Around the Partition time he was engaged to be married but the Partition played havoc. His own family and that of his fiancé migrated to the newly-carved country, Pakistan, but he did not move from here. He did not want to …He was left back all alone and with that faced emotional turbulence. Travelled around North India, till he came to Mumbai and settled there.

I must also add here that during my those two meetings with him, as our conversation picked up, it emerged that our families belonged to qasba Aonla in Uttar Pradesh, and that, of course, added to the connectivity factor … in fact, we spoke much more about our ancestral qasba Aonla and less of Mumbai and Bollywood.

I also recall that before saying Khuda Hafiz to Nida Fazli, I had to ask him one vital query: What happened on his personal front? In the backdrop of the failed take-off on his marriage front, what, with his fiancé shifting to Pakistan and he determined not to move from Hindustan.

“Well, I found a companion in Mumbai… have settled in Mumbai for good, forever!”

I had also asked him another connected query: in Mumbai even well-to-do Muslims find it difficult to buy or rent an apartment. Did he face any traumatic situation in this context?

“No, I haven’t faced any such situation …maybe, this could be because my companion is a non-Muslim.”

And whilst on my one lone journey to Mumbai, during the winter of 2006, I did get to talk to him once again. He didn’t encourage my visiting his home, so we spoke via the landline… And that noon when I spoke to him, he seemed in that outpouring mood. And once again said that he’d faced none of those usual tensions that apolitical Muslims faced post-Babri Masjid demolition. And he had once again said, "Maybe because my companion is a non-Muslim.” Blurted more, perhaps, as an add-on to the communal situation, “all this communal stuff is because of politics…its there to divide us. Politics hamayn tukray tukray may baat rahi hai"(politics is dividing us into bits and pieces.)

Interestingly, the very next day I’d heard a whole lot of harsh comments about Nida Fazli, from several Muslims I 'd met in Mumbai. They were critical of him- “Nida Fazli and his non-Muslim ways! Nida Fazli can hardly be called a Muslim …Hindus here are happy with such type of Muslims, who do nothing for the community and aren’t bothered about our identity, yet call themselves Muslims!”

Leaving you with Nida Fazli’s verse titled “Bombay” (translated from Urdu) tucked in the pages of the poetry volume ‘Kavita 93’ (Virgo Publications):

“Bombay What kind of place is this, This settlement where I find myself? A thousand echoing voices fill the air, Countless breathes seethe in the breeze.
As far as the eye can see There are shoulders, hips, shins, legs, But not a single face. In the morning, each one, young and old Removes his shiny eyes, His cheeks and smiling lips From the hollow of his head And puts them in his pocket.
It’s a strange city, There’s no day, no night, no dusk: The Sun rises from the bus seats; The moon rests in a dark hovel.
There is nothing here But trains and buses, Insensible seas crawling over the earth. Buildings swallowing buildings.
How can you awaken this grave island? You will be broken, struggling against yourself. There is not a single face To be seen.”