We, the members of CRPP,  West Bengal, are deeply shocked with the news of the sudden demise of SAR Geelani who happened to be the founder President of our all India Committee. A Kashmiri by birth SAR became a centre of discussion since the incident of parliament attack in 2001. He was the co-accused with Afzal Guru & had spent 22 months in jail. But since 2005 when the Supreme Court of India acquitted him, SAR relentlessly campaigned for the release of Afzal Guru. But when Afzal was finally hanged, SAR termed it as " the most cruel & politically motivated gimmick" of the then UPA government. In February 2013 Geelani along with some others participated in a protest programme in Delhi against the hanging of Afzal Guru. The incident was followed  by SAR's arrest by the Delhi police.

Nevertheless SAR Geelani remained vocal against all atrocious & undemocratic acts of the Indian government till his death. After the recent abrogation of article  370 & the shutdown in Kashmir Valley he strongly criticized the BJP government & stood in support of his fellow countrymen. But his undaunting character throughout his life made him such a big threat to the state that even after his death this all powerful Indian state is unwilling  to allow his dead body to enter his homeland. So it is quite obvious that when he was alive there was constant threat & state repression on him which we feel,  truncated his life.

Being an ardent supporter of human rights & a campaigner of the release of political prisoners till his last breath, SAR Geelani's sudden demise will be a big blow to the human rights movement of India.

Our salute to the beloved President SAR Geelani

Committee for the Release of the Political Prisoners (CRPP) (West Bengal) 25.10.2019

He was an icon of struggle for justice

Civil Liberties Monitoring Committee expresses its deep grief and sorrow on the sudden demise of Prof. Geelani who was working as a president of committee for the release of political prisoners (CRPP). CLMC by expressing its condolence states that prof. Geelani was an icon of struggle for justice.

Indian government tried utmost to suppress Prof.Geelani and his human right activities, there was a time when he was sentenced to death, but he never gave up his rights activism and continued his struggle to work for the cause of human rights and civil liberties.He was a ray of hope for the oppressed people and political prisoners.

He determinedly worked for the kashmiri people right to self determination because of which he was brutally attacked and due to this there were two bullets in his body removing them would have proved fatal. He was suffering a lot of pain because of these bullets.

He was very diligently attached to the people of Hyderabad and at the time of mecca masjid blast when the Muslims where targeted and detained, he extended moral and legal support and visited Hyderabad many times to express solidarity and participated in different programs for the rights of political prisoners. His role  for the release of Muslim youths is unforgettable.

Civil liberties Monitoring Committee express its solidarity with the family members of Prof. Geelani and hope that his daughter and son continue the legacy he has left behind and Prof. SAR Geelani will always be there in the heart of the people, and his work for the humanity will be written in golden words in history. 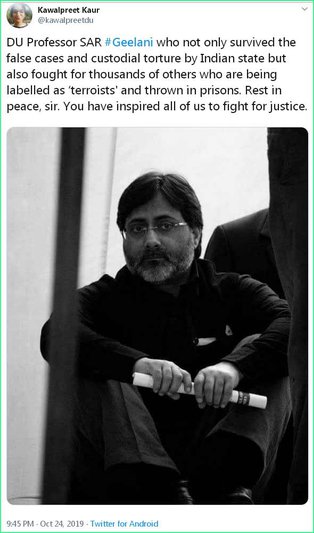 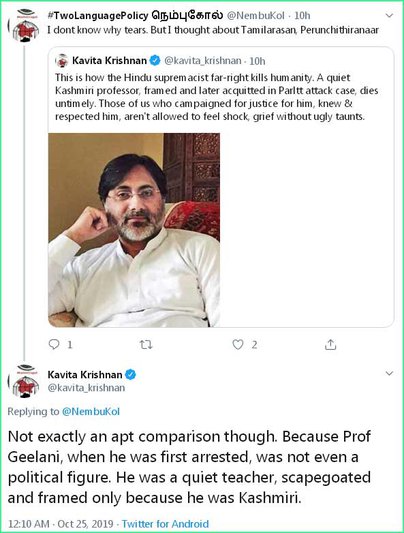 On 24-10-2019, evening Geelani went to gym, suddenly there he collapsed with cardiac arrest, while shifting to hospital on the way he left us for ever. It is a great loss to not only Kashmir People but to the entire democracy. Until his last breath he fought for the rights of the Muslims, Dalits, Adivasis, Political Prisoners and for their release. At this crucial stage the Kashmiri's and the suppressed people lost a great democratic leader. But this is not a natural death, we strongly feel that it happened due to the state repression only.

Now a days in our society the intellectuals, Democrats, activists and People are sailing in the same repression. Tomorrow it will happen to me and to you also.  So let's think,  raise the voice & save democracy.

We have to continue the aspirations and dreams of Geelani, this is the real tributes to our beloved leader Com.SAR Geelani.