The Milli Gazette 28 Aug 2012
This is surprising, because everyone thought that website content has been blocked because of Assam violence and exodus of people of North East India from Bangalore and elsewhere.
By Kashif-ul-Huda
Editor, twocircles.net

I woke up today to find a missed call from a BBC journalist in India. Talking to him, I found out that twocircles.net also finds mention in the list of webpages blocked in India. This surprised me as we have not published any objectionable articles or doctored photos of Assam or Myanmar violence.

In the last few days, Ministry of Communication & IT of Government of India has issued several circulars to all Internet service providers to block certain sites including youtube videos, facebook pages, and twitter accounts. Circulars give no reason for the blockage but simply a directive “It has been decided to immediately block the access to the following URLs” and then list the URLs that it wants blocked [URL or uniform resource locator,  is a specific character string that constitutes a reference to an Internet resource]. 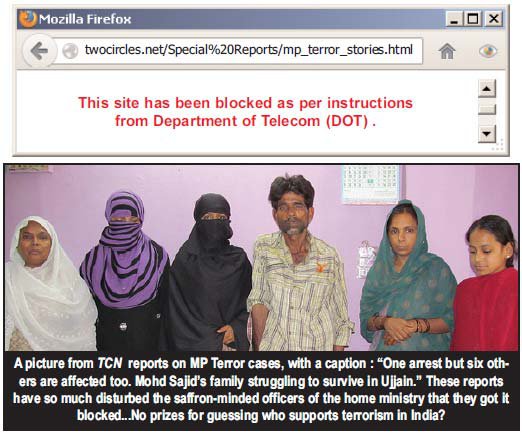 No one from the Indian government has reached out to us or asked us to take down the “objectionable content” and we will gladly entertain any request from govt., organizations or even from individuals if there are grounds for legitimate concern.

Later, thanks to a friend on twitter, I found out that the main page of our Madhya Pradesh series that we did a few months ago and whose banner is on display on top of each TCN page is not accessible in India. Trying to access it leads to a page with the message: “This site has been blocked as per instructions from Department of Telecom (DoT).” Very apt for a series whose title is “Unheard and Unspoken.”

This is surprising, because everyone thought that website content has been blocked because of Assam violence and exodus of people of North East India from Bangalore and elsewhere. Our Madhya Pradesh series talks about harassment of Muslims in the state and the series was done before the latest Assam violence erupted.

Second TCN page that got blocked (according to the documents on Kafila.org) is “Petty dispute leads to death of one in Mathura”.

Granted that there may be some webpages elsewhere that may be spreading misinformation but you can challenge rumour by providing more information, not by trying to block websites. Without going to the root of the problem, trying to control the violence in Assam or providing protection to people going back home, India is using this opportunity to censor legitimate voices and issues. How else one explains blocking of spoof twitter user accounts and TCN stories that have nothing to do with Assam violence.

Also, government doesn’t understand how easy it is to copy the information to a new webpage or to create a new twitter account. They cannot go on banning the whole internet. For example,  though the series page was banned in India, individual stories from the series can still be accessed. Here is the list of the reports in this series of Unheard & Unspoken: Terror stories from Madhya Pradesh:

Part 1: SIMI, an excuse to harass Muslims of Madhya Pradesh

Part 2: A trial of 11 years and counting

Part 3: Muslim youths of Ujjain: Harassed by police and media

Part 4: Robbing their peace and declaring them dacoits

Part 7: Multiple stories of an arrest

Part 8: Destroying their lives when not killing them in encounters