Creation of Israel is a conspiracy of imperialist powers

New Delhi: Muslim organisations led by Majlis Ulama-e Hind took out a massive rally at Jantar Mantar and Parliament Street here on the occasion of ‘Al Quds Day’ on the last Friday of Ramadan (17 August) in support of justice to the people of Palestine. The rally sent a clear message to the Indian and Israeli governments that Muslims of this country will in no case tolerate the mischievous and barbarous acts of Israel against the people of Palestine in general and the Holy Al Aqsa Mosque/Jerusalem in particular.

The rally was also a clear warning to Israel that its dream of greater Israel and demolition of Al Aqsa Mosque in order to build a Jewish temple on its site would never be fulfilled.

Majlis Ulama-Hind is a Shia organisation. It was able to get the support of other Muslim organisations like All India Muslim Majlis-e Mushawrat, Jamaat-e Islami Hind, Jamiat  Ulama-e Hind, Muslim Political Council and Welfare Party of India. Apart from this, a large number of people from Sunni population also participated in the rally in order to express their solidarity with the people of Palestine. Thus the rally gave a clear message that Palestine is not an issue only of Shia or Sunni but of all Muslims everywhere in the world. 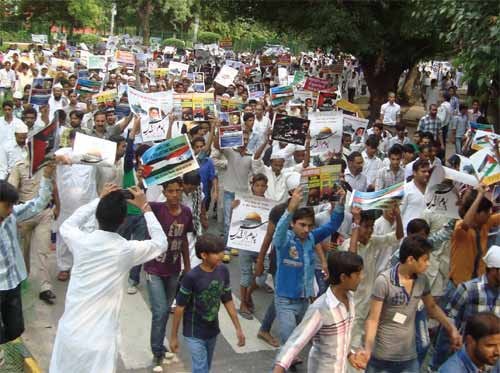 Maulana Jalal Haidar Naqvi, organiser of the rally and Joint Secretary of Majlis Ulama-e Hind said that Israel had let loose its cruelty and barbarism on hapless Palestinian people right from its creation and its ultimate aim is to create a Greater Israel by including parts of Syria, Iraq, Egypt and Hejaz. Maulana Naqvi warned that Muslims will not rest till they succeed in their objectives to bring justice to the people of Palestine who have been displaced and dispossessed by the Zionist project. He said that it was strange and regrettable on the part of India to have abandoned its traditional policy of friendship towards Arab countries in general and Palestine in particular and instead to strength its relationship with Israel by allowing that artificial country to invade Indian polity and markets. He further added that the harmful effect of the Israeli invasion is that ever since Israel opened its embassy here, cases of terrorism are rising in this country. Hence Muslims demand that Israeli embassy in Delhi should be closed down at the earliest. 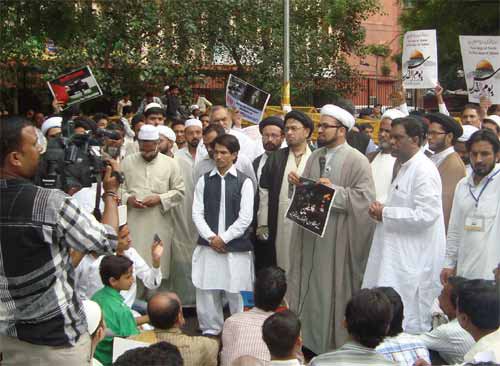 Another speaker was Maulana Mohsin Ali Taqvi, Imam of Shia Jama Masjid in Delhi. He said that creation of Israel was the product of a conspiracy by imperialist powers but it was a pity that Muslims were not united against it at that time or even now. He added that if Muslims become united against Israel, this country would be wiped out.

Jamiat Ulama-e Hind’s Maulana Javed Qasmi demanded that India should re-adopt Nehru-Gandhi policy of friendship with Arab countries. President of All India Muslim Majlise Mushawrat, Dr Zafarul-Islam Khan said that Muslims are very grateful to the visionary leadership of the late Ayatullah Imam Khomaini who gave the Umma a gift in the form of ‘Al Quds Day’ which reminds all of us that our ‘First Qibla’ is under occupation. He regretted that India which was at one time leader of non-aligned movement (NAM) became a puppet of a small country (Israel) “which is very unfortunate”. He referred to a recent cancellation of NAM meeting in Palestine due to the blatant disregard of the international norms by the Israeli government. As regards the situation in Assam, Dr Khan held both the central and Assam state governments responsible for the fresh cases of violence and killings. Dr Khan complained that no body is talking about the large quantity of sophisticated arms and ammunitions possessed by Bodos and  that Gogoi government also did not fulfil its promise of enabling Muslims to return to their homes safely by 15 August. Dr Khan exhorted the Muslims to desist from indulgence in self-grandiosity and lavishness and should leave behind the mind set of laziness. 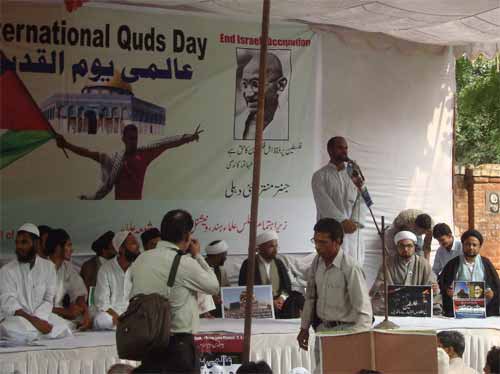 Dr Syed Qasim Rasool Ilyas, general secretary of the Welfare Party, lamented that because of India’s strategic relations with Israel, cases of terrorism are taking place in this country. Dr Tasleem Rahmani of Muslim Political Council said that all problems of Muslims of the whole world are linked with the problem of Palestine and if Israel and its supporters fail, not only the problem of Palestine will be solved but problems of Muslims all over the world will also be solved. He suggested economic boycott of Israel and its supporters. He urged people to desist from buying Israeli and American products like Pepsi and Coca Cola. As regards the news about atrocities let loose on Muslims in Burma, he cautioned that half of such news was false. Hence we should be sensible in this matter but in any case we should help our Muslim brethren there. The rally culminated at the Parliament Street and a memorandum of demands was submitted to the Prime Minister of India.