New Delhi: Muhammad Aamir Khan, the terror-accused innocent released after 14 yrs of detention in 17 fake terror-related cases, was honoured here on 20 September by Association for Protection of Civil Rights (APCR). During the function a cheque for Rs 5,00,000 (five lakh) was presented to him to help his rehabilitation. The function was chaired by the President of Jamaate Islami Hind Syed Jalaluddin Umari. 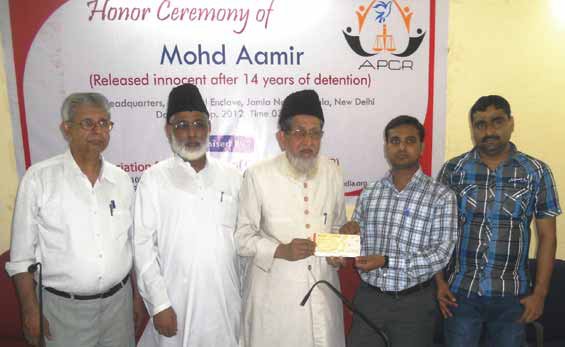 Muhammad Aamir, son of late Muhammad Hashim is a resident of Azad Market in Delhi’s Kishanganj area. He was arrested, rather kidnapped, by Delhi Police on 20 Feb 1998 from Azad Market and implicated in 17 cases of bomb blasts in Delhi, U.P. and Haryana. After 14 years of terrible detention, he was finally released on 9 January, 2012, as innocent. During this long period of struggle to prove his innocence from one case to another, he lost his father while his mother was struck by paralysis. After his release, he is trying to restart his life with a new enthusiasm.

With 2000 volunteers in ten states, APCR is trying to strengthen civil and human rights by creating a strong network of para-legal workers and holding awareness campaigns, protests, symposiums, seminars, fact-finding missions, legal and financial aid, legal help and guidance, filing public interest litigations etc throughout the country since its formation in 2006, said Akhlaq Ahmad, Coordinator of APCR. After its initial meeting with Muhammad Aamir, APCR had offered him some small financial help but it felt that he needed more help, hence this initiative, Akhlaq Ahmad said.

Advocate N.D. Pancholi, counsel for Muhammad Amir, said, “There are a large number of poor families whose bread-winners are in jail facing fabricated cases since a long time but nobody is supporting their families. It is need of the hour to support these families at all levels.”

Advocate Firoz Khan Ghazi narrated the whole story of the fight for justice to Muhammad Aamir through courts.

Addressing the gathering, Muhammad Aamir thanked APCR and Jamaat-e-Islami Hind for supporting him. He hoped that the community will help all those who are suffering with similar situations.