PFI holds rally at Jantar Mantar for release of innocents

New Delhi: Thousands of people joined hands together on 15 September demanding the release of under-trail innocent Adivasis, Dalits and Muslims on bail. It was the culmination of PFI’s "Bail is the rule, release innocents from jail" nation-wide campaign to demand the release of innocents, which was conducted  from 15 August to 15 September this year.  Human chains were organized in more than 100 centres across  the country. 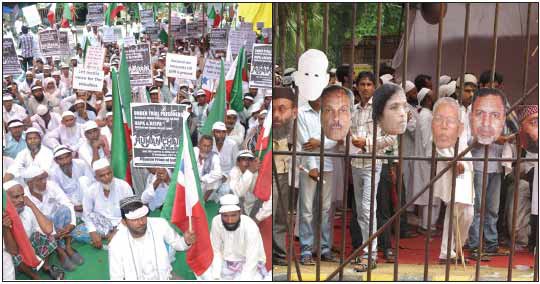 The participants took an oath which said, "We, the citizens of India, who have joined hands to form this Human Chain, declare our commitment to the democratic and secular values enshrined in the constitution of our country and protected by our legal system. We believe that every citizen should be treated innocent unless and until he is found guilty by due process of law. No accused individual should be kept in jail. We strongly believe that bail is the rule and jail is an exception. We call upon the government to release the under-trial prisoners of the country on bail.  We pledge to strive together to prevent illegal arrests, to free undertrial prisoners, to provide compensation to victims and to withdraw UAPA amendments and all black laws".

Some family members of victims such as Shozab Kazmi (son of Ahmed Kazmi), Shakeel Siddiqui (brother of Qateel Siddiqui) also participated in the human chain.

Following the meeting a nationwide signature campaign was inaugurated by Arundathi Roy demanding the release of innocents in jails.

While addressing the public, PFI chairman Abdur Rahman said, "according to the statistics, the number of undertrial prisoners is around three lakh. They are denied bail due to black laws such as UAPA and have been in prison for years without any proven crime." He announced that this human chain is not the end but the campaign will continue through various agitations in future.

Arundathi Roy said, "thousands of innocent Adivasis in many states of India are under arrest. They don’t have a piece of bread to eat. After the demolition of Babri Masjid, picking up of Muslim youth began on big scale. I demand that all these innocent political prisoners be released on bail immediately."