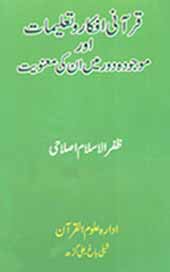 The first is a collection of select articles of the monthly journal Al-Islah on Qur’anic studies. The journal, edited by the distinguished mufassir Maulana Amin Ahsan Islahi, was published from Dairah Hamidiyah, Madrasatul Islah at Saraimir, Azamgarh. The volume contains articles of the well-known scholar of Qur’anic studies Maulana Hamiduddin Farahi, his close disciples and some other scholars of Qur’anics. The articles are related to the principles of translation of the Qur’an, coherence in the Qur'an (nazm), names of Surahs, Aqsam al-Qur'an, Huruf-I Muqatta’aat, nature of repetition in the Qur'an, etymological study of the word Aala’. The work also contains articles on taqwa (piety), khulus (sincerity of intention), desirable qualities of the believers and Qur'anic concept of najaat (salvation).