The Milli Gazette 26 May 2014
“the story of the prosecution crumbles down at every juncture...the minister [Modi] committed clear non-application of mind...in granting sanction,” since it was based neither on an informed decision nor on an independent analysis of facts...

The two-judge bench of the Supreme Court slammed the Gujarat Police for the incompetence with which it investigated the 2002 Akshardham terror attack case as it acquitted all the six accused including three who were sentenced to death by a lower court which was later approved by the Gujarat high court although the case was based on confessions given to police which all know are extracted through third degree torture. The bench was looking in the appeal of only five convicts as the sixth had opted not to appeal but the court ordered his acquittal as well as his case was based on the very same “evidence” used to implicate the other five. Being extra cautious lest Gujarat police use delaying tactics, ordered that all the acquitted persons be released that very evening. 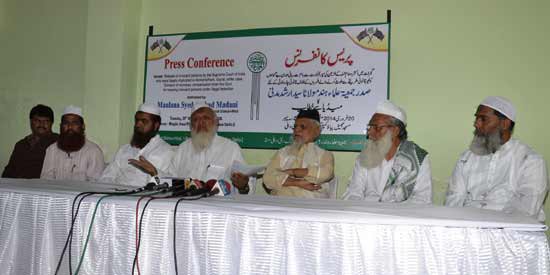 Read also:  “Even your Allah cannot help you; I am your Allah here” : press conference held at Delhi by Jamiat Ulama-e Hindi on 20 May

Acquitting all the six convicts, a bench of Justice A. K. Patnaik and Justice V. Gopala Gowda in their judgment said: “We intend to express our anguish about the incompetence with which the investigating agencies conducted the investigation of the case of such a grievous nature, involving the integrity and security of the nation…Instead of booking the real culprits responsible for taking so many precious lives, police caught innocent people and got imposed the grievous charges against them which resulted in their conviction and subsequent sentencing,” Justice Gowda said speaking for the bench which further observed, “the story of the prosecution crumbles down at every juncture”. The judges said in their verdict the minister [Modi] committed “clear non-application of mind…in granting sanction,” since it was based neither on an informed decision nor on an independent analysis of facts…”

Pulling up the Gujarat Police, the court said that “the courts below had ignored these basic legal principles while admitting the statement of witnesses while weighing the case against the accused persons” as it set aside the conviction and sentencing of six accused by the special court which had been upheld by the high court.

“We allow the appeals accordingly by setting aside the judgment and order of special court (POTA) in dated July 1, 2006 and the impugned common judgment and orders dated June 1, 2 2010 of the Gujarat High Court,” the court said acquitting all the convicts.

“On the basis of the issues, we have already answered the facts and evidence on record and on the basis of the legal principles laid down by this court, we are convinced that accused persons are innocent with respect to the charges leveled against them,” the court said.

The terror strike on Akshardam temple, which claimed 33 lives and left 85 injured, started in the afternoon of 24 September, 2002, and lasted till next morning.

Adambhai Sulemanbhai Ajmeri, Abdul Qaiyum Mufti, Mohmed Bhai and Chand Khan were sentenced to death in July 2006 by the special POTA (Prevention of Terrorism Act) court set up to try the terror case. While Mohammed Salim Shaikh was sentenced to life imprisonment (entire life), Abdulmiyan Qadri was given a 10-year term and Altaf Hussain was awarded five year imprisonment. At the time of release, four of them had spent eleven years in the Sabarmati Central Jail.