New Delhi:  An octogenarian well-known scholar was picked up by Delhi Police Special Cell on 21 January afternoon. Soon after the news of his arrest spread in the Jamia Nagar area of South Delhi, hundreds of protesting people took to the streets and gathered around outside the Jamia Nagar Police station. Shouting anti-police slogans, the protesters were demanding immediate release of the scholar. Local political leaders had led the protestors who demanded his release and an apology. As a result of this strong protest, Maulana was released the same evening. He later told MG that he was subjected to about 45 minutes of intense questioning during which he was asked about the source of funds for his madrasa and why he received so many foreign phone calls. 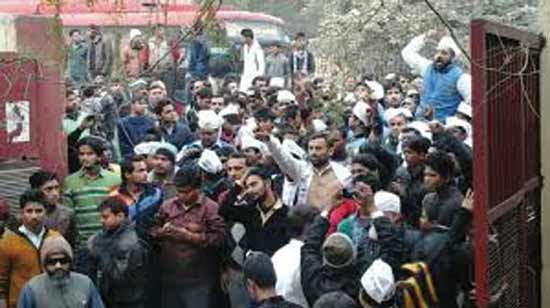 Renowned scholar and author of dozens of books, Maulana Yasin Akhtar Misbahi who runs Darul Kalam madrasa at Zakir Nagar, was picked up by IB from the Jamia Nagar police station at around 3.30 pm. Police had summoned him on the plea that they want him for an enquiry but when he reached the police station he was handed over to the Special Cell team which whisked him away to its Lodhi Road office. A number of his students had accompanied him to the police station but they were not allowed to go with him to the Special Cell office. They said that the Maulana was pushed into a car by IB and driven away while they were rudely prevented from accompanying him. When they tried to resist they were manhandled. Later, Salim, one of the protestors who had witnessed the episode at the police station, said, how could they have taken him that way; he is ill and unable to walk on his own.”
When MG tried to ascertain the facts from the police regarding the incident, the SHO said he has no information why he was taken and who took him. Officers present in the police station refused to comment on the issue.

However, sources told MG that Maulana was picked up in connection with a book that he had written years ago.

MG met Maulana soon after his release. He said, “I was taken by IB and questioned continuously by four IB officials for 45 minutes. They asked many questions. However, they stressed more on two things: One was about madrasa Darul Qalam, its students, objectives and the other question  they kept on asking was my connections with people outside the country. They kept on asking me why I was getting calls from outside? I politely told them that I am a scholar and I have written many books. I have an international audience, so people keep calling me and my conversations are purely scholarly.”

The sitting Congress MLA from the area, Asif Mohammad Khan while speaking to the media during the protest said, “Considering his scholarly reputation and age, it’s really a blemish on the face of the Indian democracy when such a senior citizen is whisked away in such an illegal way.”

Another political leader, Amanatullah Khan of the Aam Aadmi Party, who gheraoed the police station along with his followers, while coming down heavily against the police highhandedness, said, “why the police failed to follow the laid down procedure before picking up the Maulana. How can they dare commit such an undemocratic move? This is a very serious matter which shows police are deliberately marginalising the Muslim community”.

The arrest of the scholar drew sharp criticism from various Muslim organisations. While registering their protest and condemning the move, many Muslim organisations issued press statements against what they termed “the hegemony and prejudices of IB to deliberately marginalise and demonise the Indian Muslim community”. (Bilal Bhat)