Hyderabad (26 September 2015): Civil Liberties Monitoring Committee organized a press conference and expressed its deep concern over the delay of justice to the five under trial Muslim prisoners killed in "encounter" with the police near Alair in Nalgonda district of Telangana on 7 April 2015 by the escort policemen in cold blooded manner when they were handcuffed and chained to the seats on the way to court from jail to attend their trail.

Senior Advocate of Supreme Court Prashant Bhushan while addressing the press conference expressed his anger over the attitude of the government and judiciary. He said this case is not a case of encounter but cold blooded custodial killing and the delay in the justice of this case is due to three reasons, primarily the impunity of police force, secondly the irresponsibility of government and third is the insensitivity of the Judiciary.  He added that it is very shameful matter that six months have been passed without a proper hearing in this case, “Even the courts are hesitant to pass judicial magistrate inquiry order which is a mandatory provision of Cr.P.C,” he emphasized.

“Such a vast section of society is getting systematically targeted in the name of terrorism which has become an easy process for the state. A person spends a long period of his life in jails and just before the trial is going to be completed he is killed in encounter,” Adv Prashant said on the sorry state of affairs, “my blood boils when I witness all such atrocities.”

Immediately after this brutal killing the family members of the deceased and the Civil Liberties Committee demanded for justice to register case u/s 302 of IPC against the police personnel for opening the fire on helpless prisoners and also demanded for the Judicial Magistrate investigation u/s 176 (1) (A) of Cr.P.C. But, the gravity of impunity can be understood by the act of Chief Minister, K. Chandrasekhar Rao led TRS government who ignored the demands, instead the state itself registered an attempt to murder case against the prisoners who died in the police firing. Later, the government issued a G.O. to investigate the action of ‘terror operatives’ and handed over the so called investigation to an IPS officer who is already defamed of the subsequent police firing after the Makkah Masjid bomb blast in the year 2007. 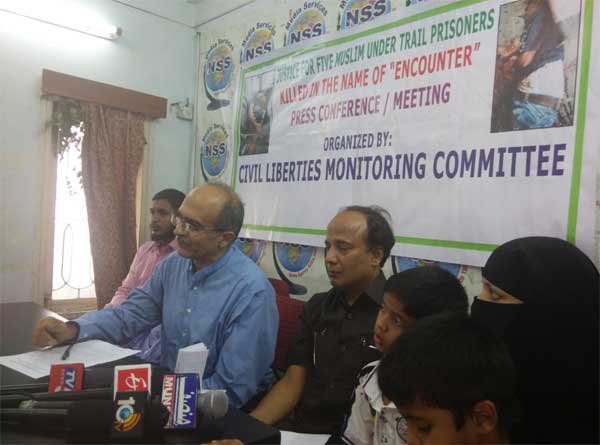 The family members of the victims and the Civil Liberties Committee also knocked the doors of the High Court in the hope that justice would be done. But, in this particular case the judiciary did not show any kind of hope of justice and took it as a non serious matter and did not provide any relief  to the family members of the deceased prisoners. High court rejected the appeal of re-postmortem and did not even provide family members earlier post mortem reports. The Chief Justice read the reports and returned back to the Addtl. Advocate General because he asked it to be returned back after reading. The Addtl. AG many times misguided the court and the court blindly believed him instead of hearing the other side version.

This ghastly encounter is a fit case for a mandatory Judicial Magistrate Enquiry as envisaged in sec 176 (1) (A) of CrPC for every custodial killing. Even for the implementation of the mandatory provision of the law victim families had to approach the court of law only to get let down by the state of affairs. The most disappointing aspect of the whole proceeding is the lack of court proceeding, the writ petitions concerning this encounter in the High Court is not even getting listed for hearing. Even after a special permission when the matter gets listed it will be posted in the last columns of the cause list so to never see the light of the day.

The double standard of the High Court can be clearly seen by comparing the Seshachalam encounter which occurred on same day as this encounter, where, in Seshachalam case, Court proceedings were conducted in uninterrupted manner and all possible relieves were provided including re-postmortem, 302 case investigation against the police personnel etc. this happened only due to the political support.

Mohammed Ahmed, father of Viqaruddin was very depressed on the attitude of judiciary towards this case. Addressing the press he said that, “From the day one I am repeatedly saying that whatever the judiciary decides the fate of my son I will accept it, but after police officers killed my son the way judiciary is proceeding in a insensitive manner not providing proper hearing in this case is making us feel betrayed. He further said, “The least which we expect from judiciary is that it should give a chance of hearing and fair trial, so that our confidence is restored.”

Ishrat Banu, wife of Dr. Haneef another victim of the ‘encounter’ said that, “I had waited for five long years for the trial to be completed and I was confident on the innocence of my husband and was sure that he is going to be acquitted. But, police killed my husband and left me alone to take care of our three minor children on my own. I still hope judiciary will do its job in fair manner and justice will be provided to my children.”

Question rises among the minds of civil society as to why this kind of double standard is shown in connection to this case, which is related to the Muslim under trial prisoners. There is a strong belief within the Muslim community that justice is not done to them as the prisoners were ‘Muslims’. It is a common and strong assumption that whenever a Muslim name comes, it is taken for granted that accused are terrorists and standard of justice would be different for them. This type of attitude which is developing in the judiciary is a greatest threat to the rule of law; it will breed alienation within minorities against the judicial system, which would be a tragedy for the society and the country at large.

Lateef Mohd Khan General Secretary of CLMC expressed concern over the influence of TRS Government in the role of police and judiciary. He believes that because of the unholy nexus of these three branches justice is being denied. The confidences of victim families are on courts, but judiciary is not fulfilling its responsibility but working towards a delay policy. “If the victim families hopes on judiciary is shaken, where will they go than?” he questioned.

He said the present KCR’s TRS government has given complete autocracy to the police department, who do not have any kind of accountability and such kind of persons whom are notorious in encounter killings are posted to the higher posts in the police department and administration.

Mr. Khan also added that the silence of the opposition political parties in this fight for justice is suspicious and the greater responsibility lies on the Muslim political party i.e. MIM which is mum on the issue of custodial killing of five Muslim under trial prisoners.

CLMC strongly believes that the killing of five under trial prisoners was a pre- planned act of anti-Muslim Hindutva group of police officers with pre-approval of Chief Minister K. Chandrasekhar Rao, which is why this committee held K. Chandrasekhar Rao responsible for the killings and demanded his resignation. Even after going through so much of anguish the family members of the victims still believe that they will get justice from the court of law and they will continue the struggle to get the justice for their dear ones. Therefore, we demand here, Judiciary must act immediately and ensure that justice is provided to the victims. The cases of encounter killings which are pending in the High Court should be listed as early as possible and heard on the priority basis as it is a matter of serious civil rights violation which challenges the very essence our Constitution stand for. At least now, High Court should order for mandatory Judicial enquiry u/s 176 (1) (A) of Cr. P.C. and a case u/s 302 should be booked against the policemen involved in the killing of those five Muslim under trail prisoners.