According to a report by the UK regulatory body, Charity Commission, during a Hindu history class for children and young people in an event organized by the Hindu Swayamsevak Sangh UK between 26 July 2014 and 3 August 2014 one speaker had made comments that were “wholly inappropriate and unacceptable at an event run by a charity”. 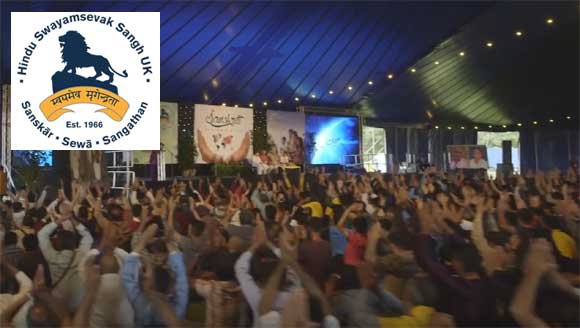 HSS’s failure to check the speaker, the Commission said, amounted to “mismanagement”. It has asked the HSS, “to take proactive steps to ensure that RSS has no control or influence over the charity and its affairs…”

The enquiry was set up on 17 Feb 2015, following a sting operation by  HardcashProductions and televised on ITV in which the speaker in question told young children, “To destroy Hindu history is the secret conspiracy of the Christians,” and, “If it comes to Islam, they are the world’s worst religion.”

However, the report further said, “There was insufficient evidence to demonstrate that the views expressed by the speaker were endemic or systematic in the charity and its activities.”

According to the report, Commission’s Official also spoke to the speaker in question who also regretted his comments.

A statement issued by the HSS has welcomed Commission’s report as, “In our view, the Charity Commission’s report makes clear that most of the allegations are unsubstantiated. The main findings of failings are based on an incident involving one speaker addressing some students using language that was deemed inappropriate.”

Established in 1966, HSS is the UK branch of RSS. Unlike the HSS US or HSS Australia there is nothing on HSS UK’s website that it is inspired by the ideology of RSS. In the 1990s Tariq Ali in his celebrated programme Bandung File produced a detailed documentary on Hindutva organizations, mainly the HSS. It’s not clear if it was after this program that the HSS decided not to declare its real ideology in the course of its activities.

HSS was registered as a charity in 1974, “to advance Hindu religion and to educate the public in the Hindu ideals and way of life”. It claims to have “grown into a national organisation with over 110 shakhas” across Britain.

Charity Commission requires organizations registering with it to comply with its strict conditions including adherence to the principles of equal opportunities, non-discriminatory practices on the basis of race, ethnicity, religion and sexuality etc.

The RSS boasts of having its overseas branches in 39 countries, including UK and even Middle East.

The speaker in question who made the objectionable remarks and tried to pollute young minds with religious hatred seems to be a local activist. In the past, despite protests from Muslim and human rights organisations, Hindutva organisations have been allowed to invite rabble rousers to UK such as SadhviRitambra, Uma Bharti and others.

This is not the first time that HSS has come under scrutiny. Even in 2001, the Commission had opened an inquiry “regarding the charity and expenditure of charitable funds to aid victims of an earthquake in Gujarat. That inquiry also considered issues around the relationship between factual charity and the RSS. The trustees at that time assured the Commission that there were no formal links between the two organisations and that there was only an ideological commonality; this was then not considered further during that inquiry.”

It should be noted that the HSS and another Hindutva organization, Sewa International (UK) were accused of transferring funds collected for Gujarat earthquake relief to Sewa Bharti in India. However, the then NDA Government refused visas to Charity Commission’s officials to travel to India and complete their investigations because of which Charity Commission had to leave its investigations incomplete that was interpreted by Hindutva groups as having been absolved of all the charges of misconduct.