London: Casualities in the terrorist attack near Finsbury Park Mosque could have been far higher and far more serious had the attacker not confused the spot, few yards away from the mosque, where Muslims were attending a Pakistani elderly man who had collapsed there, probably due to heart attack and was being helped by others, an eyewitness has told this scribe. The elderly man was declared dead when the ambulance arrived.

“We saw a disabled Pakistani man collapsing on the pavement and ran to help him. As we were calling the ambulance and my cousin had put his hand underneath the man’s head, the van came out of nowhere and ran over us. I was thrown away, my cousin and an Algerian brother were run over by the van.” Waleed Salim, in his thirties, said.


Waleed Salim with his daughter

Salim has received injuries in his legs and shoulder and is having to use crutches. His cousin and the Algerian man suffered serious injuries are being treated for multiple fractures in ICU. Altogether 10 men got injured in the attack.

“Even after being apprehended and after being handed over to the police he kept yelling that he was happy to do what he did and will do it again. You can see him in video clips circulating on social media tauntingly waiving at the crowd.” Salim said.

According to reports the terrorist first stopped at a crossing on the main Seven Sisters Road and asked a white lady the location of the mosque telling her that he had a delivery for the mosque.

The attacker has been identified as Darren Osborne, 47-year old from Cardiff  a married father of four.

The Imam of Muslim Welfare House Mosque, Mohammed Mahmoud, one of the most popular reciters of the Holy Qur’an in London, who is also leading daily Taraveeh Prayers at the mosque, played a crucial role in protecting the attacker from being hurt by the mob. He immediately came out of the mosque, entered the angry mob and stopped them from beating the attacker by reminding them that this is the month of Ramadan in which Muslims are enjoined to contain their anger and be calm.

London Mayor Sadiq Khan penned a special piece on the tragedy paying tributes in the Guardian headlined The Finsbury Park imam’s heroism shows where London can find its strength.

Celebrated British writer J.K. Rowling tweeted, “The extraordinary decency and courage of this act has brought me to tears this morning. I hope this imam gets the recognition he deserves.”

The extraordinary decency and courage of this act has brought me to tears this morning. I hope this imam gets the recognition he deserves. https://t.co/SR5u6RRHG9

Daily life in Finsbury Park, one of the most cosmopolitan areas in London, has returned to normal. However, last night one could see the absence of daily hassle and bustle normally seen there.

The attack has been widely condemned by all sections of the society. However, there is a wide resentment in the public against media for targeting particular communities.

Last night as I came out of the Finsbury Park Mosque I saw a BBC reporter being shouted at by a young  African woman when he was reporting on camera. “It’s you guys who create hatred. You demonise black and other communities.” She said.

Some took to social media to express their anger against the media.

We need address the reasons why the #FinsburyPark terrorist was radicalised. pic.twitter.com/oLaHKYeSkB

Again: let's talk about how the #FinsburyPark terrorist was radicalised. pic.twitter.com/t3O6q5zfXq

Mainstream media when they found out the #FinsburyPark terrorist was a white man. pic.twitter.com/4l1YXgy8pG

And how was this terrorist radicalized? Should these mainstream hate preachers be brought to account?#FinsburyParkpic.twitter.com/VZSPGQVpLy

Dear every Muslim living in the UK, I'm so sorry that our disgusting media is doing everything to put your safety at risk. #FinsburyParkpic.twitter.com/aO6gXPHZj1

When the ss British tabloid Sun asked a twitter for permission to use his video clip, this is how he responded. 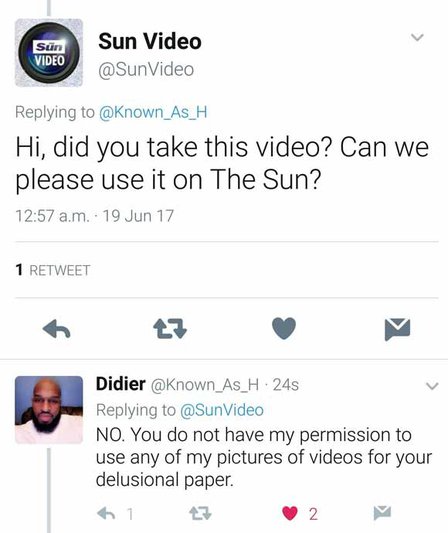 British Prime Minister Theresa May has paid a visit to Finsbury Park Mosque where she promised extra security to the mosques. “This morning we have seen a sickening attempt to destroy those freedoms, and to break those bonds of citizenship that define our United Kingdom,” she said.

“It is a reminder that terrorism, extremism and hatred take many forms, and our determination to tackle them must be the same whosoever is responsible.

“As I said here two weeks ago, there has been far too much tolerance of extremism in our country over many years – and that means extremism of any kind, including Islamophobia.

“That is why this government will act to stamp out extremist and hateful ideology – both across society and on the internet, so it is denied a safe space to grow.”

He made sure that he visited the Mosque as well. Frequent visits to community centres and places of worship and keeping in touch with his constituents is not unusual for him though.

Immediately after the attack he tweeted:

I am shocked by this horrific and cruel attack in Finsbury Park, which is being treated as an act of terror. pic.twitter.com/fipwZJ1eBZ

Community vigils have been organised in the area attended by representatives of Jewish, Christian, Muslim and other communities.

Incredible moment as hundreds of Londoners brought in solidarity with worshippers at Finsbury Park Mosque inc@SadiqKhan#WeStandTogetherpic.twitter.com/X1aFqF5Jxp

Islamophobic hatred in UK has reportedly surged after the Manchester and London Bridge attacks.