Pune: Sadia Anwar Shaikh, 18-year-old Pune girl was arrested by Kashmir Police on 26 January claiming that she was planning to explode herself during the Republic Day parade in Kashmir. I visited her home in Pune today to ascertain the facts. I found ATS people camping around her house in large numbers. I could first meet her maternal grandmother and later met her mother also who told me that Sadia had gone to Kashmir seeking admission in BSc Nursing in a college there. Her course was going to start on 15 February. 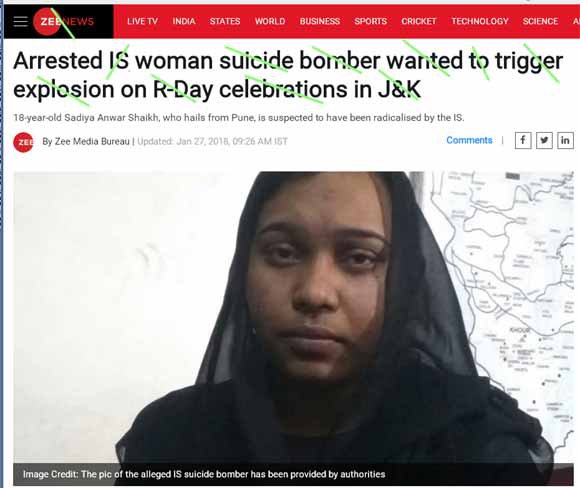 Her mother said that Sadia is a religious girl who is punctual with her prayers and used to talk to her grandfather about religious matters. Sadia’s father had died while she was still a young child and since then she lived with her maternal grandfather. She was a good student and always secured good results in her exams. Having attended a convent school, Sadia is good at English.

Her mother said that local media people are pestering the family since Sadia was arrested in Kashmir and this has made the family’s life difficult. ATS people too are camping outside her home in large numbers. They tell the family why you observe purdah and why you offer namaz.

The mother said, if I go out to the market, ATS people follow me continuously. She said, IB had given an input to Kashmir Police that a girl from Pune has come to Kashmir to take part in a suicide attack. Thereafter, Munir Khan, IGP of Kashmir, issued a red alert and finally Kashmir Police arrested Sadia at 11 am on 26 January.

Sadia’s mother said that Kashmir Police has investigated the matter thoroughly and has given clean chit to Sadia saying that she is not involved in any terrorist or extremist activity and that there is no truth in her relationship with ISIS or Al-Baghdadi.

Sadia’s mother said that Kashmir Police has contacted her over phone saying that she can come to Kashmir and take her daughter back to Pune. Sadia’s mother is sore with the print and electronic media which did  not bother to check the facts and instantly started a smear campaign against the innocent girl.

Sadia’s mother left for Kashmir tonight, 27 January. She expressed her apprehension that once back in Pune, Maharshtra Police may arrest or harass Sadia.