That Abdul Subhan Qureshi, infamous as “India’s bin Laden”, has been nabbed at long last is a relief. The arrest wraps up longstanding investigations into terror attacks, ranging from Hyderabad, Surat and Ahmedabad. Dubbed ‘Techie’, he is said to have specialized in making bombs reportedly difficult to defuse. He is also an associate of the alleged “Indian Mujahedeen” founder, Safdar Nagori, who has been in jail for long now. It was a timely catch in the run up to Republic Day. Now there only the Bhatkal brothers holding out, who like the D Company are believed to be out of the country.

There is little else left to settle on the terror front. This casting of the terror case dating to the last decade into the ash heap of history adds to the earlier letting off of Vanzara and Co. in the Gujarat encounter cases and of Sadhvi Praya Thakur et. al. in the Malegaon 2008 case. The army man involved in the latter, Lt. Col. Purohit, has donned olive greens again. The current day juncture, to explicate, is that, like most of India now proclaimed open-defecation-free, India is terrorism free.

The official narrative has it that over the preceding decade some Indian Muslims precipitated a terror assault on India, supported by Pakistan’s notorious ISI expanding its footprint across India from a quiescent Kashmir. The ostensible trigger was the alienation resulting from events like the Babri demolition and Gujarat pogrom. They also had jihadist connections, stemming from rise of Islamism in wake of 9/11. These links included the Taliban, Al-Qaeda and, over time, the ISIS. India’s redoubtable anti-terror agencies and mechanisms put together to cope with the threat have finally delivered. India, under Modi, has not witnessed terror attacks, with many aspirants for the ISIS being tackled through counseling and parental pressure. The narrative now is that under the able stewardship of intelligence honcho, Ajit Doval, as expected, our intelligence and policing organizations merit an appreciative mention at Republic Day.

There is of course a ‘dissident’ narrative. It is perhaps muted since saying it out loud in today’s day and age amounts to ‘sedition’. But it needs being aired. The official narrative would likely figure as a box ticked in Modi’s last lap into elections, with the date either pulled into this year to avoid the incumbency backlash or next year in due course. It needs querying timely, if not busting outright so as to broaden the citizen’s political choice at election time. So, here’s the ‘dissident’ narrative.

The four puisne judges at the Supreme Court have done the nation a favour by putting the cat among the ruling party’s pigeons. Their going to the citizen’s court has forced a focus on the troubling case of the death of CBI judge, BH Loya. Justice Loya supposedly died of heart attack brought on by his overseeing a significant case involving the ruling party’s president, who allegedly was linked to the killing in an ‘encounter’ of Sohrabuddin and his wife, Kausarbi, and later, their accomplice, Prajapati, by the now scot-free top cop Vanzara and his crack anti-terrorist team. Sohrabuddin was claimed to be en route to take out Gujarat’s chief minister to avenge the Gujarat massacre. The top judges apprehending a cover up and intervening dramatically to preserve the wheels of justice from political chicanery have put a spoke in the official narrative. Clearly, there is more to the terror India has witnessed.

Vanzara and Co. also figured in the fake encounter that felled teenage Ishrat Jahan and three others. They too were supposedly on the errand as Sohrabuddin. Alongside the targeting of the provincial supremo, Narendra Modi, Gujarat was also at the crosshairs of terror attacks such as at Akshardham and multiple terror bombings in Ahmedabad. Surat was also targeted, but – conveniently - the bombs were “discovered” by sharp-eyed right-wing members and defused timely.

Much of the evidence pointing to Muslim provenance of the bombings was from the Gujarat and Madhya Pradesh police, both under control of right-wing political masters. The evidence regards some bombings, such as in Varanasi, was from give-away emails, with Muslim finger-prints all over them such as from the “Al Arabi” group (mistakenly named after a Sufi saint rather than an orthodox personage).

Implausibly, the targeting of Muslims and Muslim places of worship too has been laid at Muslims’ door; for instance, in Hyderabad and Malegaon. This over-enthusiastic implication of Muslims, combined with the whitewashing of ‘saffron terror’, gives rise to the suspicion that there were Muslim impersonators at work and whose footprints need now to be obscured. The pulling out of members of the Abhinav Bharat and Sanatan Sanstha from the list of suspects shows up that the cases of the mid- and late 2000s are being put to rest.

The provenance of the terror then is in the veering of politics rightwards about then. Lal Krishna Advani, hoping to ride on the Shining India campaign into 7 Race Course Road, was tripped up by the over-zealous campaign itself. Hindutva needed a new champion. Mr. Modi’s aura had to be built up and the Hindu vote bank manufactured alongside with the Othering of Muslims.

Ostensibly minority-perpetrated terror was instrumental in this, with 2008 being the highwater mark intended as setting the stage for the elections in 2009. In the event, the UPA went in for another term, even though their showing in the 26/11 crisis was pilloried.

The right wing discourse over the next five years was that India needed a ‘strongman’, with Mr. Modi’s name willy nilly emerging as the Iron Man II, displacing his mentor and original claimant to the title, Advani. Now that Mr. Modi has made it to Lutyens, there is a need to let off the right-wing foot soldiers who paved the way and nab the Muslim terrorists hold outs, such as Qureshi, to pin the blame.

By all means Muslims participating in or inclined towards terror must have their just desserts served up. The nabbing of Abdul Subhan Qureshi is to be appreciated subject to the final judicial verdict. It is one stick less for beating the Muslim community with. But in keeping with the rule of law, terror suspects cannot be rounded up one-sidedly. Their Hindu counter-parts, with whom they kept up a terror jugalbandi of sorts through the 2000s (targeting of each other’s religious sites, for instance), need to be arraigned. A back of the envelope attribution of terror incidents dating to the period is below, with saffron terror and terror of Muslim provenance identified with the two colours popularly associated with each: 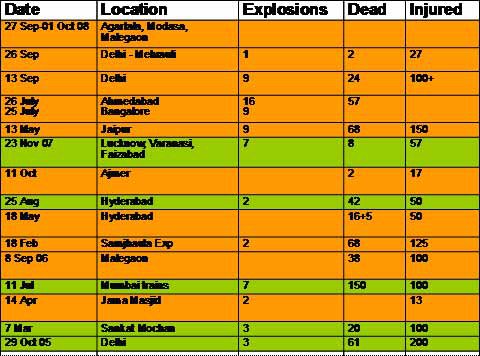 In case this is not done, two possibilities arise. One is that the Hindu perpetrators of terror crimes had political provenance, and having proved useful to their political masters, need to be rewarded. The second is that there is no link between the two – the political masters and Hindu terror entrepreneurs – in which case, their nevertheless being left off is tacit acknowledgement that right-wing forces gained politically in their polarisation game ending up with the electoral capture of Parliament. This puts the democratic credentials of the electoral exercise in question, in that its marginalization of Muslims was brought about inter-alia by illegitimate means.

Finally, there is a foreign policy underside. The NIA appears to have gone the CBI way as a caged parrot. Rule of law is sine qua non of a robust democracy. Else, India would replicate Pakistan that uses tender gloves in handling Hafeez Saeed. If India is to credibly accuse Pakistan as a fount of terror, it had better not live in a glass house of its own. It is no wonder India’s case for a comprehensive convention against international terrorism has not acquired traction yet.

There is an election coming up. In case the rule of law noose tightens round Mr. Amit Shah in the Loya case, reopening up the Sohrabuddin case – and other Gujarat cases under his watch and that of patron, Mr. Modi – there would be a hark back to the tried and tested Terror Narrative.

More is needed to be done to flesh out the – dissident - counter narrative, outlined here. All that is being asked is to take justice in terror cases to their logical end. Let the electorate decide. If law enforcement falls short, democracy will be the casualty.

Ali Ahmed’s latest self-published book is India: A Strategic Alternative(CinnamonTeal 2018). He may be contacted at aliahd66(at)gmail.com