On 22 January 2011, Zakat Foundation of India organized in New Delhi, the first of its series of 12 National workshops on “Economic Empowerment of the Deprived through Timely Information and its Utilization”. The twin objectives of the workshop are (a) to create awareness amongst the participants about umpteen schemes launched by the Government for the welfare of minority communities of India and (a) imparting training on how to make the best use of Right to Information Act in order to monitor the implementation of these schemes. Participants from the National Capital Region and adjoining areas registered on the website of the Foundation www.zakatindia.org and attended the Delhi workshop in good numbers making it a successful event.

The workshop began with the inaugural power-point presentation by the Dr Syed Zafar Mahmood, President, ZFI. He enlightened the participants on the issues faced by the minority communities of India in recent times. He discussed in detail the ZFI’s RTI-action-driven discovery of the non-implementation of the PM’s New 15-Point Programme for the Welfare of Minorities and the Sachar Report, both of 2006, including the non-establishment of the promised Equal Opportunity Commission and failure to create a mechanism to award incentives for those who choose to care for Diversity Index. He drew the participants’ attention to the Sachar Committee’s lamentation that electoral constituencies with high Muslim and low Scheduled Castes (SCs) population have been reserved for the SCs. On the other hand, there is another set of constituencies with high SC and low Muslim population which have not been so reserved for SCs. Sachar Committee strongly recommended the rectification of this gross anomaly against Muslim interests.

Dr Mahmood also told the participants that another vital Sachar recommendation, that – in order to make up for the Muslim losses over the decades gone by, the Government should nominate Muslims wherever it has discretion to do so – has not so far received any attention from the Government. He added that UGC’s lackadaisical attitude toward administering Maulana Azad National Fellowships leaves much to be desired. Likewise, Indian Wakf Service has not been created. Government employees have not yet been sensitized, etc. He urged the participants to be proactive and extensively use the RTI Act to bring the minority communities out of the morass they are in.

Noted social activist from Maharashtra, Mr Nisar Ahmad Tamboli, explained to the audience at length various kinds of schemes, facilities, circulars, orders, decisions, acts, policies, funds, memorandums, institutions, courses, syllabi, scholarships, application forms, methodologies, statistics, websites, etc available for the minorities at the central and state levels. He told the participants about his website www.mwodhule.com where he maintains these details. ZFI’s Liaison Officer, Mr Tariq Qamar, made a presentation on the ground level details of major government schemes being run for the welfare of minorities as well as the RTI fee structure, time limitations for compliance by the government, prescribed appeals and penalties.

Another well-known activist from Kashmir, Dr Muzaffar Bhat, shared his experiences and success stories under the Right to Information Act. He encouraged the participants to make use of this powerful tool. 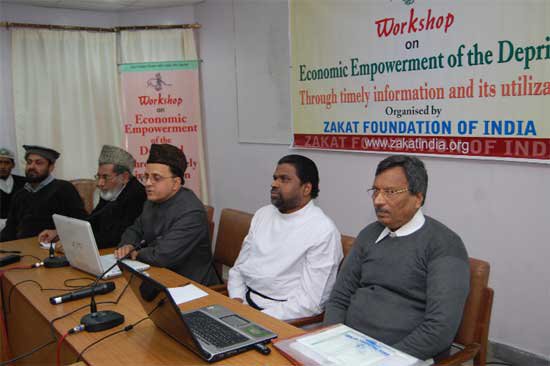 The workshop concluded with an extensive interactive session during which the participants made queries about the welfare schemes and the RTI Act. It was concluded with the President’s rap up. He asked the participants to spread the word further and to keep ZFI informed of their activities to help the needy and their monitoring of the governments schemes’ implementation at different levels. He advised extensive use of the National Portal of India and the Redressal of Grievances website. The activists should keep a deep and regular eye on daily newspapers and Employment News, websites of Maulana Azad Education Foundation, National Minorities Development & Finance Corporation, Ministries of Minority Affairs, HRD, Social Justice & Empowerment, Personnel, Home, Youth, Culture and the ilk. Copies of ZFI’s compendium of government’s welfare schemes and a Guide to RTI Act were distributed among the participants.

Similar workshops have been planned to be organized by Zakat Foundation of India in Lucknow, Rampur, Patna, Ranchi, Kolkata, Murshidabad, Mumbai, Barpeta, Bhopal, Manipur, Arunachal Pradesh and Kashmir during January, February and March 2011. Registration is going on online www.zakatindia.org. where other details are available.