New Delhi: The Sangh had disowned Sunil Joshi. So are doing many of its cadre. But there is one tribe of the most trusted ones which refuses to part company from their well-wisher Indresh Kumar. Yes, the Rashtriya Muslim Manch (RMM) is least worried about what Lt. Col. Purohit says about the Sangh ideologue. This band of sincere foot soldiers goes on chanting his praise.

In a press conference, they drew attention to the ‘fact’ that “Mr. Indresh Kumar is a committed nationalist….who has been working ceaselessly for the uplift of Muslims.” If “bomb blasts” means uplift - yes, Muslims go straight up to Heaven; then of course, Indresh deserves all praise for finding such readymade transport of Muslims to Heaven (that too free of cost!). 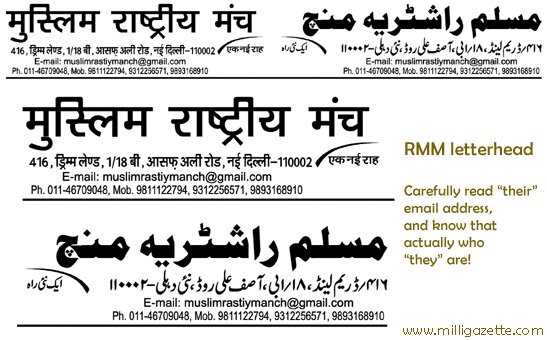 All self-proclaimed members of the RMM are closely connected to the BJP’s Minority Morcha. Tanweer Ahmad owes his position to Kumar. It is, however, interesting that while persons like Arun Jaitely and others were conspicuous by their absence during a book release programme in which Nitin Gadkari pledged his party’s full support to Indresh Kumar; RMM declared themselves as “Nationalist Muslims” and added that Mr. Kumar was their “guiding spirit.”

It is worthwhile to recall here that there has been persistent demand among Muslims to boycott all those who have been publicly or in camera parleying with Indresh Kumar for reaching a “peaceful” accord on the Babri Masjid. After the exposure, the intellectuals have gone underground and do not dare to stand shoulder to shoulder with him. However, this faithful tribe is an exception. One wonders when will they deviate to sense! One wonders whether there will be anyone to lead their funeral prayer when they die! They didn’t stop at expressing their solidarity with Kumar, they also placed a chadar at the shrine of Khwaja Moinuddin Chishti to seek the sufi saint’s favour for Indresh’s release. What an irony! RMM is now regularly sending out statements to the Urdu press in support of RSS and Indresh Kumar. It will also start a countrywide yatra called Safar-e Sadaqat (Journey of truth) from 23 January to cover 158 districts across 25 states, as stated in its press release on 19 January.