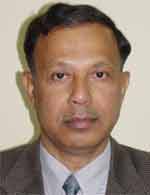 , Chairman, Department of Plant Protection, and former Dean, Faculty of Agricultural Sciences has been conferred with the "Dr. B. Vasantharaj David Award- 2008" for outstanding contribution made in the field of Plant Protection during the National Conference on Biodiversity, Conservation and Management of Bioresources held at Department of Zoology, Andhra University, Visakhapatnam organized by Applied Zoologists Research Association (AZRA) Division of Entomology, Central Rice Research Institute, Cuttack.                 The American Federation of Muslims of Indian Origin (AFMI) has  announced the recipients of its Sir Syed and Meer Taqi Meer Awards for the year 2009. The Sir Syed Award 2009 for contributions to the education of Indian Muslims goes to Mumbai-based educationist Mubarak Kapdi. He is founding president of the National Movement for Education and chairman of the Maharashtra Urdu High School. He is well known for his counseling sessions, workshops, motivational speeches, articles, books, and other educational activities across India. Thousands of students have benefited from his counsel and went on to successful careers. His call for 'total education' has been well received across the country. The Meer Taqi Meer Award 2009 for contributions to Urdu literature goes to noted poet and littérateur Pt. Anand Mohan Zutshi 'Gulzar' Dehlvi. He is widely hailed as the reigning king of the Delhi school of Urdu poetry and an embodiment of the composite “Ganga-Jamuni” culture of India. In his 83 years, he has served Urdu in a number of ways through his writings, poetry, teaching and associational activity. He is the founding secretary and Chairman of Anjuman Tameer-e-Urdu Dehli (founded 1947). He started writing poetry in 1933 and took part in the Indian freedom movement from 1936. He was awarded Padma Shri, Ghalib Award, Iqbal Award, Maikash Award, Mushafi Award, and Akhtar Sheerani Award, etc. He also holds the distinction of bringing out independent India's first Science journal in Urdu through CSIR. Both awards carry a citation, a crystal plaque, and thirty thousand rupees. The awards will be presented in the main session of AFMI's XVIII Annual Convention and Gala Award ceremony on 2 January, 2010 at Rabindranath Tagore Hall in Indore, Madhya Pradesh.   NAZEER FATEHPURI, famous poet, writer and editor of an Urdu magazine of Pune who was awarded an honorary Doctorate Degree by an educational institute of America in recognition of his long creative, critical, research and journalistic services, was honoured by the people of his own native place, Fatehpur Shekhawati in Rajasthan with All India Allama Kali Das Gupta 'Raza' Literary Award consisting of a shawl, memento and a cash prize of Rs 21,000 sponsored by Bazm-e Adab, Fatehpur.   Dr M.Q. SALEEM, a noted man of letters, critic, journalist, columnist and editor of an Urdu magazine was honoured for his twelfth book Hemaqatein hamari (our follies) by Urdu Academy of Andhra Pradesh. This is a book of humour and sarcasm. He is an author of 13 books and has been honoured with many awards by different literary organisations including Urdu Academy of West Bengal. He had achieved distinctive marks in Urdu, linguistics, Arabic, Persian, Hindi, history, B. Ed, LLB, M. Phil, Ph D and Urdu Pundit. He is a teacher by profession and has also been honoured with 'Best Teacher Award' by AP's Education Department.   Dr ATIF BAREILVI, a poet of world fame has been honoured with Aftab-e Ghazal Award by Berlin's Ajnuman Farogh-e Urdu in recognition of his literary services. With this, he has become the first Indian poet to be honoured by a German literary organisation. The Award was given to him by Anjuman's chairman Sarwar Ghazali, who is a judge of Berlin's High Court. Before this Award, he was also honoured with many literary awards by foreign countries like America, Lebanon, China, Kuwait etc.   Prof LALIT MOHAN BARYAR, a famous plastic surgeon in AMU's J.N. Medical College has been appointed President of the College's Plastic Surgery Department by VC, Prof P.K. Abdul Azis for a period of 3 years. Prof Baryar is also the President of UP Chapter of Association of Plastic Surgeons of India and has played an important role in getting recognition of MCH (Plastic & Reconstructive Surgery) Degree of the University. His more than 50 research articles have been published in national and international journals.   Prof. AMK SHAHARYAR, a prominent Urdu poet and former Head of AMU's Department of Urdu, has been honoured with Sambalpur University (Orissa)'s highest award, 'Gangadhar Rashtriya Kavita Award' which consists of a cash prize of Rs 50000, a memento and Shawl. An announcement to this effect was made in a press statement. He is the 18th poet of this country to win this literary award. Among Urdu poets, Ali Sardar Ja'fari was honoured with this Award earlier. Shaharyar's 6 anthologies have been translated into English, Spanish, German, French and Italian languages in addition to Oriya and many other Indian languages.