Public perception plays very important role in the collective behaviour of society. Important tools for influencing public perception may be quite a few but the most effective among them is ‘Media’. Somehow people in general perceive that consumption of meat is due to Muslim community and they compulsorily are non-vegetarian. 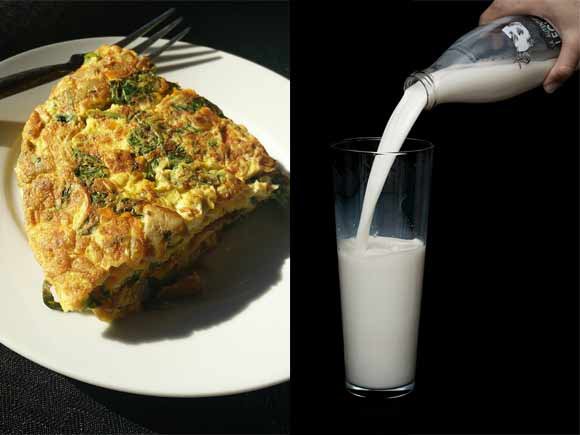 By the way, what is veg or non-veg depends on the prevalent perception. For example, Railways waiters, taking orders for dinner/BF/lunch, invariably ask for veg or non-veg and interestingly, they bracket omelette into non-veg category. Query regarding milk being veg or non-veg baffles them. Why egg, an animal produce, is non-veg while milk, again an animal product, is non-veg? People consuming milk have just to witness the way milch cattles are made to suffer for squeezing out the last milk drops, which rightfully belonged to their progeny.

Ms Maneka Gandhi in her column on firstpost.com writes, “Cows give milk if they are well fed, watered and exercised. Since all three inputs do not exist, their bodies have to struggle hard to produce milk. In order to get the milk, dairy owners inject them with an illegal drug called ‘oxytocin’ twice a day. Oxytocin sends the animal into labour, so for two hours a day the animal is writhing in labour pains till the milk is squeezed out of her inflamed diseased teats. Oxytocin comes into the milk and results in hormonal imbalances in humans who get diseases like tuberculosis, cancer, blindness in children etc. In fact, the single main disease-giving drug in India is oxytocin which is being smuggled into India from China by a mafia that is headquartered in Kolkata and Mumbai.” (http://www.firstpost.com/living/the-maneka-gandhi-column-cows-are-injected-with-illegal-drugs-for-milk-condition-of-indian-dairies-appalling-2699844.html)

It is generally believed that non-Muslims, in particular upper caste/OBC Hindus, revere cows to the extent of calling it their mother but why then we are witness to stray cows munching on harmful plastics on our roads in addition to being traffic hazards? It is also a fact that even some well-to-do families let their cows roam on streets/markets to satisfy their pangs of hunger while not hesitating a bit in milking them dry in the evening when these docile and gentle animals faithfully return to their abode. Do Muslims domesticate cows? The general belief is in the negative. However, Mr. Muhammd Atiq, taking care of over 200 cows in his ‘Gaushala’ in Jodhpur, is one such case breaking the myth (http://www.thehindu.com/news/national/other-states/A-home-for-deserted-bovines-in-desert-State/article16248641.ece).

Now coming to meat consumption, a majority of Muslims occasionally eat meat and that too in small quantities while many non-Muslims prefer meat preparations in social gatherings, while taking liquor as well as during travels. Evidence for this trend can simply be had from the fact that annual increment in mutton price occurs, particularly In North India, during the ‘Holi’ festival. Mutton vendors are condescending to their non-Muslim customers and take special care of their needs while sometimes even ignoring their regular Muslim customers. Their attitude is, of course, business-driven. Generally, food habits are economic or/and location-dependent. While coastal regions are non-veg (mainly sea food), land-locked regions like Rajasthan are veg inclined. Further, economically weaker sections like Dalits and Muslims fulfill their nutritional requirements through buffalo meat which is a rich source of protein available cheaply.

To brand all Muslims as compulsive non-vegetarian is, therefore, a concocted myth. As a matter of fact, our beloved Prophet Muhammad (pbuh) mainly survived on dates and olives while occasionally relishing delicacies like ‘lamb curry’. I have come across Muslims who are strictly vegetarian. There is nothing in Islam which mandates meat consumption. Therefore, in following the tradition of our beloved Prophet (pbuh), a Muslim may remain a devout Muslim by being vegetarian.

Another popular weapon to confront Muslims is the term ‘appeasement’. In the light of the Sachar and Misra reports, we have been substantially educated to relegate this term as mere propaganda by groups having vested interests.  Still for the sake of argument let’s discuss ‘Haj subsidy’. First, only economically well off Muslims are obligated to perform ‘Haj’ once in their life time and that too after taking care of their familial obligations back home and therefore, they must spend from their own pockets without asking anyone for loan/donation etc. Earlier, ferrying Haj pilgrims was restricted to only one air carrier, i.e., government-owned Air India. Anyone having little business acumen can explain airlines volunteering to reduce fare in view of such a huge business opportunity. Why tenders were not floated in order to pick an airline keeping in mind facilities provided at an economical rate? In the past the government’s obsession with Air India was just to bail out a crisis-ridden public sector enterprise. Muslim leadership/intellectuals plea with government to do away with this deceptive subsidy has fallen on deaf ears because it is in fact a subsidy to Air India.

One more so-called appeasement policy is declaring holidays in name of religious personalities. Do Muslims really demand such lollipops? With due reservation over the present U.P. government’s policies, at least one should congratulate it for doing away with superfluous holidays, thus increasing much needed working days. One expects that further holidays will be scrapped in future.

In conclusion, one hopes that the Indian government will do the following: