Sixty nine years after Father of the Nation Mahatma Gandhi was assassinated, a “shrine” dedicated to his killer Nathuram Godse was set up in Guwalior by the Hindu Mahasabha on Wednesday (Nov 15), Hindustan Times reported. 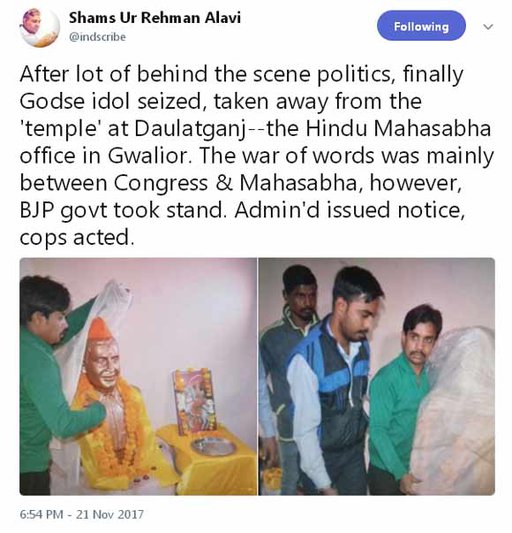 The ultra right wing organization installed a bust of Godse inside its office premises amid Vedic chants to mark the anniversary of his execution.

Leaders of the Mahasabha said every Tuesday they will perform “akhand bharat (Greater India) aarti in the temple” to apprise the younger generation about Godse’s life and vision.

The termakhand bharat or Greater India is most commonly used to encompass the historical and geographic extent of all political entities of the Indian subcontinent, and the regions which are culturally linked to India or received significant Indian cultural influence.

A Gwalior-based leader of the Mahasabha Jaiveer Bhardwaj told HT that they were forced to set up the shrine inside their office building as the district administration did not give permission and land for the temple.

“We had applied for permission on November 9, but district authorities denied it. So we finally decided to set up the temple inside our building in the Daulatganj area of the city”, he said.

Bhardwaj said the “temple” would created awareness among the younger generation about the historical events surrounding the life of Godse, which, he claimed, is often distorted, and the role of Mahatma Gandhi in the partition of the sub-continent in 1947 by Britain to establish Pakistan.

He said Godse had spent time in Gwalior and it was from here he went to Delhi to kill Mahatma Gandhi.

Along with them, police arrested Vinayak Damodar Savarkar, who was suspected of being the mastermind behind the plot.

Savarkar coined the term Hindutva (Hinduness) to create a collective "Hindu" identity as an essence of Bharat (India).

While the trial resulted in convictions and judgments against the others, Savarkar was released on a technicality, even though there was evidence that the plotters met Savarkar only days before carrying out the murder and had received the blessings of Savarkar.

The Kapur Commission in 1967 established that Savarkar was in close contact with the plotters for many months.

In 2015 vice president of All India Hindu Mahasabha, Sadhvi Deva Thakur stoked a controversy saying Muslims and Christians must undergo sterilization to restrict their growing population which was posing a threat to Hindus.

Nathuram Godse temple is apparently a part of Indian ultra right political parties’ agenda to make Indian a Hindu State. It may be recalled that in June last, approximately 150 Hindu outfits held a four-day convention in Goa to chalk out a program for establishing a ‘Hindu Rashtra’ in India by 2023.

The convention was organized by the Hindu Janajagruti Samiti (HJS), the sister outfit of Sanatan Sanstha which was caught up in controversy after the murder of rationalist Dr Narendra Dabholkar in 2013.

Declare India a Hindu rashtra, ban cattle slaughter and declare the cow India’s national animal, ban all religious conversions, start the construction of a grand Ram temple in Ayodhya: these were some of the resolutions passed by the four day convention attended Approximately 150 Hindu outfits which met in Goa from June 14 to17 for a convention to chalk out a program for establishing a ‘Hindu Rashtra’ in India by 2023.

According to Rahul Kaul, national youth coordinator for Panun Kashmir, this will bring back the glory India enjoyed in ancient times. “It was Hindutva which attracted people from all across the globe and this will happen again if we adopt the Hindu way of life,” said Kaul.

Similar was the view of Bharat Raksha Manch, which said that the move had the potential to make India a superpower. “This will create in a country where no one will be appeased and there will be the same law for everyone,” said Anil Dhir, National Secretary, Bharat Raksha Manch.

Opponents have blasted the whole mission calling it a upper class conspiracy. “In their concept, forget Muslims, even the Dalits and adivasis will be reduced to second class citizens,” said Maulana Noorie, general secretary, Raza Academy. “This is false propaganda of appeasement of Muslims being spread by these Hindu forces as the ground reality is we are worse off than the Dalits,” said Noorie.

The Congress said the entire Hindutva program of HJS has the blessings of the ruling Bhartiya Junta Party (BJP). “These outfits carry out subversive activities with impunity, thanks to the support from the BJP-led Govt,” said Maharashtra Congress spokesperson Sachin Sawant.