Politically speaking, the sudden concern shown by BJP for Muslim women may not spell gains for this party in the long run. The fact that the triple talaq bill is not what Muslim women desire is not going to be understood in the same manner by women at large. Rather, the bill may prompt the latter (non-Muslim women) to deliberate and question as to where have they failed in not being favoured by the ruling party? From this angle, it would be more appropriate for the government to stall this bill and give more importance to sufferings of Indian women at large.  They should remove the religious label and give greater importance to problems faced by women of all religious communities.


The groom is seen signing Nikah Nama or Islamic marriage contract. It can be customised to any extent, but seldom this happens. 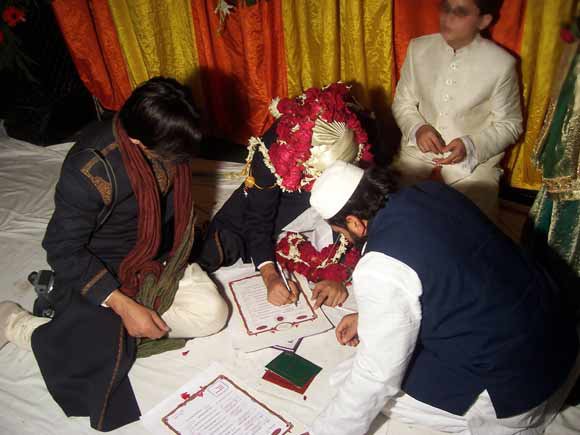 With respect to Muslim women, the bill passed in the Lok Sabha is not in their favour. There is a difference between stopping the practice of triple talaq and criminalizing the same. The bill lays emphasis on the latter aspect. There would be three-year jail term for men giving triple talaq, that is divorcing their wives by pronouncing talaq thrice in one sitting. This bill, as most have noted, does not consider the issue of reconciliation between the couple. Neither does it give consideration to the monetary problems to be faced by the divorced women and her children if her husband is packed to jail. In fact, voices are being raised at the criminalization of the talaq practice with quite a few Muslim women stating that this is not what they want.

The noise made by respected leaders on this would bear greater significance if they come out with statistics regarding how many triple talaq cases have really taken place over the past few years. How many Muslim women face the trauma of being divorced by talaq pronounced in one sitting? The manner in which several politicians are talking about triple talaq suggests as if each and every Muslim family in India is suffering from problems caused by the so-called triple talaq. The ruling party should make a rudimentary survey of Muslims associated with their government as well as BJP and learn how many of them have faced/used triple talaq in their marriages. The apex court should also pay some attention to whether the noise being made over triple talaq is hype or do statistics support this as a serious problem for Muslim women. Besides, some attentions should be paid to it as a necessity from the angle of women trapped in bad marriages. In these cases, rather than remain married, they may prefer going for divorce at the earliest possible.

Rather than making noise only about triple talaq, it would be more appropriate for respected leaders to talk about a marriage contract, with clauses against practices which lead to abuse of women. The contract should lay out categorically, with consent of bride, bridegroom and witnesses, that saying talaq thrice in one sitting would not lead to dissolution of the marriage.

It would also be more practical of leaders not to confine their concern only to Muslim women. They should also consider a marriage contract for women of all religions with strict strictures against practice of dowry. They should take steps regarding their economic problems, social injustice faced by them, increase their representation in parliament and so forth. Why is government quiet about a bill on increasing representation of women to 50% at all levels?

If the ruling party was confident that its bill on triple talaq would earn its laurels from most quarters, regarding its concern about Muslim women, it has made a wrong move. The storm raised over it certainly suggests this. Agreed, triple talaq is not a wise decision. Please note, triple talaq has been regarded as troublesome for Muslim women as it leaves no room for reconciliation, that is avoid divorce and remain married. Islam, as strongly indicated in the Quran, is not in favour of marriages ending in divorce, except as the last resort. Also, talaq is expected to be pronounced thrice, but not instantly. Each time, it is to be pronounced with a time period in between during which the husband and wife are to live separately. If before the third pronouncement of talaq, they decide against divorce, then the marriage does not end. Also, pronouncement of talaq in anger or in an inebriated state is not accepted as valid.

The voice raised by certain Muslim women and their supporters against triple talaq has apparently been totally misunderstood by the central government. Clearly, the women are against this practice as they do not want their marriages to end instantly and ruin their families. But rather than give needed importance to the key concern of Muslim women opposing triple talaq, the government has acted against it. Whether the ruling party has deliberately taken this move or has done so unintentionally is debatable. The safe way out of this controversy for BJP is to state that this bill has been framed because of some communication gap and misunderstanding on their part about what Muslim women really desire.