Ram Puniyani 24 Jan 2018
As such the whole attempt of Hindu nationalist political formations is to try to pave the way for Hindu nationalism by using the democratic secular space which the present Constitution gives.

BJP, which believes in Hindu nationalism, faces the dilemma about Indian Constitution. Necessarily it has to pay its obeisance to Indian Constitution for electoral purpose to be sure. It has to seek votes of all sections of society including dalits and other marginalized sections of society for whom this Constitution is a liberator. At present, BJP’s electoral strength is not adequate for changing the Constitution, so it cannot talk openly about the same. In addition Constitution has also emotive values for large sections of dalits, who regard it as a greatest contribution of Babsaheb Ambedkar in the direction of social change. In this light to statement of Anantkumar Hegde, the Union Minster, that BJP is in power to change the Constitution may not have matched with the overall strategy of BJP, which is to get 2/3 majority first before talking on this. Mr. Hegde, while speaking in the meeting of Brahman Yuva Parishat said “I will be happy if someone identifies as Muslim, Christian, Brahmin, Lingayat or Hindu. But trouble will arise if they say they are secular.” And also that BJP is there to change the Constitution.. Later when criticized in the Lok Sabha for his statement, he tried to circumvent his statement by saying that “if someone was hurt by his remarks about changing the Constitution and about secularism, he had no hesitation in tendering his apology.” 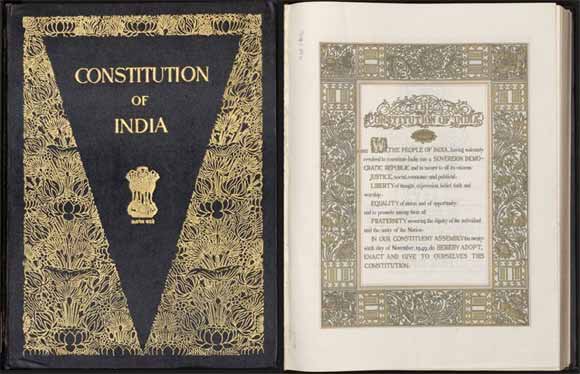 Surely BJP’s intentions have to be understood and his apology is purely strategic. BJP as a party has to work within the confines of Constitution as it has to swear by it legally. Still when BJP led NDA Government came to power in 1998, it did appoint Venkatchaliah Commission to review the Constitution; probably that was the first open and subtle ‘statement of purpose’ from its side. It’s another matter that seeing the total opposition to its move of reviewing Constitution from large sections of society, the Commission report was dumped.

After Modi led NDA Government came to power (2014), on the occasion of Republic day 2015, it issued and advertisement with the preamble of Constitution in which words Secular and Socialist were missing. In November 2017 Yogi Adityanath stated that word secularism is biggest lie in India.’

The BJP will not reveal its deeper agenda so easily at present. Still it can be understood that BJP is not comfortable with the present Constitution and laws be it the one’s related to Article 370 (Kashmir), Article 25 (freedom of religion), article 30 (about minorities setting up educational institutions). As BJP is a part of RSS combine, one has to look at what RSS ideologues state, what its associates like VHP and others say on the issue. These organizations have times and again articulated their opposition to Indian Constitution and their goal of making the one based on Holy Indian scriptures.

As such the whole attempt of Hindu nationalist political formations is to try to pave the way for Hindu nationalism by using the democratic secular space which the present Constitution gives.

RSS ideologue Golwalkar in his writings like ‘Bunch Of Thoughts’ argues that territorial nationalism, which is the basis of Indian Constitution, is a barbarism, since according to him a nation is ‘not a mere bundle of political and economic rights’ but an embodiment of national culture —in India, ‘ancient and sublime’ Hinduism. It sneers at democracy, which Golwalkar sees as alien to Hindu culture, and lavishes praise on the Code of Manu, whom Golwalkar salutes as ‘the first, the greatest, and the wisest lawgiver of mankind’.

When the Constituent Assembly of India passed the Constitution of India on November 26, 1949, RSS was not happy. Its organ, Organiser in an editorial on November 30, 1949, complained: "But in our Constitution there is no mention of the unique constitutional development in ancient Bharat. Manu’s Laws were written long before Lycurgus of Sparta or Solon of Persia. To this day his laws as enunciated in the Manusmriti excite the admiration of the world and elicit spontaneous obedience and conformity. But to our constitutional pundits that means nothing."

VD Savarkar has been the major ideologue from whom most of the Hindu nationalists draw their inspiration. He argued: "Manusmriti is that scripture which is most worship-able after Vedas for our Hindu Nation and which from ancient times has become the basis of our culture-customs, thought and practice. This book for centuries has codified the spiritual and divine march of our nation. Even today the rules which are followed by crores of Hindus in their lives and practice are based on Manusmriti. Today Manusmriti is Hindu Law."

Deendayal Upadhayay has been another major ideologue of RSS combine. He was part of Bharatiya Janasangh, previous avatar of BJP. He says that India had written a Constitution imitative of the West, divorced from any real connection to our mode of life and from authentically Indian ideas about the relationship between the individual and society.

Like previous ideologues Upadhyay also felt that the Constitution should embody a Hindu political philosophy befitting an ancient nation like Bharat, that of reducing the Indian national idea to a territory and the people on it was fallacious.. According to him the nationalist movement, from the Khilafat agitation onwards, has turned towards a policy of appeasement of the Muslim community, a policy in turn sought to be justified by the need to forge a united front against the British.

He was all through critical of Indian Constitution, as he argued his case for Hindu nation. His ideology seems to be one of the major inspirations for present leadership of BJP. BJP’s discomfort with articles 25, 30 and 370 etc. is mainly as these articles aim at affirmative action in a plural diverse society. These draw from the basic notion of Equality inherent in Indian constitution. Most of the ideologues, the source of BJP ideology uphold Manusmririti, no wonder this was the precise book which architect of Indian Constitution, Babasaheb Ambedkar consigned to the flames!  (Books by the author are available at www.pharosmedia.com/books)