What significance does minority religious, social, and political identity have in a majoritarian democracy? Specifically, what significance does the Muslim Indian community have in the kind of a majoritarian democracy that India is evolving into? Of late, many intellectuals and political analysts have stated that the Muslim Indian community is being reduced to a mere vote bank, which may not be completely incorrect. If the emergent trends are any giveaway, the minority space is continuously sinking with the ever-increasing “majority muddling” in issues relating to the religious and social identity of the minorities. This is a direct derivative of indiscriminate religious polarization maneuvers unleashed by the Right-Wing to harness power. 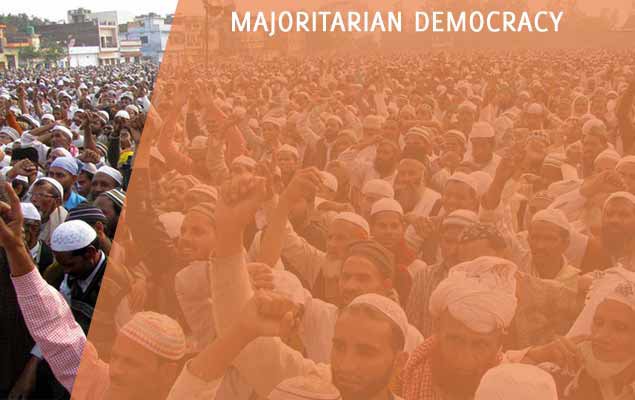 “Propaganda must not investigate the truth objectively and, in so far as it is favourable to the other side, present it according to the theoretical rules of justice; yet it must present only that aspect of the truth which is favourable to its own side.” He further writes, “The receptive powers of the masses are very restricted, and their understanding is feeble. On the other hand, they quickly forget. Such being the case, all effective propaganda must be confined to a few bare essentials and those must be expressed as far as possible in stereotyped formulas.”

This ought to ring a bell – concerning the increased incidents of receding minority space and increased majority muddling in the religious, social, and political identity of minorities in India. What started with one lynching in the name of cow protection soon became a norm – restricted feeble masses forgot – or at the best, ignored – the succeeding episodes. Another string of incidents and phenomena come into prominence when we investigate Hitler’s idea of presenting the truth according to theoretical rules of justice; yet displaying only that aspect of the truth which is favorable andconfining the propaganda to “few bare essentials.” The phenomena relate to the negative public opinion formed against some basic religious and social identity of the Muslim Indian community; the few bare essentials. The offensive countenance of these phenomena is that a negative public opinion is indoctrinated through political blitzkrieg almost always when the issue is subjudice.

Two recent developments with respect to the Muslim Indian community in this regard are noteworthy – the first being the Triple Talaq Bill and the second being the Supreme Court’s sudden conspicuous consideration towards practices like polygamy and nikah halala. What makes the developments interesting is the precise timing – when the next General Elections are just around the corner. These developments may well be seen as part of the new political blitzkrieg against the minorities, which the Bhartiya Janta Party (BJP) and its Right-Wing coterie is expected to unleash to consolidate Hindu votes. The modus operandi shall be the same as Hitler cited – “… not investigate the truth objectively and, in so far as it is favourable to the other side, present it according to the theoretical rules of justice; yet it must present only that aspect of the truth which is favourable to its own side.”

While it may be part of the righteous duty of the Honorable Supreme Court to investigate such matters, the paradox of bearing of such developments is that they are mostly guided by popular (or unpopular) opinions largely politically maneuvered against the minority community. Shah Bano Case of 1980s is a manifest exemplification of this trend of politically maneuvered public opinion being orchestrated against the religious and social identity of the Muslim Indian community, a trend that promises to regenerate with every polarization blitzkrieg in the future. [It may be noted that the objective of this article is to analyze the political blitzkrieg behind such incidents, and not to comment on the judicial or legal aspects of the related judgements.]

The quantum of such landmark judgements is that while such judgements are awarded in individual cases, they effect the general religious and social identity of a democratic minority. Liberals and representatives from the majority community often justify these by disarrayed logical fallacies by equating cases like Shah Bano with social evils such as Sati – an argument of logical fallacy such as this is precisely what defines “Majority Muddling”.

Shah Bano case witnessed a judgement in favor of maintenance given to an aggrieved divorced Muslim woman, a maintenance mechanism that is not typical of the provisions of talaq as per Islamic jurisprudence. If objective cognizance (alienated from the propaganda aspect) is considered, Shah Bano was a victim of misuse of the Islamic jurisprudence on talaq and polygyny in an individual capacity – the case was not really about the issue of absolute or duration-specific maintenance after divorce under Islam. Shah Bano’s husband married another woman and stopped supporting Shah Bano and her children while she was still his wife – an act that is obviously and strongly against Islamic jurisprudence. She was later divorced because her husband wanted to abdicate his financial responsibilities towards her. Since Shah Bano’s husband married another woman while he was still married to Shah Bano, it was his responsibility under Islamic jurisprudence to support Shah Bano.

However, the Shah Bano case was not treated as a one-off instance of misuse of the Islamic jurisprudence. The case was propagated as an issue related to maintenance after divorce – while objectively it should have been presented as an example of misuse of Islamic jurisprudence of divorce and polygamy to eschew from taking up the financial responsibilities. The case was in violation of not just divorce laws but also of equitable justice towards both the wives in case of polygamy under Islamic jurisprudence. This aspect of the case; however, was never highlighted and the judgement that went in favor of absolute maintenance for Shah Bano was used as a premise to justify and press for absolute maintenance in all divorce cases.

Triple talaq has been treated in the same semblance – a rare practice being generalized and besieged as an oversimplified case of abuse of women’s right under Islamic jurisprudence. National Herald recountsthat “The divorce rate among Muslims in the 2011 Census is lower than among Hindus. And while there is no survey on cases of ‘triple talaq’, the incidence could be as low as 1% of the total.” If instances of triple talaq are as low as 1%, what made tripe talaq an issue of grave national importance to the extent that the Supreme Court had to take cognizance and declare it as a criminal act?

That the issue was politically maneuvered and orchestrated against the minority community is also evident from the fact that “Neither the government nor the Law Commission has conducted any survey on the extent of triple talaq among Indian Muslims.” The National Herald report further highlights that Bharatiya Muslim Mahila Andolan (BMMA) was the only organization that claimed to have surveyed the instance and the results were exceptionally statistically skewed – “The discrepancy could be because the two surveys done by BMMA covered 4,710 Muslim women from 10 states in one survey and 117 Muslim women from eight states in the second.” Obviously, the issue had been raked up and staged to become a national issue as part of the anti-minority political blitzkrieg. The immature and redundant role played by the All India Muslim Personal Law Board (AIMPLB) in this entire episode is another facet that adds to the agony.

With Supreme Court now set to scrutinize the practice of polygyny and nikah halala (nikah halala is not a practice endorsed by Islamic jurisprudence anyways), these aspects are bound to have an alluring effect in terms of religious polarization. Once again, the issue of polygamy is not eccentric to Muslims alone. A Times of India report records “… polygamy to be highest among adivasis, Buddhists, Jains, and Hindus, with Muslims right at the end.” The report further states that “… bigamy is basically a problem of a male-dominant culture than religion." Nikah halala, as already pointed out, is nothing but a blatant misuse of Islamic jurisprudence provisions – an offshoot of the same male-dominant culture borrowed into the Muslim Indian community. [However, as per NDTV, it is “a practice intended to curb the incidence of divorce.”] In objective contemplation; therefore, raking up of these issues against the Muslim Indian community is another attempt to orchestrate public opinion against the vulnerable aspects of our religious and social identity.

Another veracity that must be considered is that the success of such political blitzkrieg of attacking religious and social identity hinges on derisive reactions against it. The role of Muslim social and political organizations such as AIMPLB or All India Majlis-e-Ittehadul Muslimeen (AIMIM) shall be of prominence in this respect. AIMPLB took a defendant role in case of the triple talaq issue, and went to the extent of excluding, rejecting, and boycotting participation in any productive dialog initiated by the Law Commission. While AIMPLB’s legal arguments in favor of triple talaq were fairly hilarious and puerile, AIMIM’s stand was seen to be equally belligerent to its core.

The alternative is to organize a cogitated discourse based on legal arguments that favor the case of Islamic jurisprudence and the freedom of religion as guaranteed by the Constitution. This moment also calls for an expanded role from social organizations such as Institute of Objective Studies (IOS) and Majlis-eMushawarat. Such politically neutral organizations should come to the front and steer the community through these misadventures. I will prudently avoid calling upon individuals though I strongly believe many individual unacclaimed leaders also have the potential to lead the change in their individual capacities.