The Milli Gazette 05 Feb 2013
By John Kaminski
“New Jerusalem” movement eyes takeover of three
eastern states, near the centre of opium production
A second "nation" of Israel today is nearing completion smack dab in the middle of the world’s premier drug producing region, the Golden Triangle of Burma - located right on the border between India and the military dictatorship now known as Myanmar, which is the real model of the human future.

Activities presaging the creation of a second Israeli state are well-known in India, but not elsewhere. Most everyone remembers how the first Israel popped onto the world scene in 1948 and has continued mass-murdering its neighbors and hapless nations that fall under its sway ever since. 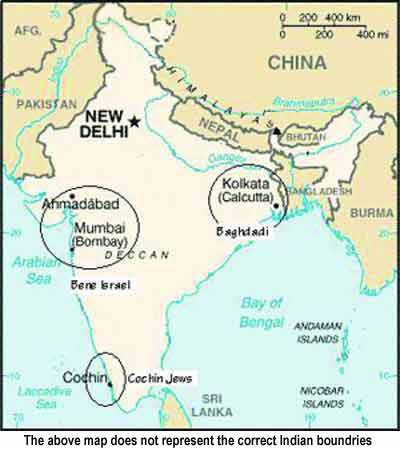 Precisely, political stealth moves over the last three decades and an aggressive outreach effort by "rabbis from Israel" to convert inhabitants of the three easternmost provinces of India to Judaism have been reported for years by Indian patriots in the Himalayan foothills.

The Deccan Chronicle, a newspaper in Hyderabad, reported that by means of "a ritual bath," rabbis promise penniless Christian, Muslim and pagan converts a trip to Israel and preferred employment status, then buy votes of peasants, take over local boards and pass laws to legalize their manipulations, the same way they do everywhere else.

While the core issue in this geopolitical expansion of Rothschild-Rockefeller money empire is proximity to the centuries-old centre of opium production run by the generals in Myanmar, the creation of a new Israeli state in the exact centre of China, India and Southeast Asia augurs badly for the peoples of the region, as the current level of destabilization among Israel’s neighbours in the Middle East clearly illustrates. And not to be forgotten is that the world's oldest still functioning oil field is located in this area and Tripura state is reported to be floating on a sea of natural gas.This is a history that would shame Americans if they knew about it.

Back in World War II, the Burma Road was essentially built with American taxpayer money to provide an alternate route to ship opium out of China because of the Japanese blockade. Vietnam vet and author Philip Ledoux writes: "The Burma Road was built by America and France under the guise of humanitarian aid to the Chinese government. On the return trip, the Americans supplied and manned trucks hauled out of the Bay of Bengal hundreds of metric tons of Chinese white opium for the international markets."

Indian patriots in the Himalayan state of Himachal Pradesh today describe the region as the new pot-growing capital of the world, with Israelis in every community guiding the industry clear on up to the Indo-Tibetan border. The latest news from that beautiful border area is this: Dharamshala became Tibetan Dalai Lama's de facto capital ever since the Chinese annexed Tibet. Some of the world's most high profile leaders and Hollywood stars (like Richard Gere) are regular visitors. In these peaceful parts, what are 20,000-plus Israelis doing? Many in Manali town and its surrounding villages speak Hebrew. Near Dharamshala no less than 10 villages have been taken over by the Israelis. It has long been known that the Dalai Lama gets a very large annual stipend from the CIA, and is planning to create a Buddhist independent nation across the Himalayas, stretching from Ladakh in Kashmir to Arunachal Pradesh in Northeastern India.

The creation of a New Israel right in the middle of the major East Asian markets sheds new light on the American military assaults on Pakistan and Afghanistan, as its war against the Muslims of the region more and more resembles the Jewish-dominated political cooptation and military oppression in the Middle East.

Millions of penniless Indian and Bangledeshi peasants have for centuries provided slave labor to the British overlords who have ruled Burma with puppets and who have plagued China and India with their opium. China in particular has every right to bear seriously ill-will against the Jewish Sassoons of the world who control people's minds through exploitation of their weaknesses. This is the basis for all the wealth that has been stolen and deposited in the bloody coffers of the Western corporate mindlock. And the liberty-seeking peoples of the world suffer mightily from this "business" arrangement.

Mizoram, Manipur and Nagaland. These are the three states that border Myanmar where sinister Jewish manipulation of desperate societies has become obvious.The Milli Gazette Online reported this. The long-speculated view expressed by many observers that the United States seeks a foothold in the region seems to be vindicated when the US rushed, uninvited, to "help" Assam government soon after the Nagaland-Assam blasts. In its urgency, the US directly approached Assam chief minister bypassing New Delhi.

The North-East, surrounded by many foreign countries including China and Bangladesh, appears, in a degree, to fit in a certain geopolitical strategy of Uncle Sam. The presence of religion-driven Christian militant groups seems to have created an atmosphere where an alliance of convenience may be forged between the interested parties. With a Church-backed "pre-empting" President at the helm in the US, the process of either making "revelational" biddings in the region or getting directly involved on some pretext seems to be on the cards. Many people suspect a complicit understanding between Christian missionaries (majority of them are from the US, and most of them are not innocent propagators of Christianity but linked to the worldview of Bush as shown by Vijay Prasad ("Eastward, evangelical soldiers!" Frontline, 12-25 February 2005) and the on-going drive to identify many tribes in Mizoram and Manipur as "Jews" (which has been earlier reported in the MG). This has far-reaching consequences.

Now the Aizawl-based Chhinlung Israel Peoples' Convention, with a 0.25 million strength complete with a flag, is hoping to establish a "New Jerusalem" in the North-East. Streams of Jewish rabbis are coming to Mizoram and Manipur to refine the "Jews" to be ultimately fit to be an "integrated" member of the World Jewry. The Convention's chairman, conforming to the present global trend of "fulfilling" Biblical prophecies, says, "The Torah (Old Testament) states that there shall be one holy land in the west and one in the east" (The Week, 12 Sep. 2004) . And this "New Jerusalem" has come up in the North East at the expense of the other peoples of the region.

This remote region of India north and east of Bangladesh is shrouded by the awful memory of what has come to be known as the Nellie Massacre, when in 1983, 1500 Muslims were hacked to death after being promised it was safe to vote by Indian leader Indira Gandhi. Numerous government inquiries produced no perpetrators and no motives. The Nellie slaughter looked like a manipulated false flag massacre because Muslims and the indigenous Tiwas are not enemies. The same result more recently occurred in Bombay, after 60 Uzi toting commandos shot up the Jewish Shabad House. On Nov. 26, 2008, a handful of terrorists, well trained and well armed, entered some high profile buildings and hotels, after killing three top anti-terrorist police officers and spraying bullets on common citizens in Mumbai. Why was Shabad House never investigated? Muslims were rounded up, but the Jews, the ones who pulled the caper, were given a free pass, reminiscent of U.S Homeland Security czar Rabbi Michael Chertoff releasing 60 Israeli terror suspects immediately after the 9/11 incident. Professor Michel Chossudovsky of globalresearch.ca stresses that the series of terrorist attacks across India seek to create (a) social division between Muslims and Hindus within India, (b) tension between India and Pakistan, (c) conditions for US military operations inside Pakistan (which has been going on) and to expand the intervention in South and East Asia.

In regard to the Jewish outreach in easternmost India, The Deccan Chronicle also reported that Mr L. Thanggur, a church leader in Churachandpur, describes these conversions to Judaism to be only because of economic reasons. "The conversion ceremony is funded by the Israeli government through Shavei Israel, an organisation that has been trying to locate the 10 lost tribes of Israel," Mr Fanai said.

Meanwhile, arrayed against this stealthy Jewish invasion are the Indians who seek a return to pre-British India as a model of civilization for all the world to finally comprehend. This seems like a very appropriate response to Jewish plans to build New Jerusalem in Nagaland. Not only that, but it also sounds like a good way to get rid of this centuries-old toxin called Jewish imperialism and build a country in which it's safe to build a home without having armed guards to protect you because you've stolen the land from someone else.

John Kaminski, a writer who lives on the Gulf Coast of Florida, is the author of The Day America Died: Why you shouldn't believe the official story of what happened on September 11, 2001 - http://johnkaminski.info/