Kasganj Violence: Unveiling the Anatomy of a Riot

Communal violence has been the bane of our society. There had been a perception that this violence is a spontaneous clash between two communities. Over a period of time, it is becoming clear that it is not a spontaneous phenomenon, nor is it a clash between two communities, it is a planned violence. Scholars basing themselves on analysis of the inquiry commission reports and the pattern of riots show that violence is generally a planned event to polarize the communities for electoral benefits. Surely apart from communal parties other parties also have to be blamed for various slips of mainly omission and partly occasionally for active commission of the violence. The main source of this curse of our society is communal politics, which aims to rule in the name of religious identity. If there was any doubt about it, that got cleared in the Kasganj violence in UP on the Republic day 2018. 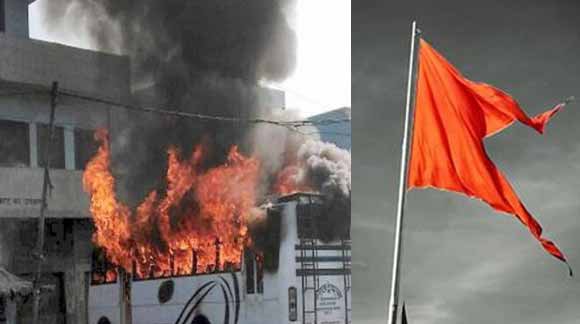 The story so far is that in Kasganj in Shahid Abdul Hamid chowk a program was organized by minority community to celebrate the day, chairs were laid etc. The motorbike rider youths nearly 90 or so belonging to RSS affiliates ABVP came, carrying tricolor and the saffron flags. They also had clubs and other armaments as per some reports, videos. They insisted at the Chowk to remove the chairs as they had to pass from there. The local Muslims asked them to join the program rather than disturb it. The clash ensued. The tricolor-saffron flag wielding youth shouted the slogans, ‘Pakistan Murdabad’ (Death to Pakistan), Hindi Hindu Hindustan, Katve Bhago Pakistan, (Muslims go to Pakistan) ‘Is Desh Mein Rahna hai to Vande Matram kahna Hoga’ (If you want to live in this country, you will have to say Vande Matram). In the clash and bullet firing that followed two men received bullet injuries of which Chandan Gupta, who was also a participant of the bike rally died and other Muslim labor Naushad is being treated in hospital, having been severely injured.

A section of TV and other media presented it as if Muslims were resisting the tricolor hoisting so they opposed the bikers and forced them to shout pro Pakistan slogans, something which is far from truth. The role of a section of media is very negative in communal violence. Police as usual did not stop or control the inciting mob. On the following day Rajveer Singh, BJP MP, at the cremation of Chandan Gupta further added to the fury after which the mobs resorted to selectively burning vehicles and shops in the Muslim locality. Yogi Adityanath Government has by now announced a compensation of 20 Lakhs for Chandan Gupta, hopefully compensation for other injuries and damages will be forthcoming.

An interesting sidelight took place this time around. Raghvendra Vikram Singh the DM of Barilly in his Hindi face book post criticized the event saying that “by now it has become a trend to take out procession in Muslim localities and shout anti Pakistan slogans. Are these people Pakistanis?” The post was taken down after intimidating trolling and the state administration expressing displeasure over the post, he wrote, "I apologize if some sentiments were hurt by what I said, but there is no denying that our secular ethos is at stake; there are things which need to be protected at all cost." Another officer, Rashmi Varun (Deputy Director, Statistics, Saharanpur) in another post said that Chandan has been killed by saffron politics. (Hindustan.com)

The tragic violence has led to loss of one innocent life; injuries to few and loss of social property. The compensation so far has been selective. The whole incident and the face book post of DM reveals the deeper dynamics of how the violence gets orchestrated, The mechanisms of these do keep changing over a period of time, but what is constant is an evil innovation of techniques to target the vulnerable minorities. Earlier it had been taking the procession with loud music in front of the mosque and putting beef in temple. With time one saw that in Mumbai violence of 92-93 Maha Artis (Invocation Prayer) were devised to mobilize Hindus, the dispersing mass after the prayer would indulge in anti minority violence. One has also seen the issue of love jihad being used in Mujjafar nagar violence. The girl who is supposed has been victim denied being harassed by the Muslim boy, but the mobilization of Jats-Hindus continued nevertheless. One can see the changing pattern of issues which are used to incite the violence.

What strikes one in Kasganj is that anatomy of violence is very clear. Seems this may be a preparation for the elections which are in the offing a year later. The tiranga (tricolor) issue is quite paradoxical for Muslims. They hurl it or abstain from it, both ways they are damned. What is more interesting is that tricolor, which was opposed by RSS at the time of independence on the ground that number three is evil as per Hindu ethos and that the real flag of Hindus is saffron alone, today stands to use the same tricolor to browbeat and to make it a vehicle for polarization, through its affiliates like ABVP and VHP.  It seems as a backup to what has happened in Kasganj now RSS is organizing rallies in different cities and towns across the state. The rallies at this juncture look to be a “show of strength” in which uniformed cadres of the RSS and its affiliates in the Sangh Parivar will be marching with sticks.

To cover the whole thing BJP leadership wants to project that minorities opposed the tricolor and shouted Pro Pakistan slogans! One knows that all through BJP electoral strength has been going up courtesy violence and consequent polarization. The society needs to protect itself against such aggressive abuse of tricolor for inciting violence, and be careful not to fall in the traps of provocation on any ground whatsoever.