The Other Side of BJP’s “Success” in North-East!

Nilofar Suhrawardy 08 Mar 2018
Where has the Congress really erred in stumbling here after having given the BJP a strong fight in Gujarat assembly elections? Besides, does poor performance of Congress signal danger signals of leadership of Rahul Gandhi?

Though the Bharatiya Janata Party (BJP) has succeeded in securing power in three north-eastern states, where assembly elections were held recently, would it be fair to view these a result of Modi and/or saffron wave? Also, what does the failure of the Congress and CPI-M really indicate? Have these two been wiped out totally? Also, where has the Congress really erred in stumbling here after having given the BJP a strong fight in Gujarat assembly elections?  Besides, does poor performance of Congress signal danger signals of leadership of Rahul Gandhi? Of course, BJP’s victory and its alliance with regional parties appears to have ensured it command over three more states. Elation expressed by the party leaders and also hype raised by them over victory here being an “ideological” win, etc, demands deliberation over several key issues. 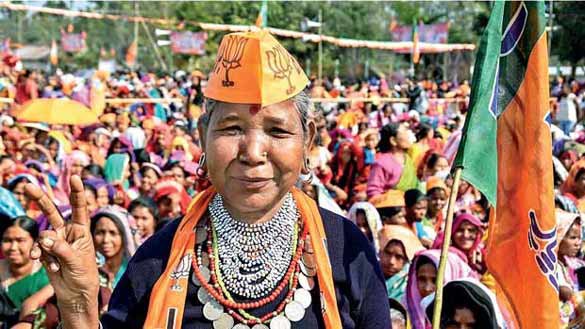 At the outset, it seems as if BJP has certainly outsmarted Congress in ensuring its alliance with regional, local leaders in the electoral battle, in particular the recent assembly elections. Here, it may be noted, the Gujarat assembly polls were contested primarily between the BJP and Congress. Were several key regional parties involved in Gujarat also and had BJP chosen to align with them, Congress may not have been able to give it a strong fight. Also, in Gujarat, Congress paid special attention to securing support of several factions who had turned against the BJP. A similar political strategy was apparently not exercised by Congress in the three north-eastern states, Tripura, Meghalaya and Nagaland. Even if were, probably, with BJP at the centre, the regional parties apparently chose to give it greater importance than they gave to Congress in their pre- and post-electoral political strategies. This point is supported by Congress failing to head the government in Meghalaya despite it having won the largest number of seats. An alliance of parties, including BJP, which won lesser seats than Congress, has formed the government here.

Interestingly, the percentage of votes won by BJP in all the three states does not suggest that it has literally swept the polls and wiped out its rivals from putting up a strong fight against it in forthcoming parliamentary as well as assembly elections here. In Meghalaya, the BJP has received less than 10% votes, in Nagaland – around 15% and in Tripura – 43%. Paradoxically, the seats won by all parties are fairly different from the percentage of votes won by them. In the 60-member Tripura assembly, BJP has won 35 seats, which is more than 50 percent of the constituencies. What is more amazing is that the key rival in Tripura, CPM won 42.7 percentage of votes, that is, it is behind BJP only by 0.3% in securing votes. CPM has won, however, only 16 seats, that is, its members constitute around 26% of Tripura assembly. The CPM members are behind BJP by more than 30% in Tripura assembly.

Given votes won by BJP and its rival parties in the three states, definitely, it is as yet too early to state that the saffron wave has swept across this region. The votes won by Congress and other rival parties are a minor indicator of their still retaining their political base here. However, what cannot be missed is BJP’s political ploy, that of entering into alliances with regional parties, when need be, to ensure that its members remain part of the state government. On the basis of this, it would be wrong to assume that BJP has “succeeded” in these three states on its own strength and that voters have supported it strongly. This is supported by the fact that in Meghalaya, seats won by BJP (2) are less than those gained by four other parties: Congress (21), National People’s Party (19), United Democratic Party (6) and People’s Democratic Front (4).

In Nagaland, BJP falls third in rank with 12 seats, while Naga Peoples Front has won 27 and National Democratic Progressive Party-16. Yes, as mentioned earlier, electoral results in Tripura present a different image with BJP in the lead having won 35 seats, CPM -16 and Indigenous Peoples Front of Tripura – 8. The votes won by CPM are, however, only 0.3% less than those gained by BJP. At the same time, it cannot be ignored that political and electoral strategy exercised by Congress has faltered against that of BJP. Nevertheless, seats and votes won by BJP are hardly suggestive of either Modi or saffron wave having “won” elections in these three north-eastern states. The situation would have been different if BJP had won at least 50% votes in each of these states. The political strength gained by BJP here, as suggested earlier, rests primarily on its alliance with small regional parties.

Also, there is another side to the hype created about BJP’s victory in these three north-eastern states. In essence, neither of these is going to be of great help in BJP in the forthcoming parliamentary polls. In the 545-member Lok Sabha, Tripura is represented by one member, Meghalaya by two and Nagaland by one!