Ram Puniyani 14 Mar 2018
It is at this point of time that Hindu Mahasabha and RSS, who were upset due to social changes parallel to freedom movement that they started talking of Hindu Unity!

RSS is one of the only organizations, which claims to be cultural and controls the political agenda of the National ruling party. Over years taking further its agenda of Hindu rashtra, it has grown and is the largest organization in the country. Its Chief, Sarsangh Chalak (Supreme Dictator) is one who not only controls the RSS, but indirectly exercises control over all the affiliate organizations like BJP, VHP, Bajrang dal, ABVP and hundreds of outfits scattered in most of the arenas of our social and political life. Its Chief keeps spelling out its agenda on occasions, the one held at Agra, Rashtroday Samagam (National Awakening Conclave, 24 Feb 2018), was one such where he spoke on issues related to the agenda of Hindu Rashtra. Many of the formulations presented by him may sound very bizarre, but seems these are the subtle expressions of deeper agenda of this organization. 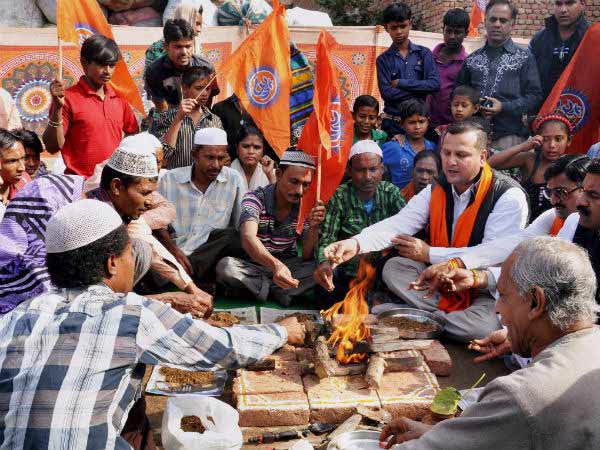 He said that Hindus should unite, and not fight along caste lines. Hindustan is the country of Hindus, and they have no other place to go. What he is calling as fight along caste lines, as such are the movements for social justice. Struggle against the caste structure of Hinduism has been old, the initial one’s were in the form of Lord Gautama Buddha’s teachings and later Saints like Kabir, Tukaram and Namdeo articulated anti caste sentiments in their works of profound wisdom. What is being called as fight along caste lines begins during colonial period with efforts of the likes of Jotirao Phule who ensured that education reaches the untouchables. Ambedkar took this further and struggles for caste equality picked up.

It is at this point of time that Hindu Mahasabha and RSS, who were upset due to social changes parallel to freedom movement that they started talking of Hindu Unity! They stand for social status quo while likes of Ambedkar will go for annihilation of caste. So Ambedkar burnt Manu Smriti and later became the Chairman of drafting committee of Indian Constitution, which gives us Equality. This lofted principle of equality was also backed up by affirmative action from the state to ensure that equality does not remain on paper but state is the agent to bring in substantive equality.

Hindu nationalist politics; as it is for status quo; opposed reservations and affirmative action. On the pretext of merit, it launched ‘Youth for Equality’. One understands those who are on the side of social equality have been talking of measures to eradicate structural inequality and work towards social justice. So What Bhagwat says may sound innocuous, but it hides the deeper agenda of his organization, and that is also manifested when different leaders from this stable call for changing Indian constitution and when their ideologues like Golwalkar stand to praise Manusmriti and as they feel uncomfortable with Indian Constitution.

What does he mean that Hindus have no other place to go? He may be unaware that many Indians, Hindus, included have been undertaking economic migrations all over the World. While US, Canada, Australia and UK are the hot favorites, there are many other countries where Hindus have been emigrating and settling. His statement is factually incorrect.

Also saying, this land belongs to Hindus is a simplification. As such the barometer of who is an Indian is Indian Constitution. Who came to constitute India becomes clear from the composition of freedom movement in which people from all religions participated in equal measure. In earlier history also this land has been thriving with diversity when nomadic tribes initially and kings of different dynasties Shaaks, Huns, Muslim, came as invaders in North, while Zoroastrians came through sea route and initial Islam and Christianity came to Malabar Coast in Kerala. Even word Hindu initially began as a geographical category, and Hindu as religion, came to be constructed much later.

It is true that India is multi religious, but to say that all those living here are Hindus is a travesty of truth. To say that Hindus celebrate diversity as Bhagawat said; is a bigger lie. Hindutva ideologue Savarkar went on to define Hindu as one who regards this land as Holy land and father land. Golwalklar focused on the greatness of scriptures, so where do Muslims and Christians stand in this scheme of things? As such even large sections of Sikhs, Buddhist and Jains will also not like to be labeled as Hindus. As far the diversity, he is right that large section of Hindus in the mould of Gandhi respect other religions and diversity emerging from that. As far as the agenda of RSS combine is concerned, it is based on sectarianism and narrowness. The central agenda of their politics is not around economic betterment, social and gender justice but is structured around divisive issues which lead to intolerance. Their major issues Ram Temple, Mother Cow, Love Jihad, Vande Matmram and Ghar Wapasi are constructed around rejecting the diversity.

Most of the utterances of this combine are far away from what the Indian Constitution says. His assertion that all those who regard Bharat Mata as their mother, again is in a mould which is far away from Indian Constitution’s values. Constitution tells as we are India that is Bharat. To bring in Bharat mata ki Jai, which people from some religions may not be comfortable with is a deliberate ploy to bring narrowness and intolerance in our political life. To say that Muslims are also Hindus, is an intimidating statement. First to say they are Hindus and then to insist that as Hindus they have to respect scriptures like Manusmriti, to worship lord Ram and cow, seems to be a clever move.

Bhagwat calls Rana Pratap's battles as part of freedom struggle. This is not innocuous, Rana Pratap fought for his Mansabdari (status) against Akbar, not for India against British. As per Bhagawat battle against Muslim king automatically makes you part of freedom movement not knowing that even Akbar was represented by Raja Mansingh in the battle about which he is referring to!