Indian anti-colonial struggle has been the major phenomenon which built modern India into a secular democracy. Many of the political streams were part of this movement which struggled in their own way to drive away the British. There were some, the ones’ who held on to nationalism in the name of religion, who were not part of this and now in order to gain electoral legitimacy, either they make false claims about their being a part of it or try to distort the events to denigrate the leaders of freedom movement, particularly Jawaharlal Nehru. This came to surface yet again when Mr. Narendra Modi was hoisting Indian flag on the occasion of 75th Anniversary of proclamation of Azad Hind Government. At the event he said that the contributions of Bose, Patel and Ambedkar have been ignored by the ruling Nehru-Gandhi family.

Nothing can be farther from truth than this statement of his. One knows that Ambedkar was made the minister in the first Cabinet of India; he was also given the task of being the Chairman of drafting committee of Indian constitution and was asked to draft the Hindu code bill. Sardar Patel was the Deputy Prime Minster, looking after the Home ministry. The compilation of Sardar Patel’s letters has been edited by Durga Das, ‘Sardar Patel Correspondence’. As per this book it becomes clear that Nehru and Patel were very close and till Patel was alive most of the decisions taken were with his consent or due to his initiative. Patel regarded Nehru as his younger brother and his leader; both. Earlier Modi tried to propagate that Nehru ignored Sardar Patel and did not attend his funeral in Bombay. Moraji Desai’s biography describes that Nehru did attend the funeral; this was also reported in the newspapers that time.

As far as Netaji Bose is concerned, Nehru and Bose were close ideological colleagues. Both were socialists and part of the left-wing of the Congress. Unlike the followers of Hindutva politics, Bose was very secular. Hindu nationalist leaders attacked Subhas Bose incessantly as he dared to reserve jobs for Muslims when he was elected to lead the Calcutta Corporation. Bose was aware of the tremendous injustice that Muslims faced in recruitment. It was Bose who opposed the Muslim and Hindu communalists both. In Tripura Convention of INC, Bose was elected the chief, but Gandhi was opposed to him mainly on the ground of non-violence. Bose tended to support violent means. Due to opposition within INC, Bose left Congress to form Forward Block, a left party, which has been part of left coalition in West Bengal for a long time. Bose and Nehru were on the same page as far as future of industrialization and public sector was concerned. Bose’s biographer Leonard A Gordan writes about his ideology: “As per Bose, each [person] should privately follow his religious path, but not link it to political and other public issues. Throughout his career, he reached out to Muslim leaders, first of all in his home province of Bengal, to make common cause in the name of India. His ideal, as indeed the ideal of the Indian National Congress, was that all Indians, regardless of region, religious affiliation, or caste join together to make common cause against foreign rulers.”

The major difference from Gandhi-Nehru on one side and Bose on the other was the role of Congress during Second World War. Congress in due course came to take anti-British stance and Gandhi launched the Quit Indian movement in 1942. Bose operated on the ground that an alliance with Germany-Japan may give freedom to India. It was really doubtful whether alliance with fascist forces was the right way. In case of their victory India might have come under the control of Japan-Germany axis which would have pushed India back by many steps. While Congress opposed British through mass movement, Bose launched ‘Azad Hind Fauj’ (AHF). His respect for the Hindu Muslim syncretism was also exhibited when he offered a Chadar on the Mazar (tomb) of Bahadur Shah Zafar in Rangoon, Burma, the leader of 1857 uprising as a symbol of Hindu Muslim unity and pledged to bring his mortal remains to Delhi, to bury in Red Fort. Hindu Mahasabha actively supported British war efforts by urging Indians to join the British army. Savarakar urged upon his followers to be part of War committees to support British Empire. British accommodated leaders of Hindu Mahasabha on war committees. 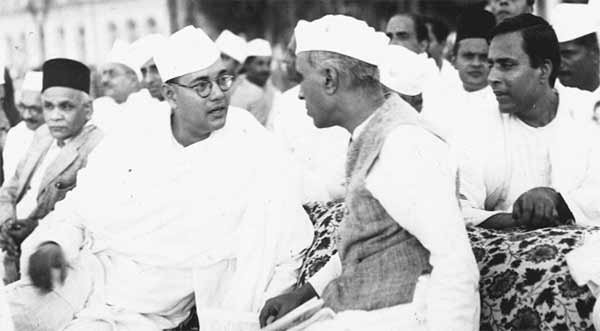 Savarkar also said ‘No support to armed resistance against British’. It is interesting that while Netaji was fighting the British from across the border, Savrkar and Hindutva nationalists helped the British army which was fighting AHF of Subhash Bose! The claims that Modi and Co. is following the footsteps of Netaji are a claim which has no substance. The matter of fact is that the efforts of Savarkar were acting against the interests of army raised by Netaji. In contrast, while Congress did not agree with Netaji’s line of action, it was Congress which raised the legal support to fight the cases of the personnel of AHF in the aftermath of the war. Bhulabhai Deasi, Kailashnath Katju and Nehru himself came forward to the battle in the courtrooms on behalf of AHF.