This 30th January 2019, when the whole country was observing the 71st martyrdom day of ‘Father of the Nation’, Mahatma Gandhi, the members of Hindu Mahasabha recreated the murder of Gandhi in Aligarh. Led by Hindu Mahasabha Secretary Pooja Shakun Pandey, a group of saffron wearing workers assembled with preparation for video shooting. Pandey fired three shots on the effigy of Gandhi and blood started dripping from the balloon behind the effigy. The Assembled Hindu Mahasabha workers shouted slogans condemning Gandhi and hailing Godse, the murderer of Gandhi. They shouted Mahatma Nathuram Godse Amar Rahein (Long live Nathuram Godse). They declared that from this year on they will recreate Gandhi murder every year the way Ravan’s effigy is burned on Dusshera day.  The video went viral. Pandey’s facebook post also showed an earlier picture of hers’ with BJP leaders, ex MP Chief Minister Shivraj Singh Chauhan and Central BJP minister Uma Bharati. Police has filed criminal cases against some of those participating in the event. 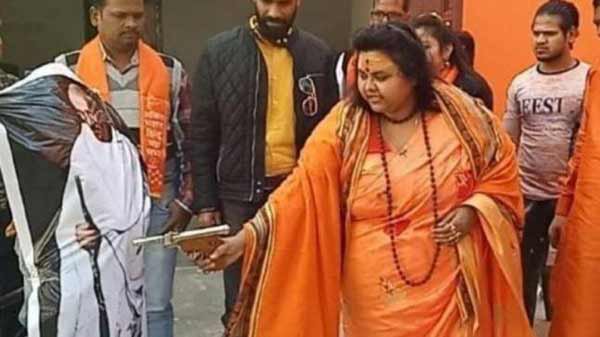 The hailing of Nathurm Godse, Vinayak Damodar Savarkar and attacking Gandhi has been the plank of Hindu Nationalists (Hindu Mahasabha and RSS). Few years ago in a public meeting Congress President Rahul Gandhi stated that RSS people killed Gandhi, a case was been filed against him, and RSS wants him to apologize as Rahul Gandhi holds on to his statement. A few years ago one leader of BJP, Gopal Krishnan, had said that Godse picked up the wrong target; he should have killed Nehru instead of Gandhi as Nehru was responsible for partition. Sakhshi Maharaj, the BJP MP stated that Godse was a patriot. Farmer RSS Sarsanghchalak Rajendra Singh had said that Godse had right intentions but his method was wrong.

None of these Hindu nationalists ever targeted Muslim League or Jinnah, who among others, had played a role in the partition of the country. During last few years those supporting Godse and Savarkar are becoming more assertive. There are few differences in the two branches of Hindu Nationalists, Hindu Mahasabha and RSS, still all those who oppose Indian nationalism and values of Indian Constitution have been covert or overt supporters of the ideology due to which Gandhi was murdered.

The plea given for Gandhi murder was that it’s due to Gandhi that Muslims became bolder, demanded Pakistan, and India had to give 55 corers to Pakistan. As a matter of fact the attempts to murder him had been on from 1934. The 30th January 1948 attack was the sixth in the sequence. Godse himself was involved in two earlier attacks. Nehru summed up the national mood when mourning the death of his mentor saying ‘light has gone and there is darkness around’. Teesta Setalvad in her compilation, ‘Beyond Doubt’ comprehensively deals with the issue.. She quotes from Home ministry circulars, eminent books dealing with the issue (Jagan Phadnis –‘Mahtyamechi Akher’, Y.D. Phadke ‘Nathuramayan’ and Chunuibhai Vaidya’s book: ‘Spitting on the Sun’) and argues that the issue of partition and 55 Crores to the Pakistan were mere pretexts, as much before these issues came to surface, attempts on Gandhi’s life were made in 1934, 1940 and 1944. The real reason for attacks on the Mahatma was that he was a great Hindu and he was the greatest opponent of Hindu nationalism. Hindu nationalists saw him as the big obstacle to their agenda of Hindu nation. Surely Hindu nationalists’ major act of violence was to kill the greatest Hindu of our time, Gandhi.

Godse who succeeded in killing Gandhi was a trained Paracharak of RSS, who joined the Pune branch of Hindu Mahasabah in 1938 and edited a newspaper called Agrani subtitled Hindu Rashtra. In his journal a cartoon was carried with Gandhi as Ravan with ten heads (two heads being Patel and Netaji Bose) slayer being Savarkar. After the murder of Gandhi, RSS was banned by the then Home minster Sardar Patel, who in his letter to Shyama Prasad Mukherjee of Hindu Mahsabha stated that it was due to the hate spread by Hindu Mahasabha and RSS; due to which Nation had to lose its father. The main accused of Gandhi murder Godse had many accomplices one of whom was Savarkar. He was let off due to lack of any corroborative evidence. Jeevanlal Kapoor Commission, which went into the whole issue pointed out, “All these facts taken together were destructive of any theory other than the conspiracy to murder by Savarkar and his group.”

Also as far as Godse’s membership of RSS is concerned we should note that at that time RSS did not have a written Constitution and membership register. One of the conditions for lifting the ban on RSS was that it will have written Constitution. In Court Godse denied that he was member of RSS. RSS people also denied that Godse was part of RSS. In contrast Nathuram’s brother Gopal, who was a co accused with him, wrote, “The appeasement policy followed by him (Gandhi) and imposed on all Congress governments’ encouraged the Muslim separatist tendencies that eventually created Pakistan. Technically and theoretically he (Nathuram) was a member (of RSS), but he stopped workings for it later. His statement in the court that he had left the RSS was to protect the RSS workers; who would be imprisoned following the murder. On the understanding that they (RSS workers) would benefit from his dissociating himself from the RSS, he gladly did it.”

In RSS, Savarkar is given the high place for nationalism. The whole Nationalism as asserted by RSS-Hindu Mahasabha is sectarian Hindu Nationalism, the parallel and opposite of Muslim Nationalism propounded by Muslim League. It was Savarkar who had apologized to British to get released from Andmans., and later propounded ‘two nation (Hindu and Muslim) theory’. This was to opposes the Indian nationalism, which was surging under the leadership of Gandhi led Congress. The present recreation of the dastardly act is a symbol of rise in assertion of RSS-BJP during last few years in particular.