Of Trolls and Anti-Trolls – and the Dissentious Muslim Identity Crisis

Opposing and trolling the Muslim (or Islamic) identity has always been the favorite entertainment of the Islamophobes, even before the advent of the social media. The only difference is that before social media, the expertise of trolling rested with a few political conduits, the impact of opposition and trolling was perhaps limited, and the mainstream masses did not pay much heed to such propaganda. Social media has given every Tom, Dick, and Harry the expert qualification to become a commentator on every aspect of the Muslim identity – be it physical, social, religious, or spiritual. The best of their qualifications comes out when the Muslim identity is pitted against the liberal or secular identity. Having names like Ashoka or Maurya may be fine, but how barbaric and regressive to name someone Taimur? And just how barbaric and regressive for A R Rahman to force his daughter to adorn the hijab? Well, it’s still barbaric even if it was the daughter’s personal choice, no?


Intolerance of the liberal brigade was on full display following this event in Mumbai  on February 5, 2019. It was 10-year celebration of Oscar-winning film Slumdog Millionaire and at the event, Rahman's daughter Khatija Rahman interviewed her father on stage. 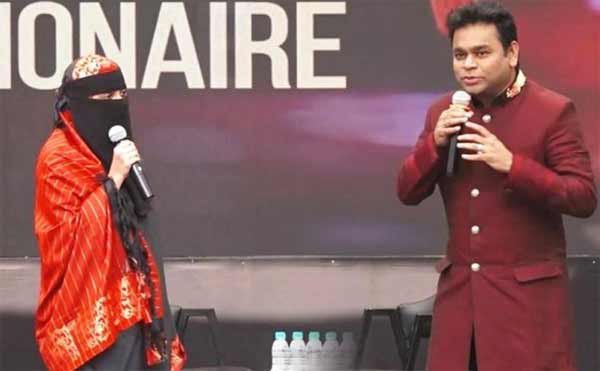 This is what the Islamophobic, liberalists, and secularist trolls did to Saif Ali Khan earlier and to A R Rahman now, unwittingly denying the freedom of choice to both. Their freedom of choice does not make much sense to these Islamophobic, liberalists, and secularist trolls, because it does not reflect “their choice”. Alternatively, it acts as a gullible cacophony of “despised” representation of the Muslim identity. Nobody from this bunch of trolls seems to care a bit when a student of Jamia Milia Islamia is stopped from giving the UGC-NET exam a few days back. Nor do they see anything wrong when Nedal Zoya, a highly qualified social worker (Masters in Social Work from Tata Institute of Social Sciences (TISS)), is denied a job because she wears the hijab as a matter of her personal choice. But this same bunch of Islamophobic, liberalists, and secularist trolls will go berserk indefending Sara Khan’s freedom of choice to wear a bikini and flash her pictures across the social media against the supposedly “fanatic and regressive” Muslim representatives. How progressive of them indeed!

Today, however, my dissention is not with these Islamophobic, liberalists, and secularist trolls. They are what they are, and shall remain that way always. My dissention today is with the representatives of the Muslim Indian community who seemingly attempt to outcry these Islamophobic, liberalists, and secularist trolls, but beget more damage to the Muslim identity in the process. Be it Javed Akhtar who involuntarily bashes the Mullas and wants them to implement gender justice for Muslim women at the backdrop of the Sabrimala Temple row; or Irrfan Khan who wants to replace fasting with self-introspection, and “sacrifice something close to you” instead of Qurbani on Eid-ul-Adha.

Javed sb alone knows what he means by “Muslim clergy learning something about gender justice from the board of Sabrimala temple”. Poor chap, maybe he never had any exposure to Islamic injunctions about women’s right to pray in Masjids. Someone please educate him that Islam has always allowed women the freedom to visit and offer prayers in Masjids and no Mulla or clergy or anyone from her household can stop them. I don’t want to argue much about Irrfan khan because he seems to be a muttonhead (maybe due to his extensive obsession with mutton!!), a nincompoop who is disillusioned with his own life which is lately bereft of any audacious publicity. Otherwise he would have known that Ramadan is indeed a month of “self-introspection” and that Eid-ul-Adha is indeed about sacrificing something close to you. Or does he expect to reincarnate the practice of human sacrifice, which was invalidated by the spiritual cognizance of Ibrahim AS sacrificing a goat instead of his son Ismael AS? Eid-ul-Adha is as much a celebration of the greatness of Ibrahim AS’s spirit of sacrifice as is it of the abolishment of the detestable and vile practice of human sacrifice – a malice that is much prevalent in India even today.

Unfortunately, it seems A R Rahman has also fallen prey to the same bandwagon of the likes of Javed Akhtar and Irrfan Khan – the dissentious anti-trolls who tend to justify one aspect of the Muslim identity by comparing it with a “non-identity”. A R Rahman has offered a befitting reply to his trolls by stating that his daughter Khadija adorns the hijab as her personal choice – fair and good. However, the moment he posts (and eventually boasts) about his other female family members who do not adorn hijab, it makes a severe dent on the Muslim identity of his hijabi daughter Khadija. By doing so, A R Rahman eventually and inadvertently aligns the non-hijabi identity of the other females of his family with that of an “acceptable” Muslim identity. Instead of defending Khadija’s choice of freedom and her Muslim identity, he eventually opens up the stage for trolls to moot their claims of regression – if other females of A R Rahman’s family can go without hijab – so that’s also an acceptable Muslim identity – why can’t Khadija also do the same? In summation – he seems to be promoting non-hijab identity of his other female family members rather than defending his daughter Khadija’s right to freedom of choice.

Though A R Rahman’s response may be seen as an innocent expression on his part – the perfect anti-troll to defend Khadija from the Islamophobic, liberalists, and secularist trolls – it smells of the grotesque and dissentious identity crisis that the Muslim Indians of today are faced with. This identity crisis besieges them to aptly align their identity with a “non-identity” that is apparently liberal, secular, and seems harmless to their being a Muslim. Millennial Muslim Indians are at the greatest risk of this identity crisis. They are the ones who would agree with Irrfan Khan to align themselves with vegans and animal rights activists in want of social and religious inclusion. They are the ones who would conform to Mohammad Kaif’s assertion that Surya Namaskar is a simple, innocent yoga pose. They are the ones who would even not shy away from upholding Sara Khan’s freedom of choice to wear a bikini when it comes to proving the “inclusiveness and progressiveness” of their Muslim identity.

Millennial Muslim Indians are also the ones who would vociferously demand a female Muslim Imam to comply with secular gender equality – but would never know that gender justice is bigger and better than simple gender equality. They would also be amongst those who demand that employers give vacation to female employees during their periods but would never acknowledge the uniqueness and distinction of Islam when it relieves them of the greatest duty of offering daily prayers during their periods. Imagine the embarrassment of a female Imam not coming to lead the daily prayers for those 5-7 days, and the entire Masjid and the neighborhood implicitly knowing the reason! Not recommending females for leading daily prayers may just be Allah Almighty’s form of gender justice of preventing and saving the females from this monthly embarrassment – but see what damage the Millennial Muslim Indians can do through their “innocent” but dissentious passion to align their Muslim identity with “non-identity” inclusiveness and progressiveness.