Prime Minister Narendra Modi’s communication strategy appears to have undergone a major change from what it was prior to his having stepped onto the political stage. It may be recalled, till 2001, prior to his taking over as Gujarat chief minister, his key task was promoting his party, BJP. An RSS activist from his younger days, the saffron brigade assigned Modi to BJP in 1985. Subsequently, in 1988, he was elected as organising secretary of BJP’s Gujarat unit. Since then, Modi faced only greater successes within his own party.  This was also the phase when BJP pursued Ayodhya-drive actively. On this front, Modi played an active role. This was marked by his organizing senior party leaders LK Advani’s Ayodhya Rath Yatra (1990) and Murli Manohar Joshi’s Ekta Yatra (1991-92).  In 1995, Modi’s electoral strategy was credited for BJP’s success in Gujarat assembly elections. Modi was a party secretary then. Modi was elected as BJP’s national secretary and transferred to New Delhi. Though he was entrusted with the responsibility for party activities in Haryana and Himachal Pradesh, his main concern remained Gujarat state politics. 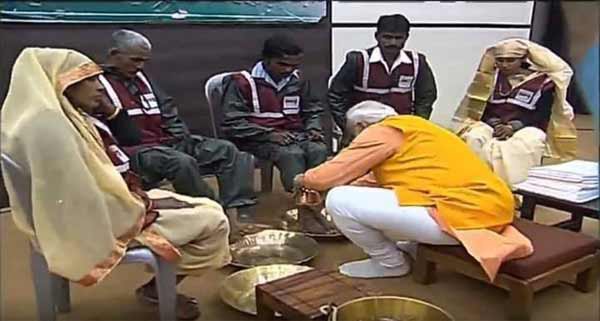 The low political profile kept by Modi during that period is in strong contrast to what it appears to be like now. Shrewd politics probably prompted him to remain in the backstage as BJP then was not devoid of strong leaders at the centre and also in his home state (Gujarat). If the centre-stage was dominated by Atal Bihari Vajpayee and LK Advani, Keshubhai Patel held the reins in Gujarat. Modi chose to move to the front (in Gujarat) only when Patel started facing criticism from several quarters for corruption, etc. Subsequently, Patel’s ill-health and failure of his political moves apparently created political opportunities desired by Modi. Though the former tried his luck at parting company with BJP and forming his own party, he remained deprived of success.

A similar pattern is visible in Modi’s decision to join electoral fray at the national level. From 2002 till 2014, he did not voice any inclination to contest parliamentary polls. As mentioned earlier, in the earlier phase of this period, the strength of noted BJP leaders could not be ignored. Besides, Vajpayee headed a BJP-led coalition (National Democratic Alliance- NDA) from March 19, 1998 to May 22, 2004. Vajpayee served as premier for 13 days in 1996 and for 13 months from 1998-99. He served as Member of Parliament for more than four decades, being elected ten times to Lok Sabha and twice to Rajya Sabha. This point is being specifically made to draw attention to Vajpayee enjoying a fairly strong base behind him at the national level, prior to his heading the country as the premier. Also, before he held office for the whole term, he displayed no qualms in taking a chance and trying his party’s luck, though as mentioned earlier, he did not succeed. The same is not suggestive of political strategy exercised by Modi when he chose to join the national electoral fray.

There is a view, had Gujarat carnage (2002) not taken place, Vajpayee-led NDA may have returned to power in 2004. From one angle, though Gujarat-carnage did not diminish Modi’s hold in this state, it certainly had a negative impact on his party’s image. In this context, then, prospects of his heading the country as premier around a decade later did not prevail at the time. Though Vajpayee announced his retirement from active politics in December 2005, Modi confined his political hold to his home state. Modi took the major plunge in 2014. It would not be wrong to state that Modi was not totally confident then also of either his or his party’s political success at the national level. This is reflected by his decision to contest from two constituencies. Also, his decision to don a secular mask for campaigning stands out. The situation is different now. Prospects of his “secular” mask having the appeal it had in 2014 have faded. Also, earlier, Modi decided his moves by weakness of his political rivals.

But, one term of Modi’s government appears to have contributed to great frenzy among his political rivals. The success of his communication strategy is likely to be now decided not by his own moves but that of his rivals’ electoral appeal, strategy and importance accorded to the latter by voters!