Fear is the key to win elections these days

To have a constitution like ours is a boon. One should try to know about marathon debates, involving exceptionally brilliant Indians having impeccable record of their concern for freedom and well being of the country, indulged in to arrive at a final draft which was adopted in 1950 as the Constitution of free India. No wonder that our Constitution starting with ‘WE, THE PEOPLE OF INDIA’ contains article 21 (Protection of Life and Personal Liberty) which says:

“No person shall be deprived of his life or personal liberty except according to procedure established by law”.

Our lawmakers take oath on this very constitution in their swearing-in ceremonies. As representatives of ‘We, The People,’ they must remain true to the oath taken in their public life. Now, when life of the citizens of India is being routinely extinguished through ‘mob lynching’ what right these public representatives have to remain in office? Being under oath to uphold the constitution they must leave no stone unturned in their efforts for immediate cessation of this obnoxious deprivation of lives, otherwise they would be considered as hypocrites paying just only lip service to uphold the Constitution. 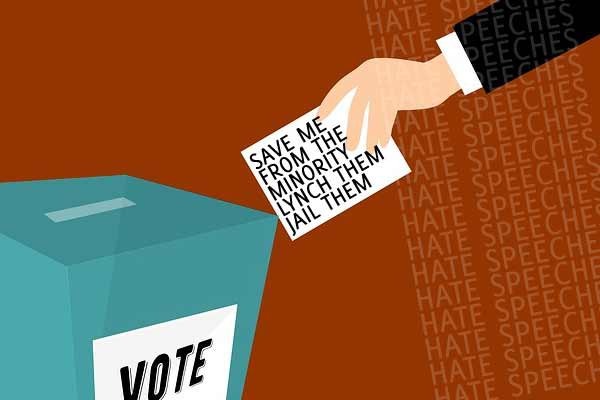 Let us try to analyze incidents of mob lynching where scores of people in the form of unruly nameless crowd take out their anger on some unfortunately trapped victim. They not only exhibit their misconceived bravery but publicize it on social media through well-planned videos. What makes these otherwise cowards so emboldened is the fact that they care two hoots for law-enforcing agencies. As opposed to condemnation of the horrible act and conviction of these cold-blooded murderers, law-makers are only facilitating them. It has taken years of sustained planning to create myths about Muslims being compulsorily non-vegetarian and even beef-eaters (buffalo meat is erroneouly called beef) to create an environment of extreme hatred against Muslims.

It is really strange that a particular political party while championing the cause of ‘Cow Protection’ in one part of the country, promises supply of good quality beef in another part. Cows and bulls munching on urban rubbish, which mainly consists of harmful polythene, is a common sight in our cities and towns. Stray cattle, mainly of the bovine family, have become a menace to growing crops and poor farmers are restrained to augment their income through cultivating cash crops. They are rather compelled to incur unnecessary expenditure to check this unprecedented menace of stray cattle through expensive fencing of their farmlands.

Why so-called ‘Cow Vigilantes’ have failed to take note of the pitiable condition of the abandoned cattle population? Why can’t they volunteer to take these hapless aged cattle (cow family) to their homes if they really love cows? They had no compunction in not only lynching human beings who were found transporting productive cows after proper purchase, but also snatching their property. Now, this mob lynching (or ideologically motivated murder) is not restricted to issues related to the ‘cow family’ but finds excuses to perpetuate the horrendous act on one pretext or other.

False propaganda about past Muslim rulers as being harsh on their Hindu subjects and historically incorrect discourse of battles fought between different rulers, be it Hindus or Muslims, have given rise to a false perception of Muslims being outsiders. When Babar invaded India he fought with Ibrahim Lodhi, a Muslim king. Similarly, strife between armies of Aurangzeb and Shivaji has been blown out of proportion. Many Muslims like Daryadarang, Ibrahim Khan etc were chiefs of different divisions of Shivaji’s army. All these strifes/battles were political in nature with territorial expansion being the only motive. Muslims rulers hardly bothered to alleviate the sufferings of their subjects belonging to a lower castes in the Hindu caste system and Muslim converts from those castes. They didn’t try to spread the teachings of Islam through abolising cruel practices like ‘untouchability’ or ‘Sati’.

A country only progresses when there is internal peace and harmony between communities. A well integrated society augurs well for the over-all development and all-round growth of the country. However, when winning elections becomes the sole aim then devious ways to win are of paramount importance. Polarization on religious lines, therefore, becomes the main driving force of the electoral campaigns. Hence presence of an enemy to create fear is necessitated. If there happens to be a neighbour country with inhabitants having same religion as the largest minority group within the country then seeds of hatred can easily be sowed. False propaganda of population growth among Muslims and thus a lurking threat to the majority Hindu population gets projected as future scenario. Constant maneuvering to instill doubt in the minds of Hindus vis-à-vis their Muslim neighbours ultimately results in rich electoral dividends. This in addition to subtle maneuvering of EVMs where EC didn’t even allow preferential counting of votes through VVPATs ensured win for a particular political dispensation. We should have healthy competition with a country of our stature like China but an obsession with Pakistan is only explicable through ill-conceived electoral strategy for political gains.

It has rightly been said that India lives in its villages and it is in our villages that the resilience of our secular fabric will be tested. Obviously, dent in this fabric has been created through whisper campaigns about Muslims being the cause of all evils: be it unemployment, population increase, cruelty to animals etc. However, one still hopes and prays for the toughness of our unique ‘secular fabric’ which reflects our ‘unity in diversity’. One sincerely hopes that inbuilt Indian qualities of togetherness, love and compassion will successfully overcome this falsely created ‘Fear Psychosis’.