Hong Kong: Efforts to rescue 2-year-old Sujith Wilson, trapped in a borewell for over three days in a village in Tiruchirappalli district of Tamilnadu now have entered fourth day. Rescue teams, including those from the National Disaster Response Force (NDRF) and Oil and Natural Gas Corporation of India (ONGC) have confirmed that Sujith has fainted but breathing. Sadly, Sujith had initially been trapped at around 26 feet inside the borewell, but failure of an effort to pull him out by tying his hands to ropes made him slip to 70 feet! Though the rescuers from multiple agencies are expressing confidence to rescue him alive, and the whole country is praying for his safe return, some questions about these borewells, the new killing fields of children of India must be asked. 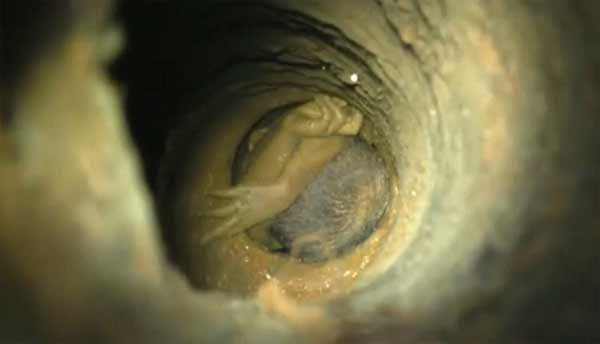 Sujith as seen deep inside the borewell.

To start with, the borewells are almost always private and illegal. They are dug flouting all the norms and guidelines issued by the Supreme Court of India—for water, in the face of increasing depletion of groundwater. And they keep killing children across the country. Also, it is not that anyone- people, government or even judiciary are unaware of the problem. . They are not since the whole country, at least its middle class segment, remained glued to their television sets watching live coverage of the dramatic rescue of then 5-year-old Prince Kumar Kashyap’s from a similar borewell in Kuruksheta of Haryana in September 2006.

Such deaths had made the Supreme Court intervene and issue guidelines to prevent such incidents way back in 2010. The guidelines issued by the Court (via Writ Petition (C) NO. 36 of 2009) required mandatory written permission for the landowners from the authorities for digging such bore wells. They also asked for mandatory registration of all drilling agencies, making the digging area secured with signboards and barriers around the drilling site, constructing concrete platforms around the well casing, capping of well by welding steel plates and, and perhaps most importantly, filling up of all the unused bore wells as they are often the worst offenders.

Clearly, nothing much has changed even a full 9 years after the guidelines. Neither is Sujith the first child to fall in a borewell in 2019. India has witnessed at least six such reported and widely covered cases this year alone. To recount them, 2 year old Fatehvir Singh, rescued out of a borewell after over 110 hours in Sangrur of Punjab this June, died soon after his rescue. Similarly unfortunate was four-year-old Seema, who died trapped at 260 feet in a 440-feet deep borewellin Melana village of Jodhpur in Rajasthan this May. Five years old Praveen who fell in a borewell in Agaryala village of Mathura district in April and Roshan of Umaria village of Dewas in Madhya Pradesh this March were luckier to get rescued though.

Most heart wrenching case though is that of Seema of Rashidpur village in Farrukhabad district of Uttar Pradesh. She died trapped in a borewell this April after operation to rescue her was called off as the digging had caused serious cracks in six nearby houses and experts feared that they could cave in if the heart wrenching decision was not taken!

Incidentally, these incidents cause outrage, if covered live by national media. Those in faraway villages not easily reachable for ‘national’ media based basically, and only, in metropolitan cities including state capitals mostly don’t even make it to the state capitals. They remain stuck in inside pages of local newspapers. Then the people forget about them both as ‘one off accident’, till the next one covered on national media at least.

No one seems to be bothered about asking what action was taken against the person/s who dug the borewell flouting Supreme Court guidelines. Neither do people ask about fixing command responsibility and punishing the authorities duty-bound to implement the Supreme Court guidelines for failing to do so. It goes on as business as usual. And the children keep falling in them and turning into statistics. Rather, they do not turn even into statistics as borewell deaths are not recorded under any separate heading. They are clubbed into the broader category of accidental deaths of the children.

In a way that is very similar to the deaths caused by potholes on Indian road. They actually kill many times more Indians per year than terror does- they killed over 9300 and injured 25,000 in three years between 2015 to 2017. Then the data about pothole deaths stopped coming by, along with all other data of the National Crime Records Bureau. Quite an ingenious way to curb reporting and inquiry, one must note.

Let us pray for Sujith and pray that he doesn’t become one and is rescued safely. And then ask these questions to the authorities and demand action to save those little souls. And ask for some action on potholes too. (Asian Human Rights Commission)

The author Avinash Pandey, alias Samar is Programme Coordinator, Right to Food Programme, AHRC. He can be contacted at avinash.pandey@ahrc.asia.