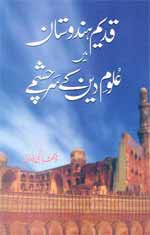 B book: Qadeem Hindustan mein Ulum-e-Deen ke Sarchashme / Fountains of Religious Education in Ancient India
Author: Dr. Rahi Fidai
English Version: Dr ‘Abdul Ghaffar Khan
Publisher: Iqra Publications, No. 21, Oosman Street, III Cross, Haneefia Masjid Road, Khush Hal Nagar, K.G. Halli, Bangalore 560045 - Mob: 09448166536
Year: 2009 Price: Rs. 150 / Pages: (68 Urdu+72 English in single volume)     ISBN: 978-93-80124-05-06                 While the Union Government is all set to constitute a Central Madrasa Board and decriers of Madrasa education are raising a hue and cry for modernising them and political zealots are crying hoarse in declaring them as dens of terrorists; it is time to ponder over the significant contributions of these institutions which have been serving the community for more than a millennium. Rahi Fidai, a reputed poet of Urdu as well as an eminent muallim and a former member of the Madrasa University Senate, tries to justify the relevance of their presence land their syllabus.

Shamsur Rahman Faruqi in his Foreward cites Shibli Nu’mani (1857-1914) who was the first in the colonial India to emphasise the role of Islam to the advancement of knowledge in the world specially in the pre-modern times. He reminds by citing George Makdisi: “the structure and pattern of university education in the West and even the cap and gown of graduates and doctors was modelled on the great Madrasa of Baghdad established by the Abbasids”. He draws attention to the fact that George Sarton’s encyclopaedic and magisterial introduction to the History of Science emphatically established Islam’s contribution to world sciences. A continuity from the Greeks to medieval Islam in the first volume entitled From Homer to Omar Khayyam.

Present day Muslim “intellectuals” who have been brought up in the convent culture and who see Islam through “the light of the English Lantern” earn Rahi Fidai’s indignation for their myopia. This monograph, according to the author, was prompted “as a reply to distorted views and misconstrued opinions”. He categorically declares: As long as Muslims shall walk on the face of the globe their religious and spiritual upliftment share remain the most coveted choice of the Ulama - these institutions shall never cease to discharge their onerous responsibility.”

In his Preface he laments the wide gulf between demand and supply of religious scholars. Taking a statistical analysis of Muslim population vis-à-vis the number of professionals needed at as low as 10% he finds that we shall not be able to boast of 20 lakh religious alumni to sustain the religious enlightenment of the community. Unfortunately our madaris are not in a position to cater to the need of the community and there shall soon be a vacuum. Western oriented Indian intellectuals quite frequently attribute all the maladies of the community to rigorous Islamic preaching. They are oblivious of the fact that the Jews (as a community) give highest priority to religious education. They ensure that all the male children from age two to ten receive rigorous religious orientation and no formal schooling. After ten the brightest are reserved exclusively for religious education and mediocres are allowed to pursue careers in schools and colleges.

Rejecting the outcry of “modernisation” he points out that through the millennium the madaris have been alive to the needs of changing circumstances and adopting their syllabi accordingly. He enumerates as many as 23 disciplines - religious as well as secular - covering a very wide spectrum of knowledge which includes philosophy, logic, literature, geography in addition to specific disciplines of Qur’anic studies such as syntax, lexicography, etymology. No wonder that such a syllabus produced versatile genius specialising in several disciplines. Ibn Sina, Ibn Rushd and Omar Khayyam were the products of this system and they excelled not only in theology but also in medicine, mathematics, philosophy, astronomy and music. He asserts that madrasa education has an inbuilt mechanism for modernisation which does not divide knowledge into water tight compartments of religious versus secular.

Tracing the history of religious education he says that the Prophet (SAWS) was its informal mentor. Even prior to his hijrat he had sent Hadharat Mus’ab bin ‘Umair (RA) to Medinah. After his migration suffah became the first seat of learning from where rose theologians like Hadhrat ‘Abdullah bin Mas’ud (RA), Hadhrat Abu Hurairah (RA) and Hadharat Salman Farsi (RA) and many more who guided the tabiyeen who taught the taba tabiyeen.

Citing Shibli Nu’mani he regards Madrasa Baihaqiah of Nishapur as the first modern Madrasa of Aalam-e-Islam where Imam Ghazalli’s teacher Imam-ul-Harmain (‘Abdul Malik bin Imam ‘Abdullah Juwaini Nishapuri) (419-478 AH) received his education. He points out that much before its existence there were scores of prominent madaris at Nishapur.

The author points out that the coastal areas of South-Malabar (north Kerala) received the first group of Muslim traders. When they settled in this region they established mosque and also madaris (known as pallis in Malayalam). He cites Farishta, Dr. Muhammad Ali Athar and Ibn Battuta to substantiate his argument. So far as North India is concerned he informs us that with Muhammad bin Qasim’s conquest of Sindh two cities Mahfuzah and Mansoora came into existence. These cities, obviously, had mosques as well as madaris attached to them. 150 years after Mahmud Ghazani’s conquest Shihabuddin Ghouri conquered Ajmer in 587 AH where mosques and madaris were established. His commander Qutub-ud-din Aibak established a madrasa in fond memory of his patron Sultan Mu’yiz-ud-din Muhammad (Shihabuddin) i.e. the Mu’yizzah Madrasa adjacent to Qutub Minar and the Quwwat-ul-Islam mosque in 627 AH.

He regards the first modern Islamic University to be the one established by the renowned intellectual of the period Imad-ud-din Mahmud Gawan (d 886 AH), who was Prime Minister of Sultan Muhammad Shah Bahmani (d. 887 AH), at Bidar, in 876 AH. This university prospered till Alamgir’s reign. On 11th Ramdhan 1108 AH during the night of Thursday torrential rains accompanied with lightning destroyed the mosque where people had been offering taraweeh prayer. When the debris were removed rescuers found the Imam-ul-Mudarrisin in the state of qa’yidah with his index finger raised celebrating the unique greatness of Allah!

In the next 30 pages the author surveys prominent, madaris of the country (with short notes on each) which have been in existence for the last fifty years (at least). He concludes his monograph with an impressive bibliography of 40 references to establish his reputation as a sincere and painstaking scholar.

With an attractive cover with photographs of Qutub Minar and ruins of Quwwat-ul-Islam mosque on the front cover and Mahmud Gawan’s madrasa on the back cover the book is moderately priced at Rs 150. It is a ready reference text for scholars who have genuine love for madrasa education or education of Muslims. The entire cost of production was borne by the author. (It cost him his job too as he earned the ire of the management for undertaking the project without prior approval.)