Rejoinders / Letters to the Editor 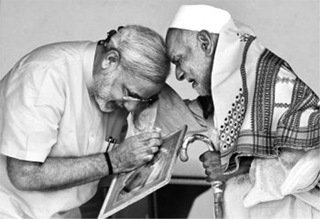 Mr. Ghulam Muhammad Gulamhusain Momin, relative of a martyr of the Mahagurajat Movement, breaks down as he is felicitated by Gujarat Chief, Minister Narendra Modi in Ahmadabad. In this context, it is my opinion that it would have been better, had Mr. Momin not accepted felicitation by the hands of Gujarat’s CM Modi, as his hands are soaked with blood of thousands of innocent Muslims. Such photographs published prominently in media creates his pro-Muslims image, which is otherwise wrong. Mr. Momin could have accepted his felicitation by the hands of honourable Governor of Gujarat of by the hands of Chief Secretary to the Govt. of Gujarat and by registered post, instead. Mr. Momin, shame on you. We, the suffers of Gujarat genocide 2002 strongly condemn you. Farooq A. Gaffar Bawani, Rajkot, Gujarat   Terrorism redefined after Col. Purohit and Sadhvi The inglorious Nazi strategy carried out to wipe out democracy and replace it with fascism does have a less-discussed affinity with the Hindutva strategy chalked out to convert India into a ‘Hindu Nation’. From Nathuram Godse, the assassin of Mahatma Gandhi, to Abhinav Bharat-RSS members arrested in connection with Ajmer Dargah blast early this month, have chosen the way shown by Hitler and Mussolini to accomplish their goals. Joseph Goebbels, Hitler’s closest aide and the Minister of Propaganda, has inspired Brahmin-dominated media which shamelessly lip-sync the police rant against Muslims. More than 15 prominent bomb blasts carried out by ultra right wing Hindutva outfits across the country from the 2003 blast in Muhammadiya Masjid, Marathwada, Maharashtra to the 2009 blast in Margao, Goa acknowledge the threat of Hindutva terrorism pose to the nation. The media and investigative agencies have long hushed up the truth and accused Muslim terrorists for the various blasts taken place across the country at different times. However, the arrest of Malegaon blast perpetrators, Col. Purohit and Pragya sadhvi, paved the way for a turnaround. Now, the latest developments in Ajmer blast investigation expose the knotty web of Hindu terror organizations which have spread across the country and are alleged to have connections with some naxal groups. Mohammad Ziyaullah Khan, Nagpur writeziya@gmail.com   Ban on IM The real face of Congress is once again in front of country. This is unique type of ban. There is no office, no office bearers & no monetary resources. It is not clear what compelled the government to ban. Nobody has claimed to be its member except an American who did e-mail before Ahmadabad serial blasts. “All the Muslims are not terrorists but all terrorist are Muslims” this statement was given by the Prime Minister in waiting. That is proved layer to layer wrong. This is a serious ignorance of facts telling why casually American aggression happens at many places in the world killing innocent people. Killing of innocent Palestinians by Israel and what happened in Orissa and Karnataka was seen on television by the whole world. About eleven people were arrested from Nepal for Bombay Local Train Blast for the same case other people from Azamgarh were arrested and charge of mastermind is most convenient tool to harass the minorities’. Government of Maharashtra is putting an opaque glass and is never able to see the activity of Manse, Shiv Sena, Sanatan Sanstha, Abhinav Bharat and the like minded gangs of Hindutva. The story of Malegaon, Ajmer, Goa, Makka Masjid and Samjhauta Express blasts is lighter changed or rapidly changing and if investigation is conducted honestly the real culprits of all the blasts in country can be booked and innocents may be honourably acquitted. There is serious question mark over Government intension of Mr. Abdul Rahman Antulay whose voice was suppressed in a democratic country. Nobody knows why an American sent e-mail before Ahmadabad serial blast, was smoothly managed to let out of country. In place of that American Tauquir alias Subhani was freshly implicated then cleverly shifted to Mansur Pirboy (Pirbhai) because probable former did not know computer handling audit was difficult to cook the story for police and paramilitary forces. Naxallites killing force and persons will not come in the category of terrorism because of oblivious reasons. Rather than they are welcome to open dialogue. The present government has hurriedly banned and imaginary organisation with malicious intention to malign a particular section of society gaining numerical electoral superiority and last but not the least diverting attention of country for those serious problems and making already suppressed people more defensive and humiliated. Dr. Javed Akhtar, AMWELA, Azamgarh, U.P. The Al Qua´eeda possible connection to that flotilla A solution for people “who cannot wait “ or “people with a right to priority”

Immediately, after the attack on the Humanitarian-flotilla to Gaza all the Israeli Media and all spokesmen and women insisted that: “those activists are connected to Al Qa’eeda....” unquote
Since then, came a big and a total silence on that accusation. Sherlock Hommos, private detective has done a thorough investigation and came up with the following results :
Those Peace-activists and Al Qua´eeda have never had any connections nor any direct contacts..... whatsoever....!!
Nevertheless, and to be very objective and very precise one leading Al Qua’eeda figure, has once used the same public- toilets as did the cousin of that Ship’s captain.
Of course, they both did not use those toilets, at the same time, but there was an interval of only 12 hours.
The US-Home-land-security is studying this fact and shall issue, soon, some new directives for CIA, the FBI and to the Kentuky Fried Chicken (KFC).
In the meantime , all Peace-activist are to check-out who used any toilets ahead of them...... In order not to compromise the values of Peace-activism with the vertues of Peace-extremism. Eng. Moustafa Roosenbloom (Spokesman for Sherlock Hommos)
(via email)

More from Rejoinders / Letters to the Editor