Pakistan's self-exiled leader Altaf Hussain was arrested on Tuesday (June 11)  from his residence in London. He was arrested in an early morning raid by a team of the Scotland Yard. 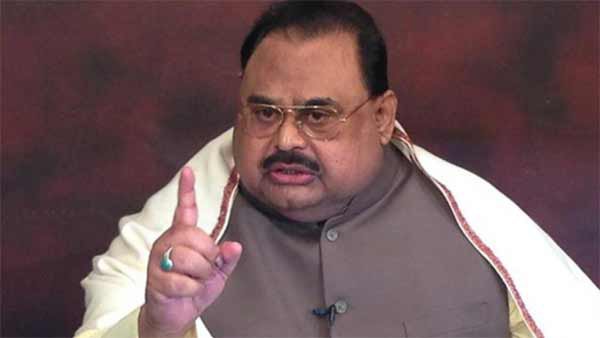 The arrest has sent shockwaves across Pakistan as Hussain once ruled Karachi, the country's commercial capital, with an iron fist, shutting down the entire city in mere seconds with the help of his loyal workers, Anadolu News Agency said.

Hussain, who is wanted by Pakistani security forces in multiple cases relating to murder, terrorism, inciting violence, and money laundering, has been shifted to a police station in London.

He is also facing inquiries for money laundering and delivering a hate speech to his supporters via telephone after the 2013 general elections.

Pakistan's Federal Investigation Authority has sent an extradition request to the U.K. government for Hussain.

Although it did not name Altaf  Hussain in its statement, London's Metropolitan Police said it had arrested a man in his 60s "on suspicion of intentionally encouraging or assisting offences contrary to Section 44 of the Serious Crime Act 2007," and "in connection with an investigation into a number of speeches made by an individual associated with the Muttahida Qaumi Movement in Pakistan."

According to the London Metropolitan Police, Altaf Hussain has been arrested "on suspicion of intentionally encouraging or assisting offences" under the UK's Serious Crime Act, 2007, though the statement also explicitly mentions Hussain's speech of August 2016, and that the department investigating him is the Met's Counter Terrorism Command.

What remains to be seen is whether the case will be widened during the course of investigation, as well as factor in the rest of Pakistan's many charges.

Hussain, who has been living in exile for more than 25 years, leads the Muttahida Qaumi Movement (MQM), a party influential in urban areas of Pakistan's southern province of Sindh, including its restive port city of Karachi.

Hussain's party was splintered in two factions in 2016 after a series of anti-Pakistan and anti-military speeches. His loyalists formed the London faction, while dissidents are based in Pakistan.

The MQM, which claims to represent the Urdu-speaking migrants who moved to Pakistan with the partition of India in 1947, has often been accused of being involved in violence, with Hussain at the helm.

His party is linked to a carnage in Karachi on May 12, 2007 which killed over 50 people on the occasion of a lawyers rally to welcome then deposed Chief Justice of the Supreme Court Iftikhar Chaudhry. Hussain is also accused of masterminding the murder of his close aide and the party's former secretary-general Imran Farooq, who was stabbed to death in 2010 in London.

The party had managed to win majority seats in elections from Karachi -- the country's commercial capital -- from 1988 to 2013, however it conceded a huge blow in the 2018 elections at the hands of Prime Minister Imran Khan's Pakistan Tehreek-e-Insaf Party.

“Altaf Hussain's arrest: Final nail in his political career?”was the title of a lengthy comment of daily Dawn.

Altaf Hussain loyalists are caught between a rock and a hard place. Most of them have either joined the anti-Altaf Hussain Pak Sarzameen Party (PSP) to save their skins, or they keep a low profile to avoid arrests. It's unlikely that the situation will be favourable for them.

At the moment, Altaf's arrest has strengthened the PTI's stance. The MQM-P, on the other hand, may find itself in a difficult position: either they speak out against the treatment meted to Altaf, or remain silent.

Altaf's influence has diminished over the past few years. This was obviously one of the major goals of the Karachi operation, but he also did himself and the MQM no favors by not listening to those around him and delivering those speeches, that too in such a heavily securitized environment. I believe at the moment his influence is limited to his loyalists who are only able to pass on his messages behind closed doors.

Opposition Leader in the Punjab Assembly Hamza Shehbaz’s interim bail was rejected by the Lahore High Court in the Ramzan Sugar Mills case and assets beyond means sources of income cases.

Hamza, along with his father Opposition Leader in National Assembly, Shehbaz Sharif, were indicted in the Ramzan Sugar Mills case on April 9.

This comes a day after former president Asif Ali Zardari was arrested in Islamabad after the high court cancelled his bail in amoney laundering case.