American Muslims 18 years after 9/11: The good and bad

18 years after the ghastly tragedy of 9/11, the seven-million strong American Muslim community remains at the receiving end with President Trump’s demonization of Muslims to bigotry, to hate crimes, to widespread discrimination, to media coverage that links Islam with terrorism. 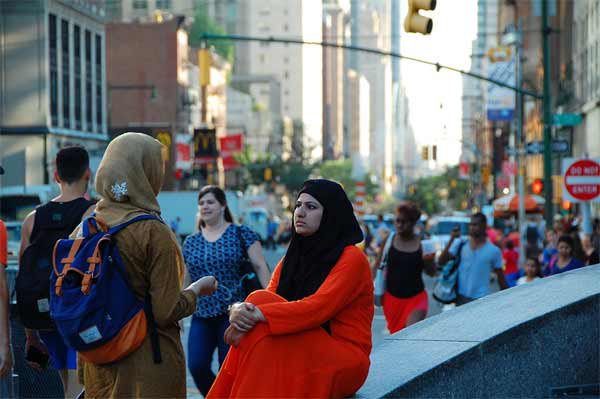 Tellingly, attack on Muslims and their faith is coming from our top political leadership. I mean from our President. Yes, our President Donald Trump.

On July 14, President Trump sent three racist tweets against four Democrat congresswomen saying  “go back and help fix” the countries he said they “originally came” from before trying to make legislative changes in the USA.Two of the congresswomen were Muslim, Rep. Rashida Tlaib of Michigan and Rep. Ilham Omar of Minnesota. The other two Alexandria Ocasio-Cortez of New York and Ayanna Pressley of Massachusetts are of African-American background.

President Trump at a campaign rally on July 18 doubled down on his racist remarks about the four progressive congresswomen of color, casting them as an existential threat to modern American society and saying "let them leave."  As he took direct aim at Democratic Rep. Ilhan Omar, a defiant Mr. Trump was buoyed by the raucous crowd, which chanted "send her back!"

The president claimed that the four Democratic congresswomen "originally came" from foreign countries but only Omar was born outside the U.S. Pressley, an African American, was born in Ohio. Ocasio-Cortez, of Puerto Rican heritage, was born in New York. Tlaib, the daughter of Palestinian immigrants, was born in Detroit. Omar, a naturalized U.S. citizen, was born in Somalia, a country she and her family fled from because of a civil war and ethnic strife.

The Democrats-led US House of Representatives formally condemned President Donald Trump’s Twitter posts as racist. The House vote was split largely along party lines despite pressure for Republicans to denounce the president’s attacks on four Democratic Congresswomen. The vote, 240-187, fell nearly entirely along party lines with only four Republicans voting with Democrats.  A USA Today/Ipsos survey found that nearly sixty per cent of Republicans agreed with the President’s racist tweets.

Discrimination against Muslims and hate crimes

Abbas Barzegar, national research and advocacy director at the Council on American-Islamic Relations (CAIR) told The Daily Beast in May: “We’ve already reported over 500 incidences of anti-Muslim bias or harassment just this year so far.” “That’s very preliminary reporting. I know a number of our chapters have not filed their reports yet… I believe that’s a very low estimate already of what’s happening across the country.”

Amid Trump’s Islamophobic and racist rhetoric Pew Research Center reported sharp rise in discrimination against Muslims. According to the Pews Survey released in April, Muslims, in particular, are seen as facing more discrimination than other groups in society.

On the other hand, Washington-based Institute for Social Policy and Understanding (ISPU) annual poll also found that Muslims remain the most likely group to report experiencing religious discrimination.

At the same the Muslim community remains victim of bigotry and hate crimes. Few examples:

Hate Crimes against hijab wearing Muslim women is very common. In Februarya man spit on a woman wearing a hijab in Long Island City. A Woman wearing hijab was pepper sprayed in faceon 4th of Julyin Kandiyohi County (Minnesota). In January, a Muslim woman from Oklahoma said an attacker pulled her hijab and told her to “go back to [her] country”

A billboard advertising an Islamic art exhibit at the Philbrook Museum of Art in Tulsa (Oklahoma)was vandalized. The billboard featured a piece of ceramic pottery and text that read, "1,200 years of Islamic Art." Someone wrote "HOME GROWN TERROR!" in black spray paint on the billboard and the one below it.

William Patrick Syring, 61, of Arlington, Virginia, was sentenced in August to 60 months in prison for threatening Dr. James J. Zogby presidentof the Arab American Institute (AAI) and other AAI employees because of their race and national origin, and because of their efforts to encourage Arab Americans to participate in political and civic life in the United States.

In the Islamophobic environment attacks on mosques are not uncommon.

Perhaps in the first attack on a mosque in the USA directly linked to the massacre of worshippers in Christchurch, New Zealand on March 15, a mosque in the Southern California city of Escondido was briefly lit on fire on March 24 in an apparent arson attempt. The blaze was extinguished by members of the Islamic Center of Escondido, and no one was injured.The suspect in an arson attack left behind graffiti referencing the deadly attacks of New Zealand killing 51 worshipper.

In May, there was an arson attack on the Turkish Mosque in the city of New Haven, Connecticut.
Turkish officials said the fire started at the mosque's entrance and reached the third floor through the exterior side of the building. "There was no loss of life or injury in the fire, but it is determined that the mosque has suffered large-scale damage.”

In May also, a Queens, New York, man was indicted on hate crime charges for allegedly trashing a mosque during an anti-Muslim tirade. And a Florida man was arrested for allegedly targeting a mosque and threatening to kill Muslims.

In January, two men have pleaded guilty in federal court to bombing a Minnesota mosque and attempting to bomb a women’s health clinic in Illinois. Prosecutors say the two men and another man accused in the case were part of an Illinois militia group that called itself  “White Rabbits.” The U.S. Justice Department last year charged Michael McWhorter, Joe Morris and a third man, Michael Hari, with using an explosive device to damage the Dar Al-Farooq Islamic Center in Bloomington, Minn., in 2017.

Bigotry against Muslims is now pervasive and considered normal in the US society.Tennessee’s Coffee County District Attorney Craig Northcottposts a series of anti-Muslimcomments on Facebook. In his Facebook posts, Northcott stated: Islam is an evil belief system.

The Sussex County (New Jersey) Republican Committee ran a Twitter page filled with offensive comments including a call to "eradicate Islam from every town, city, county and state in our homeland." The Twitter account includes retweets of memes with hateful language about Muslims and specifically about Muslim Reps. Ilhan Omar and Rashida Tlaib, calling them in one case "the enemy within."

"Islam is a growing threat in the United States of America," said Pastor Dr. Donald McKay, head minister at Bloomfield Hills Baptist Church, Michigan. It was written on the flier for an event on Sept 11 and 12. "I am an Islamophobe, I wear that badge proudly," he said adding: "We don't hate Muslims, we hate the ideology they are identified with." "We believe that Muslims, committed Muslims, that are familiar with their faith are committed really to the overthrown of the United States and to world domination," McKay said.

American philanthropic organizations, including mainstream foundations, have funneled tens of millions of tax-free dollars to anti-Muslim groups influencing public opinion and government policy all the way up to the White House, the nation's largest Muslim civil rights group said in a report in May.

In a report called Hijacked by Hate: American Philanthropy and the Islamophobia Network, the Council on American-Islamic Relations (CAIR) documented how 1,006 charitable foundations provided nearly $125 million to 39 anti-Muslim groups between 2014 and 2016, the dates of the latest publicly available tax filings.

On the positive note

California judge vacates conviction in 13-year-old Lodi terror case of Hamid Hayat: In a stunning decision in July, the Senior United States District Judge Garland Burrell Jr., who oversaw the trial and conviction of accused Lodi terror suspect Hamid Hayat 13 years ago in 2006 has ordered the conviction and sentence vacated. Burrell’s decision comes seven months after U.S. Magistrate Judge Deborah Barnes issued a 116-page recommendation to Burrell that the conviction be vacated because of ineffective representation by his original defense attorney, a woman who at the time had never tried a criminal case in federal court. Barnes’ recommendation followed weeks of testimony in a 2018 hearing in which his attorney hammered home his contention that the FBI had coerced Hayat into false confessions, that the training camp he supposedly visited was not even open at the time he was in Pakistan and that alibi witnesses who could prove his innocence were not produced at the original trial.

Hayat had been accused of attending a terrorist training camp in Pakistan and planning to wage jihad on the United States. Hayat, who was born in San Joaquin County in 1982, had visited Pakistan with his family in 2003 on what his lawyers say was a trip for his mother to receive medical treatment and to find a wife for him. But Hayat had come to the attention of a paid government informant who can be heard on wiretaps urging Hayat to attend such a camp. His appellate lawyers say that despite his confession – which came after hours of questioning by the FBI and is now the subject of a Netflix documentary – he never went to a camp. They also say the one he was alleged to have attended was not open at the time he was in Pakistan.

The case made national headlines when federal officials announced they had broken up an al-Qaida cell in Lodi, where at one point agents suspected Osama bin Laden’s No. 2 man – Ayman al-Zawahiri – supposedly had been seen. Hayat’s defense team dismissed that notion as a fantasy created by the informant, but federal prosecutors have fought for years to keep Hayat’s conviction from being overturned, noting repeatedly that he confessed.

On Sept 4, a federal judge ruled that an FBI watch list of more than 1 million “known or suspected terrorists” violates the constitutional rights of U.S. citizens in the database. The decision from U.S. District Judge Anthony J. Trenga of the Eastern District of Virginia in favor of 23 Muslim Americans who sued over their inclusion in the Terrorist Screening Database found that the watch list infringes on their constitutional right to due process.

Trenga noted that the list restricts their ability to fly and engage in everyday activities and backed the plaintiffs’ concerns that they were flagged secretly and without a clear methodology.

“An individual’s placement into the [watch list] does not require any evidence that the person engaged in criminal activity, committed a crime, or will commit a crime in the future,” the judge wrote, “and individuals who have been acquitted of a terrorism-related crime may still be listed.”

The  Washington Post said the ruling could reshape the government’s process for a watch list that has long been criticized for inaccuracy and described by opponents as “a Muslim registry created in the wake of the widespread Islamophobia of the early 2000s.”

The watch list encompasses nearly 1.2 million people, including about 4,600 U.S. citizens or residents, as of June 2017.