The Milli Gazette Online 08 Nov 2019
“Ritual Vessels and Musical Instruments of Ancient China: A Special Exhibition of Cultural Relics from Hubei Province” is to be opened at the National Museum, New Delhi of India

On April 27, 2018, Chinese President Xi Jinping and Indian Prime Minister Narendra Modi held an informal meeting in Wuhan, Hubei Province, and visited an exhibition of cultural relics at Hubei Provincial Museum. This exhibition is jointly held by Hubei Provincial Museum, China and the National Museum of New Delhi, India to implement the spirit of the meeting of the leaders of the two countries, strengthen mutual understanding of the two peoples and promote mutual learning between the two civilizations.

Located at the middle reaches of the Yangtze River, Hubei belonged to the State of Chu in ancient times. As Chinese President Xi Jinping noted at the informal meeting with Indian Prime Minister at Hubei Provincial Museum on April 27, 2018, “Chu culture is an important part of the time-honored Chinese civilization and occupies a very important position during the development of the Chinese civilization.” 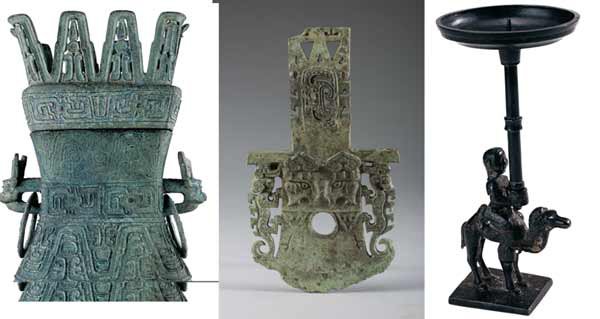 During the Xia, Shang and Zhou dynasties (from the 21st century BCE to 221 BCE), highly-developed bronze casting technologies emerged in China and gave birth to brilliant arts. The shapes, combination and use pattern of bronzes are closely related to the ritual system and become the most important material carrier of the system. A large number of exquisite bronzes from Shang and Zhou dynasties have been unearthed in Hubei. They are outstanding representatives of ancient Chinese bronzes. The exhibition will showcase over 100 cultural relics collected in Hubei Provincial Museum, most of which are unearthed bronzes, for the purpose of presenting the splendidness of ancient Chinese rituals and bronze arts to Indian visitors.

Amongst the exhibits there are not only the post-Shijiahe jade sculpture that represents the dawn of the late Neolithic period, but also the bronzes unearthed from the Panlongcheng Site that represents the bronze civilization of the Shang Dynasty in the Jianghan Region. The bronzes of the early period of the Western Zhou Dynasty unearthed from the Yejiashan Site, which represent the latest archaeological achievements of Hubei Province, will also be shown at the exhibition. It is the first time for the Yejiashan bronzes to be exhibited in a foreign country. Besides, significant archaeological discoveries at Jiuliandun Tombs and the Tomb of Marquis Yi of the State Zeng will be on show at the exhibition to completely show bronze types and rituals of the Zhou Dynasty.

Chinese President Xi Jinping has said that “both China and India are countries with a splendid history and culture, and there are many similarities between cultures of the two countries. China and India should conduct exchanges in wider areas and at a deeper level, commit themselves to the revival of Eastern civilizations, advocate the respect for diversity of civilizations and promote harmonious coexistence of different civilizations.” We hope that the exquisite cultural relics can help the Indian people to gain a better understanding of the history and culture of Hubei Province and promote the friendly relations between China and India.