LONDON (21 December 2019): The successful anti-CAA and anti-NRC protest—jointly organised by AMU and Jamia alumni at Parliament Square, right under the statue of Mahatma Gandhi, Saturday—would not only be a big surprise for anyone who is aware of the culture of the organisations of old students of these two great institutions around the world but would also serve as a proof of simmering anger among international Indian diaspora, specially Muslims, against Modi-Shah folly and BJP’s fascism. 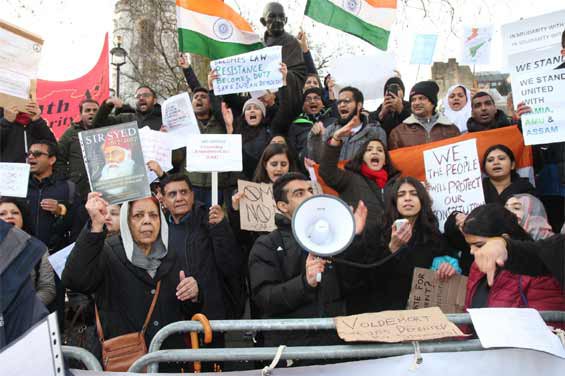 Despite very strong political ideologies and political movements behind the establishment of AMU and Jamia, their alumni associations, surprisingly, remain timidly cautious and refrain from participating in or commenting on anything that may sound to be even remotely political.

However, today not only did they come out in large numbers to register their anger and disapproval of BJP’s fascist policies, they stood in pouring rain for more than two hours holding placards with angry messages and chanting current-pan-Indian-slogans of Azadi and Inquilab along with other anti-BJP, anti-Hindutva, anti-casteism slogans.

Because of the fact that Jamia happens to be situated in the capital, Delhi, Modi Government has failed to stop the streaming of information of police atrocities on students there. However, as reports are starting to come from AMU it looks that the level of cruelty meted out on students was far graver than in Jamia.

From lots of updates on the Boycott NRC movement and photos/videos from around the world visit : https://www.facebook.com/BoycottNRC/