London (25 January 2020): Except that there was no Delhi police to harass and intimidate the protesters, the vicinity of Downing Street—where the official residence of British Prime Minister is— today briefly presented the scene of Delhi’s Shaheen Bagh where hundreds of diaspora Indians representing various faiths and ethnicities assembled to march to the Indian High Commission to protest against the ignoble CAA and NRC. 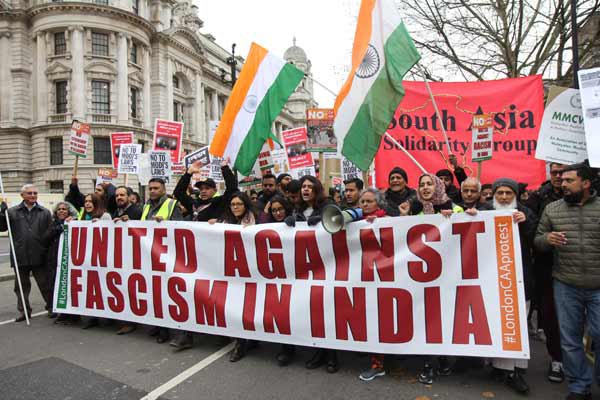 Holding India’s tricolour and placards and chanting slogans, they marched to India House through London’s iconic Trafalgar Square. As the march reached India House, the contained anger of the protesters expressed itself in more vigorous chants of anti-Hindutva and anti-BJP slogans.

The marchers read and repeated the preamble of the Indian Constitution and dispersed after singing India’s national anthem.

Those who addressed the gathering included Labour MP from Ilford South, Sam Tarry who expressed deep concern at the growing fascism in India under Narendra Modi and said that this situation must be causing lot of hurt to the souls of founding fathers of modern India including Mahatma Gandhi. 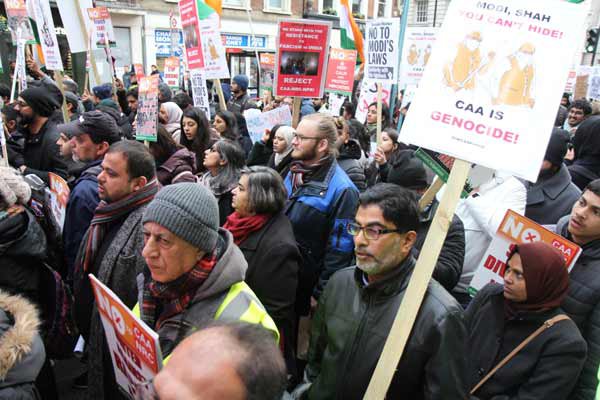 Five Labour MPs who were unable to attend the rally expressed their support in messages sent to SASG, saying: “Some will characterise these movements for democracy as ‘anti-India’. But this is part of a global fight against the far-right— whether in India, Hungary, Brazil, or here in the UK. In South Asia and the diaspora, we can only overcome the politics of division by banding together on what unites us: aspirations for a good standard of living, a decent wage, safety, and a world in which our children can breathe clean air,” said Nadia Whitthome (MP Nottingham East), UK's youngest MP.

Some MPs have written lettersto the British Foreign office and Indian High Commissioner in London expressing their concern on the continuously deteriorating political situation in India.

In a special message, veteran anti-war activist and writer Tariq Ali said, ‘Thank you Modi for uniting Hindus and Muslims.’

The organisers have also written an open letter to Prime Minister Narendra Modi expressing, “our outrage at India's descent into open fascism under your government. Since 2014, we have watched the growing epidemic of mob-lynching, rapes and attacks on Muslims, Dalits, Christians and Adivasis, along with attacks on dissenters, human rights defenders, journalists, lawyers and even judges who dare to speak out and uphold the truth about what is happening in India under your government.”

The letter further said, “The events of the last six months have been particularly disturbing. First the revoking of Article 370, further militarisation of Kashmir , India’s only Muslim majority state, which was already the most highly militarised zone in the world, the imprisonment of its leaders, continued curfews, torture, including torture of minors, and the imposition of  a lockdown  on internet services while outsiders including your corporate friends such as Reliance’s Ambani buy up land in the Kashmir valley. This was followed by the handing over of the land on which the iconic Babri Masjid had stood for some 500 years, before it was demolished by RSS stormtroopers, to a Hindu right-wing organisation for the construction of a massive Ram temple.”

Highlighting BJP-led government's historical anti-Muslim hatred, the letter further said, “We note with alarm that historically mass disenfranchisement of a targeted minority has been closely followed by ethnic cleansing and genocide.'

The letter strongly condemned the CAA and NRC and urged Mr Modi to “to listen to the voices of mass democratic united protest in India and revoke the CAA and abolish the NRC and the NPR as a matter of urgency.”

For more photos and videos from London and other cities protesting CAA-NRC-NPR please visit fb.com/BoycottNRC