There has been a sharp reaction to Turkish President Tayyip Erdogan’s decision to convert the Hagia Sophia into mosque.

The Spectator of UK said: Will the Hagia Sophia be a wake-up call to a West that has so far tolerated far too many transgressions?

The Telegraph said making the Hagia Sophia a mosque is a political slap in the face for the West and it is a blow to the foundations of Turkey’s alignment with the West.

The Globe and Mail argued: What we do know is that the world is a slightly darker and less gentle place than it was a week ago.

Cameron Hilditch of the National Review says Hagia Sophia should either be returned to its status as a museum or remanded into the care of the Greek Orthodox Church, for whose liturgy and worship it was purpose-built so many centuries ago. Otherwise all economic, military, or diplomatic favors from the Western world should be stopped to Turkey.

Greece condemned a decision by Turkey to convert Istanbul’s Hagia Sophia museum into a mosque, saying it would have repercussions not only on relations between the two countries, but on Turkey’s ties with the European Union.

“Greece condemns in the most intense manner the decision of Turkey to convert Hagia Sophia into a mosque. This is a choice which offends all those who also recognize the monument as a World Heritage Site. And of course it does not only affect relations between Turkey and Greece, but its relations with the European Union,” Mitsotakis’s office said in a written statement.

Former Greek foreign minister Dora Bakoyannis and Mitsotakis’s sister tweeted that Erdogan had “crossed the Rubicon” with its decision, effectively moving itself way from the Western world.

Mosques in Greece converted to churches

Tellingly, even though Greece has criticized Turkey for reopening Istanbul’s historic Hagia Sophia as a mosque, the situation of Ottoman-era monuments in Greece tells a different story, with most of them neglected, ruined, or used for purposes, which completely disregard their history, Busra Nur Bilgic Cakmak of the Turkish newspaper Yenisafak wrote Wednesday.

Some mosques were converted into churches with renovations, while others were used as bars or movie theaters for “adult” films. It is estimated that there are over 10,000 artifacts and monuments from Turkish-Islamic architecture in Greece.

While intense criticisms were made from Greece in opening Hagia Sophia for worship, the situation of Turkish-Islamic works in the country draw attention, Cakmak said adding:

Built in 1468 in Thessaloniki, Hamza Bey Mosque was used as a place of worship for a while after Greece gained its independence. In the following years, the minaret of the mosque, made of cut stone, was destroyed, the pencil works in the dome and the writing plates were deleted, while the interlocking wooden pulpit inside was also destroyed. The mosque, owned by the National Bank of Greece in 1927, was later on sold to a private person, divided into a shop and a cinema and used for displaying adult movies until the 80s.

The Faik Pasha Mosque in the city of Narda (Arta) in the Ioannina region was turned into a church after the population exchange between Turkey and Greece in 1923. It is known that the mosque, which was later abandoned, was used as a bar-pavilion in the 1970s.

On the other hand, mosques and historical buildings in many important cities, including the capital Athens, Ioannina, Giannitsa, Crete, Larisa, and Kavala continue to share the same fate.

In Athens, where there is no official mosque open for worship, the oldest mosque -- Fethiye Mosque -- was used for many different purposes such as military prison and warehouse after the end of Ottoman administration in the city.

The mosque -- located in the Roman Agora on the outskirts of the city's Acropolis within the archaeological area -- is believed to be built during the reign of Ottoman Sultan Mehmet II and it was used as a storehouse for historical artifacts until 2010. Fethiye Mosque is now used as an exhibition hall since the restoration works ended in 2017.

The Cizderiye Mosque, located a few hundred meters from the Fethiye Mosque, is in the Monastiraki Square -- one of the touristic places of the city. The mosque is kept closed for most of the year, serving as a ceramics museum for visitors from time to time.

There are no traces of buildings such as Yeni Mosque, Domed Mosque, Ic Kale Mosque, Huseyin Efendi Dervish Lodge, and Haci Ali Bath, which are among the Turkish-Islamic works in Athens and registered in the Ottoman archives as well as yearbooks. 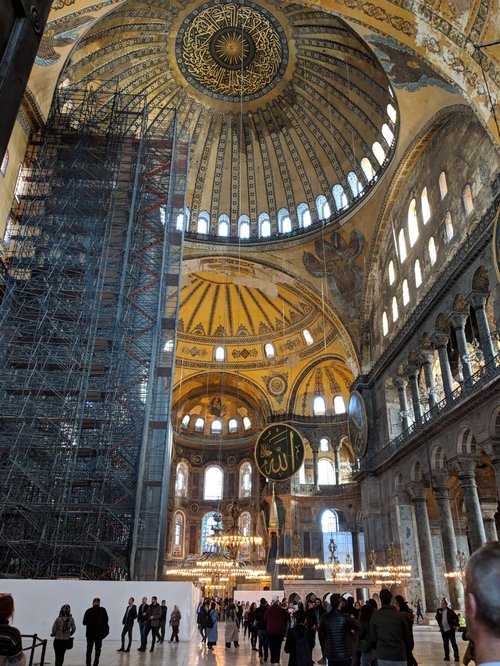 Five Mosques that Converted into Church in Spain

Wikipedia enumerates at least 16 mosques in Spain which were converted into churches. All mosques were built during the Muslim the rule and turned into the church after the defeat of Muslims. Tellingly, several minarets were converted into bell towers for church.

—Abdus Sattar Ghazali is the Chief Editor of the Journal of America (www.journalofamerica.net) email: asghazali2011 (@) gmail.com