Azamgarh: Azamgarh Solidarity Forum organised a seminar on “Dangers facing the Country and our Responsibilities” at Shibli Degree College here on 3 March. Dr. Asad Idrees in his welcome address while speaking about the aims and objectives of the Forum said that whereas on one side after the confessional statements of Swami Aseemanand, terrorist activities and bloody games of Hindutva group and leaders like Sanatan Sansthan, RSS, Abhinav Bharat, VHP, Bajrang Dal, Narendra Modi, Yogi Aditya Nath and others have been openly and clearly exposed, there is no talk of banning these organisations. On the other hand, unnecessary and unjustified ban on SIMI is still in force. He said that the real danger to the country is from Hindu terrorist organisations, corrupt rulers, officers and communalists. Afroz Sahil, who exposed the lies of Delhi police through post-mortem reports of Sajid and Atif with the help of RTI, also spoke and said with a feeling of sorrow that his firm faith in judiciary is hurt. 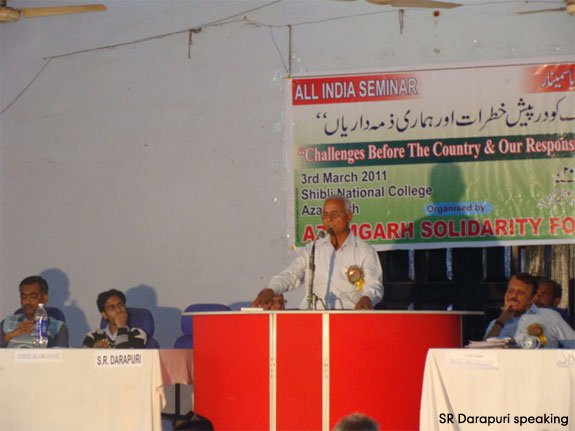 Speaking about some unsolved mysteries of Batla House encounter, Jamia Millia teacher Manisha Sethi said that whereas after a long battle Salman was acquitted of the false charge of complicity in Delhi bomb blast, it is also proved now that Inspector Sharma had died because of excessive bleeding and not because of the alleged firing by the so-called terrorists. She said that the fact that there were bullet injuries on the top of Sajid’s head clearly proves that he was made to sit on the ground below and shot from above. Hence police stories of Batla House encounter are full of lies. Retired IPS officer S.R. Darapuri while speaking in this seminar said that there is no law worth its name in India. He said that we are living in a secular country but after 32 years of my experience as a police officer I can say with full confidence that there is no proof of this in actual practice. He said that the first attack of these elements who want untouchability, discrimination and their superiority was in 1948 with the murder of Gandhiji. These elements are found in every section and every organ of the state: in judiciary, government, administration and others. He said that ‘in my whole life I have got personal experience of how much feeling of untouchability is there in police department, and this is one of the biggest problems in our country’ and added that for solving this, all sections of people should be given representation in bureaucracy in accordance with their population, and Muslims representation in police and army must be increased. He said that we should raise our voice against courts because courts too have become dishonest, living example of which is the recent verdict on Godhra in which justice has been strangled. He demanded that the background of judges who pronounced this verdict should be enquired into.

Dr. Javed Akhtar, chairman of AWMELA, said that the Batla House incident is so painful and unjust that it has disappointed all justice-loving people but thank God that justice-loving Hindus also are with us in this war against oppression. He said that war against such high-handedness and injustice can be fought in a planned and determined manner. For this, he said, we have formed a national-level organisation named AWMELA to fight against such injustices and in the acquittal of Salman we have achieved a great success. He said that in addition to our fight against such injustice, the objective of AWMELA is also to build the future of the nation through education and towards this end we will soon be starting an English-medium school on Islamic model and also to build a standard, charitable hospital for providing good and cheap health services to poor people.

Shahid Badar Falahi, former president of SIMI, said that under a planned conspiracy, media and vested interests have so much maligned Azamgarh through false and baseless propaganda that many innocent and talented youth of this district are rotting in jails and avenues of progress for other talented youths of this district have been blocked. All this is being done under a conspiracy of destroying talent. But, he said, Azamgarh has a glorious past which has produced so many famous personalities, religious and Hadees and tafsir scholars, academicians, literary figures, freedom fighters in the persons of Allama Hamiduddin Farahi, Allama Shibli Nomani, Maulana Abdus Salam Nadwi, Iqbal Suhail, Kaifi Azmi, Shaikh Rajab Ali and a host of others that it will soon regain its past glory.