A huge amount of literature in various languages, European, Asian and Indian, has been translated into Urdu during the course of the past decades and centuries, but the masterpieces of Urdu have not been translated into other languages to that extent, nowhere in comparison to that. This realization was pricking my mind for some time. Individual efforts have been made by scholars here and there to translate Urdu works into other languages, but to my knowledge no concerted or institutionalized and organized effort has been made so far in that direction. 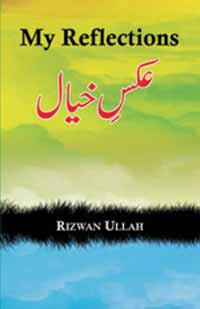 This prompted me to think about doing something whatever was possible within my limited capacity and capability. The obvious next step was to pick my own small and simple poems and translate them into English. In due course it became what the Persian poet has said:

Thus the accumulated translations took a book form. But there lies much beyond this book which must be done. Our Urdu academies, Urdu departments in universities and other organizations have been doing good work in teaching and propagating Urdu but not much has been done in the area I have visualised. We, all concerned should start some organized and institutionalized efforts in the required direction without losing any more time. I hope and wish that The Milli Gazette would prove and provide a forum for such efforts and ideas would get wings at this nesting place.

As for the book “My Reflections,” it is a collection of a little over 50 selected poems and ghazals reflecting personal ethos of the poet and his views on various manifestations in personal and social life. The translation in English makes it possible to share all that with a cross section of people speaking languages other than Urdu and at the same time to encourage all to dig into the treasures Urdu language has been hoarding and hiding for ages. This book is a sort of exhortation to others to break the inertia and come out with whatever presentable they possess. This will be a service to the language and the colourful culture it represents.