New Delhi, 6 November 2013: A high-level delegation of the All India Muslim Majlis-e Mushawarat, umbrella body of Indian Muslim organisations, visited several camps in Kandhla, Shahpur and Sunaithi areas in Muzaffarnagar and Shamli districts to assess the situation of the riot victims who are still stranded in camps. The delegation consisted of Mushawarat President Dr Zafarul-Islam Khan and a leading member Maulana Ataur Rahman Qasmi and included two journalists and a social worker. This was the third such visit by a Mushawarat delegation since the anti-Muslim violence erupted in Muzaffarnagar, Shamli and Baghpat districts of western Uttar Pradesh last September. According to a Jamaat-e Islami Hind survey, 115 persons were killed during these riots – out of which 97 were Muslims. Intermittent cases of murder and attacks on Muslims continue in the area even now.

The delegation visited camps in Kandhla, Kairana and Shamli where it assessed the ground situation and the needs of the stranded and uprooted Muslims who were made homeless by sectarian violence since 7 September when pro-BJP Jats unleashed unprovoked violence against hapless Muslims in Hindu-majority villages. Close to one hundred thousand Muslims fled from dozens of such villages. At least a dozen villages like Phugana, Lasadh, Kutba, Kutbi, Batavdi, etc witnessed murder, burning of Muslims alive, burning their homes, raping women and kidnapping girls etc. Muslims of these villages were the first to flee their homes since 7 September. Muslims in many other villages fled out of fear lest they too become victims of these crimes. A majority of these people took refuge in Muslim majority villages and adjoining areas include forest lands where thousands of tents are pitched even today. Some people who had fled only out of fear have now returned to their villages, while others have either rented accommodation elsewhere, especially in towns, or have gone to live with their relatives in other villages.

The Mushawarat delegation found that the earlier enthusiasm of Muslims of the area and outside has now died down, that tens of thousands of these refugees are braving creeping cold weather in tents mostly made of plastic sheets with little hygienic activities and their food stocks have almost dried. These people are in dire need of ration and heavy blankets to brave the cold weather. Some children have started going to nearby madrasas while thousands of uprooted children are wandering around because no school in the area is willing to admit them in the middle of the school year.

The delegation found out that government supplies hardly reached these camps. Some intermittent supplies of atta and milk etc came from time to time but at present such even such irregular supplies have totally stopped.  Authorities at first tried to forcibly send these refugees back to their villages but most refused to go back. Now the authorities want to open three big camps and to close the dozens of smaller camps found in the districts of Muzaffarnagar, Shamli, Baghpat and even at Loni on the outskirts of Delhi. People are resisting these moves and are planning to settle down near the camps or in Muslim majority villages. 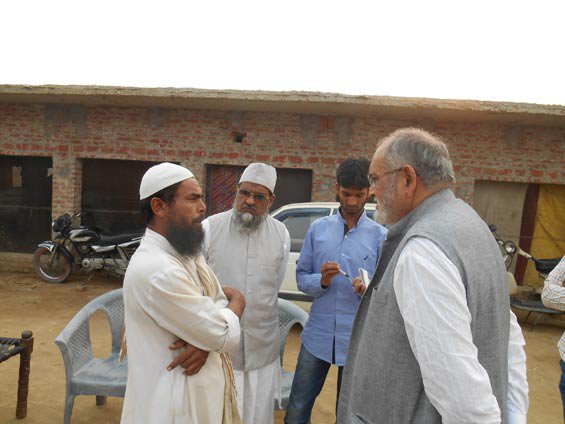 Some organisations and people have started planning to buy land and settle such people there so that they are not harassed by the police or by forest and district authorities.

The delegation found that the Rs five lakh aid announced by the state government for each family is meant only for refugees from 12 specified villages which witnessed murders, violence, arson of homes etc and even this aid is not reaching all the uprooted families entitled to it. One objectionable aspect of this aid is that recipients have to sign an affidavit in which they forsake their right to return to their villages, which means that soon their properties and homes will be usurped by others. It also came to light that no central help has come to these hapless people although the Prime Minister visited some of these camps in mid-September itself.

The delegation found that though some madrasas and local people have rendered a yeoman’s service to help these hapless people in their hour of distress, some local sharks too have started exploiting the situation and are diverting aid coming from outside and selling the same in the market.

While appealing to the people to continue to help these hapless people, Mushawarat requests all donors to physically come to the camps and distribute the aid personally to the deserving recipients instead of sending it or delivering it to managers of camps.

The camp people require ration including dried milk, heavy blankets (razaees with mattresses) and water-proof tents. The camps also need medical help in the form of doctors and medicines.

Concerned donors should come forward to buy land for these refugees who are camping on private or forest land which they will have to vacate soon. Forest department has filed FIRs against them but there is no physical attempt until now to uproot the camps on forest land.

Mushawarat and Charity Alliance, the organisation run by Dr Zafarul-Islam Khan, may be contacted by people willing to buy and donate land to settle these uprooted people. Both organisations are continuing relief efforts. Mushawarat has just ordered 300 blanket and mattress sets which will be ready for dsitribution after a week while Charity Alliance has agreed to buy some land and offer the same to the poorest among the uprooted people.