London (21 July 2019): As part of its ongoing campaign of monthly vigils against attacks on, and lynchings of, Muslims, Christians and Dalits in India London based human-rights organisation South Asia Solidarity Group (SASG) held its second vigil – this timein front of Mahatma Gandhi’s statue in Parliament Square, outside the British Parliament this Sunday.

SASG was joined in by anti-fascist groups and some of Britain’s key migrant organisations.

With demonstrators holding large photographs of the victims of lynchings and murders, a minute’s silence to remember them gave a sombre touch.  This was followed by the reading out of poetry including the resistance poems of the ‘Miyah’ poets from Assam – who are facing FIRs simply for writing poetry. A placard reading ‘Defend the Constitution! Resist Modi 2.0’s Hindu Fascism’ was placed in the arms of a Gandhi Statue overlooking Parliament Square.

A spokesperson for SASG said, ‘Following the general election in India the violence against minorities particularly Muslims has escalated—reaching horrific proportions. Now, violence against Muslims needs no pretext. Being a Muslim is enough! Jai Shri Ram and other similar Hindu religious slogans have become murder cries. Attacks on Dalits, rapes, torture and murders have sky rocketed too. At the same time lawyers, journalists and activists are being attacked, killed or charged often under draconian laws – and India is being ruled by those who glorify Hitler. We are here to give Modi and Amit Shah a message – that the world is watching and that we stand by those who are so courageously continuing to fight fascism in India!” 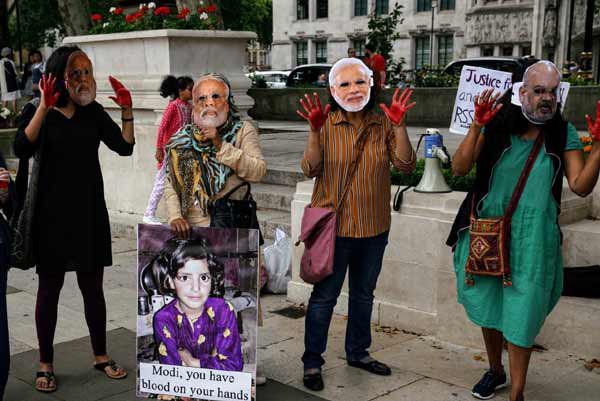 A bulletin of attacks since May 23rd when the election results were declared, prepared by Together for Good (who co-hosted the vigil), was also readout. The document concluded, ‘As the BJP’s tentacles spread across the length and breadth of the country, one no longer needs to state that it is a dangerous time to be an Indian minority (religious, caste, gender or otherwise). A closer look at hate crimes since the party’s re-election suggests that the problem is everywhere, and it is growing more deeply entrenched. There are few discernible patterns, apart from the fact that Uttar Pradesh - ruled by a man who touts his state’s law and order model as the best in the country - continues to throw up some of the most gruesome cases. However, equally shocking stories have been reported from across India - from the rural hinterlands of Jharkhand and Tamil Nadu, to the urban sprawls of Delhi, Mumbai and Kolkata. The victims are usually Muslims, often the poorest, youngest and most vulnerable among them. Stories of helpless Muslims being assaulted and forced to chant Hindu religious slogans (the same slogans BJP’s MPs have been using to accost Muslim and other secular opponents in parliament) are almost too many to count. Dalits, women and Christians are not spared either. The perpetrators are usually radical Hindus, often affiliated directly to the Sangh Parivar machinery. In many cases, they operate with impunity, sometimes aided by the local police and bureaucracy. In some cases, criminal proceedings are initiated against the victims while the perpetrators roam scot-free. Radical Hindutva is no longer creeping upon India, it has already become the order of the day. For the most vulnerable among India’s minorities, the much-feared Hindu Rashtra has already arrived.’ 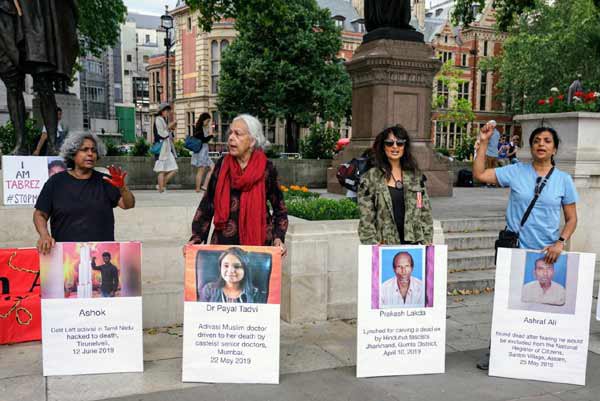 The names of those murdered were read out, remembering each one of them. Following this demonstrators donned Modi masks and reddened their hands with symbolic blood while they shouted slogans such as ‘Modi Modi, you can’t hide, you committed genocide!’ and ‘Modi Modi, Blood on your hands! Modi Modi, we see your crimes’.

Rising communal tension in India has been taking its toll on the mood of Indians in diaspora in UK. As a silent protest against atrocities an anonymous group arranged a digital van roaming around Lord’s Cricket Ground during the World Cup final with a message ‘End Mob lynching’ and ‘Save Minorities in India’

Earlier this month Labour Party MP from Leicester South—a constituency with large number of residents of Indian origin— and UK’s Shadow Cabinet, Jonathan Ashworth, wrote to foreign secretary and prime ministerial hopeful Jeremy Hunt saying, ‘I have been contacted by members of Muslim communities in my Constituency in regard to the on-going violent attacks on Muslims in India.

‘The situation in India is extremely worrying, there have been reports of religiously motivated killings, assaults, riots, discrimination, vandalism and actions restricting the right of individuals to practice their religious beliefs My constituents are concerned that the Indian government is not doing enough to address the on-going attacks on Muslim communities in India.

‘My constituents are concerned that the Indian government is not doing enough to address the on-going attacks on Muslim communities in India.’

Meanwhile, a group campaigning for justice for the whistle-blower and senior police officer Sanjiv Bhatt has launched a website , after he was given a sentence of life imprisonment by a sessions court in Gujarat, India. Campaigners say this was because Bhatt had given evidence against Narendra Modi, the current Indian Prime Minister about his role in the 2002 Gujarat riots which led to the killing of over 1000 people.