Kashmiris are reeling under zulm for the last three decades

Humra Quraishi 27 Aug 2019
What pellet guns couldn’t really achieve is now getting fulfilled by attacking the very survival of the Kashmiris of the Valley.

Why were several prominent parliamentarians from the Opposition political parties denied entry into the Kashmir Valley? So that they don’t get to hear human cries, those appeals to be set free from the caged settings, from the clampdown, from the ongoing barbarity unleashed on the hapless residents of the Valley...Together with that, these parliamentarians didn’t even get to know the whereabouts of their political colleagues in the Valley who have been formally arrested or are placed under house arrest. 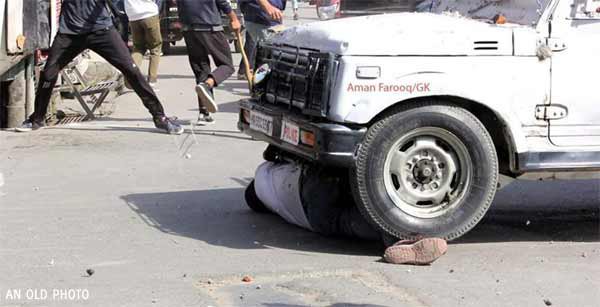 To add to the prevailing mess, only the Right-Wing politicians are ‘allowed’ to enter the Valley. Along the expected format, to mouth the well-scripted speeches, drafted in the corridors of power in New Delhi, along the strain that all’s well and under control and normalcy is fast back on track …all’s okay in the Valley!

Does the government think that in this day and age it can get away with using these fascist tactics? If all is indeed well in the Valley as the Centre and its appointed governor, Satya Pal Malik, claim, then let all of us see for ourselves how very genuine are these sarkari claims! The truth is that the governor sahib lives in a fortified Raj Bhavan where even birds can’t chirp, for fear of getting shot dead. So what to talk of the civilian Kashmiris even thinking of approaching the governor sahib, telling him of the prevailing hellish conditions imposed on them. Needless to add that the governor sahib is not seen walking on the streets and roads and lanes and alleys of Srinagar city to see for himself the ground realities.

What pellet guns couldn’t really achieve is now getting fulfilled by attacking the very survival of the Kashmiris of the Valley. The Kashmiri is surviving without connectivity, without work, without money to run his household, without medical – educational – healthcare facilities, and without a future!

In fact, right from the 1990s I have been reporting on the violence on the Kashmiris. They have never really seen a single stretch of peace ever since. This in itself has left a deep lasting impact on them. The leading medical professionals of the Valley have been all through extremely vocal on this. One of them is the Srinagar-based Dr. Mushtaq A Margoob who is an internationally recognized expert on disaster psychiatry. In fact, I had first interviewed him in 2002, followed by another interview with him around 2010. Whenever severe crisis erupted in the Valley, I got back to him with the request to enlighten me with his observations and comments…

Quoting Dr Mushtaq A Margoob from one of my earlier interviews with him in 2010 - “Jammu and Kashmir has been witnessing a continuous mass trauma situation for more than two decades now. The amount of emotional distress, caused by the perpetual state of uncertainty, insecurity and moment-to-moment living in Kashmir remains anything but hard to imagine. That prevailing violent conditions have led to a high level of suffering among the masses and also resulted in a phenomenal increase in mental disorders is clearly reflected in a series of my published studies since we met last in 2002. More than 58% of the adult population has experienced or witnessed traumatic life events. The disabling disorder PTSD is currently prevalent in more than 7 % of population, so is depression in more than 19 % of people. Women and children are worst affected. Children between the age of 5-12 years living in some orphanages have higher than 40% PTSD, 25% depression and more than 12 % conversion disorder. Kashmir has today become the world’s worst medicinal opium abuse place with more than 3.8 % of the population abusing such substances mostly to induce sleep or get some momentary relief from the continuing agonizing psychological pain and sufferings.”

Dr Margoob had also detailed: “In a man-made disaster situation in any part of the world, harm deliberately caused by others can lead to shifts in societal conventions and processes including an increased sense of rage and entitlement to revenge when mourning loss, or reversal of feelings of helplessness and humiliation. Under such circumstances even the fully grown up adults’ brain automatically shifts operations from highly evolved reality-based action processes to instinctual /emotion-based reactions of fight or flight course of action. Since the young brain is yet to fully develop psychological mechanisms, children/adolescents are much more vulnerable to emotional actions and reactions. When they assume that they are getting pushed against the wallthey get dominated by emotions and stop caring about the consequences. In ensuing collective identity and formation of cohesive clusters, the youngsters identify with the group rather than with their individual identities and can accordinglyget heavily involved in activities that essentially had been unknown in the society earlier. This is how the young have been and continue to be affected in Kashmir….Today’s generation of the young Kashmiris living in the Valley reflect the above referred psychological processes in more than one ways. The recent developments of defying law and order could also be a manifestation of the ever increasing indescribable levels of frustration and anger among this ‘trauma generation’ who have hardly seen a minute of complete peace or tranquillity in their lives from birth to the present stage of adolescence or young adulthood….It is difficult not to empathize with those traumatized children who seem to have lost forever the carefree innocence that is their right. Their lives have been scarred by experiences so horrifying that they are unable to emerge from their despair without help. The haunting demons of memory wreak frightful vengeance on their frail psyche. Trapped as they are in the whirlpool of relived experience; bewildered and frightened; they are agonizingly alone in their pain.”

TODAY THE SITUATION IN THE VALLEY LIES FURTHER COMPOUNDED...

Not to be overlooked, several other compounding factors - the Kashmir Valley could be the only place in the subcontinent if not in the whole wide world with the highest number of half-widows - those women whose husbands got picked up by various security agencies and were never seen thereafter – that is, officially not declared dead/killed but not to be seen either! Also, the Valley has thousands of ‘missing men’ - Kashmiri men who were picked up by the security agencies and thereafter not to be seen. Their mothers and fathers have set up the ‘Association of Parents of the Disappeared Persons’ - APDP. It’s one of those absolutely non-violent organizations of grieving parents, trying to trace out the missing men of the Valley …I have met ageing mothers who have sold off their land and homes to trace out their sons in the various prisons of the country but have not been able to even see the faces of their sons ...Perhaps, nobody has the heart to tell them that in all probability their sons couldn’t have coped with the strain of the interrogations …dying in the process and buried in unknown graves strewn in the Valley.

And now news reports stating that a large number of the Kashmiri prisoners have been shifted out of the prisons of the state to prisons in Uttar Pradesh - to be nearer precision to Bareilly and Agra. This in itself is another blow for the Kashmiris …Difficult, if not extremely difficult, for Kashmiri families to travel out of the Valley for fear of getting attacked by Right-Wing goon brigades and also not getting accommodation in guest houses and hotels…Also, not to be overlooked the weather conditions (of Uttar Pradesh) could be killing for those Kashmiri prisoners ….affecting their very health and survival…the State hitting them in more than one way!

As a Valley Kashmiri summed up the hellish conditions heaped on them by the government of the day, in this one single Hindustani word for tyranny - ‘Zulm!’