Blood becomes a hundred things: warning to the rulers of the day

What if those trees that were axed to death at Mumbai’s Aarey Colony had blood flowing in their branches, then quite obviously blood would be spilling out …spreading out all over the expanse and even further ... Not that, that blood-spread-out sight would have made any difference to the rulers of the day. After all, unmoved they sit, even when human blood flows out, not in surgical wards but along the highways and stretches where human forms are killed ever so frequently in the so-called encounters, fake or otherwise. Yes, today the situation seems such that anybody can be silenced according to the political whims of the rulers of the day. Tell me, how many amongst us questioned the Yogi sarkar of Uttar Pradesh when last summer the facts and figures of encounters in Uttar Pradesh were highlighted: In one year, since March 2017, over 1,100 encounters, 49 people killed, more than 370 injured and over 3,300 arrested across the state! 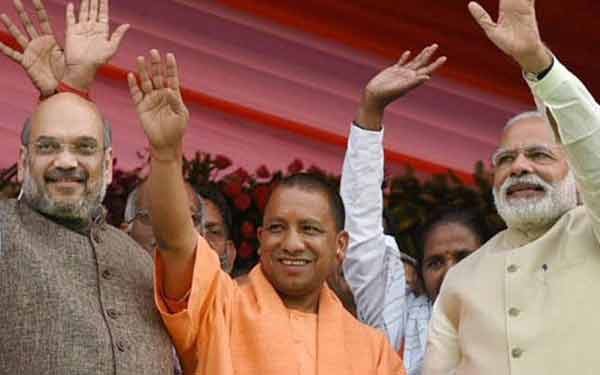 These were the official targets, of one year, in that one particular state of the country! Perhaps, those spared by the state machinery were lynched by the goon brigades nurtured by the rulers of the day. In fact, private brigades/senas have been raised by several of the political who’s who of the day. Why?

Tell me, why are yogis and babas and even particular chief ministers allowed to raise, nurture and maintain private brigades/senas? This in itself is a sure sign of fascism. Just about anyone who dares to oppose, to revolt, can be settled and silenced by goons in these dark times…In an earlier given interview to me, around 2010, Khushwant Singh had commented – “The fascist agenda of Hindu fanatics is unlike anything India has experienced in its modern history…For the last several years I have been seeing signs of fascism creeping in …private senas are used to unleash terror on minority segments and most Indians do not seem to realize the magnitude of this dangerous trend, the very magnitude of intolerance though signs are writ large.”

The growing double standards in governance have begun to bother me as never before. One instance after another when criminal politicians in the sarkaar are killing and silencing. Today, State tyranny has reached campuses where students are treated like criminals. Political mafia is holding sway in university departments, intruding right into the classrooms and hostels and washrooms. Hired political goons are made to enter campuses to cause rifts and with that less of academics and more of a strife torn situation.

Another aspect that has been bothering me about today’s political rulers is the fact that many of them have criminal cases slapped against them, yet they are ruling us! Instead of getting side-lined or ousted for times to come, they have been made rulers. Not to overlook the fact that several of the hard core elements in today’s government are coming up with gutter-abusive-communal comments, yet they are not silenced. They are openly relaying threats to the minority communities. Yet they continue to rule! How dare they!

If you recall, in the summer of 2017 (August 2017) a study conducted by the Association for Democratic Reforms (ADR), a non-government organization working for electoral reforms, brought forth hitting facts on the country’s lawmakers: As many as 51 MPs and MLAs have declared cases of crime against women, including alleged rape and abduction. Of the 51, 48 are Members of legislative assemblis (MLAs) and three are Members of Parliament (MPs)…Giving party-wise details, the study stated that among various recognized parties, the BJP has the highest number of MPs and MLAs (14), followed by the Shiv Sena (7) and the All India Trinamool Congress (6) who have declared cases related to crime against women.

This trend of criminals and murder-accused getting tickets to fight elections seems ongoing …Not to overlook the latest news reports stating that Shiv Sena has fielded Naveen Dalal as their candidate from Bahadurgarh for the assembly polls in Haryana on October 21. He is one of the two persons accused of trying to shoot at Umar Khalid, the former JNUSU leader. Yet he is given a ticket to be an upcoming ruler!

With these facts in the background or foreground, anything can be expected from the rulers of the day. They can go to any extent to silence any form of protest. Even the most non-violent and civilized protestor could be targeted.

Sahir had passed away on 25 October 1980, leaving behind such revolutionary verses …Read along this particular verse of Sahir tucked in the volume “Anthems of Resistance”:

“Tyranny is but tyranny; when it grows, it is vanquished/

Blood however is blood; if it spills, it will congeal/

It will congeal on the desert sands, on the murderer’s hands/

On the brow of justice, and on chained feet/

On the unjust sword, on the sacrificial body/

Blood is blood, if it spills, it takes root/

Let them hide all they want, skulk in their lairs/

The tracks of spilled blood will point out the executioners’ abode/

Each drop of blood will march out, holding aloft a lamp/…

That blood which you wished to bury in the killing fields/

Has risen today in the streets and courts/

When it raises its defiant head, laws will not restrain it /

Tyranny has no caste, no community, no status nor dignity/

Tyranny is simply tyranny; from its beginning to its end/

Blood however is blood; it becomes a hundred things:

Shapes that cannot be obliterated/

Flames that can never be extinguished/

Chants that will not be suppressed.”