It was late in the evening inside JNU campus. Two Muslim students were engaged in a fierce debate. Close to them were standing two girls and a boy. They were silent and holding placards against Congress leader Shashi Tharoor. 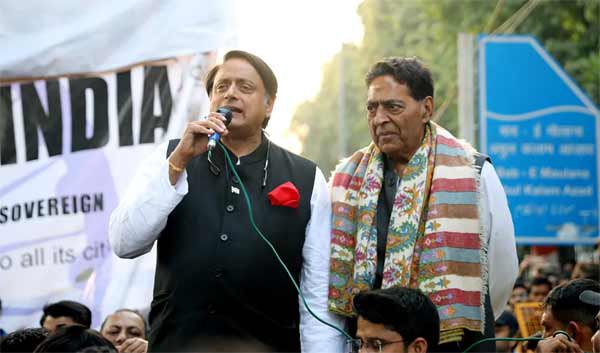 Tharoor was already late by several hours. But the students were patiently waiting for him. Even the cold wind did not deter their zeal. They turned up in large numbers.

"This is not the right time to show our dissent", said a young Muslim student to his friend. He did not support the protesters who were opposing Shashi Tharoor.

"I can understand your point but what is the harm if some are peacefully showing their dissent to Tharoor?" was the reply from his friend.

The point of debate was whether the Muslim students of JNU should have protested against Tharoor over his recent remarks about "Islamic fundamentalism". In a Tweet, Tharoor recently warned that "Our fight against Hindutva extremism should give no comfort to Islamist extremism either. We who're raising our voice in the #CAA_NRCProtests are fighting to defend an #InclusiveIndia. We will not allow pluralism & diversity to be supplanted by any kind of religious fundamentalism".

Much more than what he said, the timing of his remarks seemed to have angered the Muslim students. His remarks came at a time when the ruling BJP charged the anti-CAA protesters of Aligarh Muslim University and Jamia Millia Islamia with raising Islamic slogans.

A large section of Muslims within the JNU campus believed that Tharoor's statement was an act of "soft Hindutva", which the Congress and other secular leaders have often resorted to. They were disappointed to see that Tharoor, like his political "adversaries", the BJP, was "blind" to look at the central theme of the anti-CAA protest, i. e. defending the Indian Constitution and its secular principles. Instead, he spotted, they rued, what he thought were acts of Islamic fundamentalism.

Perhaps, these questions might have been on the minds of the placards-holding students. Unmindful of who was saying what, they looked confident about what they were doing.

The group, which was opposed to holding the protest believed that Tharoor's remarks were "uncalled for" but due to "expediency", they should have been ignored. They cited the "vulnerable" situation in JNU which came under attack from the police-backed Hindutva forces.

"It is time to forge a larger (secular) unity. Holding protest against Tharoor and mixing religious issues with the current crisis would harm our case", said a Muslim student of the Arabic department.

However, the group of the dissenters was determined to stand before Tharoor and say to him in unambiguous terms that they were "believers" and it was within their "religious freedom" to call the name of Allah.

At the site of Tharoor's lecture, the supporters of the protesting Muslim students argued that his remarks exhibited his party and other secular outfits' tendency to resort to "soft Hindutva". In their support, they cited the public display of former Congress president Rahul Gandhi visiting the temple and the advertisement of his possessing "sacred thread". Even Shashi Tharoor, not long back, wrote a full-length book to assert his "Hindu" identity.

These incidents point to the difficulty Muslims are facing to prove their "secular" credentials in a "resurgent Hindu" India, while non-Muslims are presumed to be "nationalists". For example, no one puts a similar test for our top ministers and politicians who publically visit temples and resort to using religious symbols for political gain.

For example, when the act of Prime Minister Narendra Modi worshiping goddess Ganga is live telecast on prime time for hours, it is hardly debated and criticized in the public sphere. When public officials or ministers break the coconut and perform puja before the inauguration of a government scheme, it is seen as a "way of life".

But any show of religious symbols of the minority community creates "fear" among the majority. The invocation of the name of Allah or public appearance of skull cap and burqa is deemed as an act of "fundamentalism" that poses a serious "threat" to pluralism and Indian secularism.

The protesting Muslims students deserve kudos for not letting go of these fundamental issues. It is high time our media and civil society took up these issues for a larger debate.

(Abhay Kumar recently submitted his Ph. D. at JNU. You may write to him at debatingissues@gmial.com)